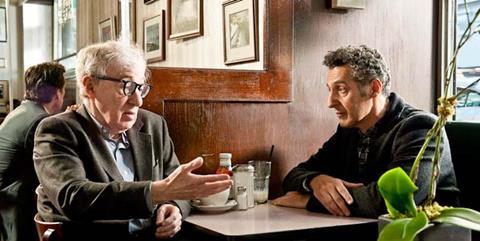 John Turturro and Woody Allen must have had a lot of fun putting together this lightweight sex comedy. Turturro takes full credits as the author but Allen’s touch is visible throughout, whether it is in sending up Brooklyn’s Hassidic community, shooting one-liners by the dozen or in the soundtrack, which seems directly inspired by his films.

Having sex symbols such as Stone and Vergara pay for making love is a riot of an idea in itself, and the same goes for Paradis hiding under a wig and buttoned up to her neck while quoting from the Talmud.

The one thing missing is a tight script to tie it all up. Instead it is left with a gaping soft belly between the bright premise of the first act and the Seinfeld-type epilogue. Luckily, to fill up the time, there are Sharon Stone and Sofia Vergara self-deprecatingly displaying their curves and French singer-actress Vanessa Paradis testing her English in an untypical role. Even if there isn’t much actual sex taking place on screen, their presence is more than helpful.

Allen plays Jewish bookseller Murray Schwartz who has gone out of business because no one is interested in old books nowadays. He shares his lodgings with a black woman and her brood of kids, and is as a prissy hypochondriac New Yorker as only Allen can be. No wonder, because evidently the role was tailored with Allen in mind.

Turturro plays Fioravante, who has been close to Murray since the day when he was caught, as a kid, breaking into the shop, is an unassuming, pleasant fellow, working in a floral shop next door.

Fioravante looks just right to fill the bill, or so it seems to Murray. He is not too handsome, but he is big and solid and sexy and despite his hesitations he goes along because the money is too easy and tempting to ignore. As for Murray, now unemployed, he would certainly love to get a piece of the pie in his new role as an agent…or to put it more bluntly, as a pimp.

With early testing of Fioravante’s performance proving satisfactory money starts to roll in, and the next customer brought into the scene is a young rabbi’s widow, Avigal (Paradis), whose husband is dead and she has six kids and back pains. Murray suggests Fioravante, who now calls himself Virgil, will massage her back. She agrees and surprise, surprise, a budding romance is in the air, but problematic is Dovi (Liev Schreiber), of the Chassidic Decency Patrol is watching, and he also in love with Avigal.

With a plot that is as hard to believe, what’s left is a bunch of character studies, none of them taken too seriously, and a lot of witty dialogue, which is, course, Allen’s supreme territory. He fearlessly forges ahead, explaining to Turturro in detail why he is just the right person to please dissatisfied married women and promiscuous younger ones

Turturro’s considerable capacities to play off-key roles, fits perfectly with the part he had planned for himself. His deadpan countenance is as effective as ever, the contrast between him and Allen lends each one of their conversations a charm of its own, and he exudes a sincere and real sympathy for his clients that most might Casanovas prefer to leave by the side.

Having sex symbols such as Stone and Vergara pay for making love is a riot of an idea in itself, and the same goes for Paradis hiding under a wig and buttoned up to her neck while quoting from the Talmud as if she has done nothing else all her life. Cinematographer Marco Pontecorvo has his own moment of glory in a lovely shot of the sun breaking through the branches of a public garden, as Avigal, the symbol of female chastity, allows a man to take her wig off.