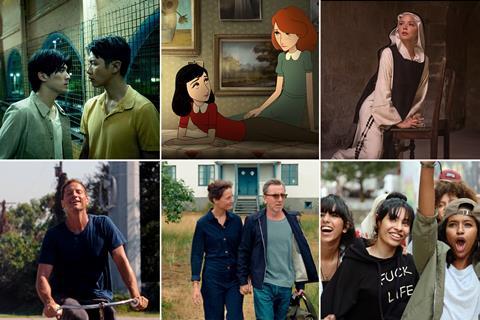 Ahead of the 74th Cannes Film Festival (July 6-17), Screen’s reviews editor and chief critic Fionnuala Halligan has picked out a few of the stand-out titles from the Official Selection and Directors’ Fortnight and Critic’s Week sections.

Full previews of each Cannes strand are below.

Dir. Leos Carax
Leftfield pop legends Sparks narrowly missed working with Jacques Tati in the 1970s but their cinematic hour has come at last. As well as featuring in Edgar Wright’s documentary The Sparks Brothers, Ron and Russell Mael have co-written the hotly awaited musical by elusive auteur Carax, his follow-up to 2012 Competition title Holy Motors. Annette, which is about a singer, a comedian and their baby, stars Marion Cotillard and Adam Driver, and is produced by Charles Gillibert.
Contact: Grégoire Melin, Kinology

Dir. Paul Verhoeven
Dutch director Verhoeven returns to the Croisette with his second French-language feature after comeback film Elle, which played in Competition in 2016 and went on to secure a best actress Oscar nomination for Isabelle Huppert. Benedetta reunites the director with Elle actress Virginie Efira in the role of a controversial 17th-century Italian nun and is adapted from Judith C Brown’s academic work Immodest Acts: The Life Of A Lesbian Nun In Renaissance Italy. Verhoeven first competed at Cannes in 1992 with Basic Instinct.
Contact: Pathé International

Dir. Mia Hansen-Love
French writer/director Hansen-Love is not the Cannes regular you might think, notwithstanding a 2009 special jury prize for Un Certain Regard title Father Of My Children. She makes her Competition debut with an English-language drama starring Tim Roth and Vicky Krieps as a couple visiting the Swedish island of Faro on a cinephile homage to Ingmar Bergman. Co-starring Mia Wasikowska and Anders Danielsen Lie, it marks an official selection double for producer Charles Gillibert, also in Competition with Annette. MUBI has UK rights.
Contact: Grégoire Melin, Kinology

Dir. Nabil Ayouch
Moroccan-French director Ayouch’s Cannes credentials include 2012 Un Certain Regard title Horses Of God and 2015 Directors’ Fortnight selection Much Loved. His debut Competition entry has strong connections with Horses Of God, which was adapted from Mahi Binebine’s novel about disenfranchised youth from Casablanca’s Sidi Moumen slum district who perpetrated a series of suicide attacks across the city in 2007. The incident prompted Ayouch and Binebine to set up a cultural centre in the neighbourhood in 2014. This film is inspired by one of its workshops encouraging youngsters to express themselves through hip-hop music and dance.
Contact: Antoine Guilhem, Wild Bunch International

Dir. Julia Ducournau
French writer/director Ducournau scored a significant hit with cinephiles and among the gore crowd with her debut Raw, which screened in Critics’ Week 2016. As she returns with her much-awaited follow-up, all that is certain is the title alludes to the metal titanium; that the plot involves a series of murders and a young man returning 10 years after his disappearance; and that it stars Vincent Lindon and newcomer Agathe Rousselle.
Contact: Antoine Guilhem, Wild Bunch International

The Velvet Underground (US)

Dir. Todd Haynes
Haynes, who was last in Cannes with 2017 drama Wonderstruck, returns with his eagerly awaited documentary chronicling the 1960s and early 1970s heyday of the influential avant-garde US band of the film’s title. Producer Killer Films has collaborated with Haynes over the past two decades on films including Carol, Far From Heaven and I’m Not There, and the doc includes previously unseen performance footage. Apple TV+ holds worldwide rights.
Contact: AppleTV+

Where Is Anne Frank (Bel-Lux-Isr-Neth-Fr)

Dir. Ari Folman
This is the third film from Israeli director Folman to premiere on the Croisette, following 2008’s Waltz With Bashir, which played in Competition and was nominated for best foreign-language film at the Oscars, and 2013’s The Congress, which bowed in Directors’ Fortnight. Where Is Anne Frank follows Kitty, the imaginary friend to whom Anne Frank dedicated her diary, as she embarks on a journey through modern-day Europe. It is produced by Luxembourg’s Samsa Films, which is also behind Joachim Lafosse’s Competition entry The Restless.
Contact: Antoine Guilhem, Wild Bunch International

Dir. Justin Chon
Chon’s timely tale sees the filmmaker/actor star opposite Alicia Vikander as a Korean man in Louisiana struggling to make a better life for his family when he learns he could be deported. Focus Features snapped up the film at the virtual Cannes market last year and will release in the US on September 17. Charles D King’s Macro (Judas And The Black Messiah) and eOne financed the project. California-born Chon starred in the Twilight series and has been gaining stature as a director. His Los Angeles riots drama Gook won the audience Best of Next! award at Sundance in 2017.
Contact: Focus Features

Dir. Eskil Vogt
Vogt has a doubleheader at Cannes — he is also co-writer of his frequent collaborator Joachim Trier’s The Worst Person In The World, which is in Competition. The Norwegian filmmaker’s second feature as a director after 2014 Sundance award winner Blind is a supernatural thriller that sees the innocent play of four children turn into something else when they harness special powers. Maria Ekerhovd produces for MER Film, which will also release in Norway. Actress Ellen Dorrit Petersen (Blind) reteams with the director, and her daughter Rakel Lenora Flottum takes the lead role as nine-year-old Ida.
Contact: Protagonist Pictures

Dir Clio Barnard
Barnard’s three previous features — hybrid documentary The Arbor (2010) and dramas The Selfish Giant (2013) and Dark River (2017) — launched at Tribeca, Cannes Directors’ Fortnight and Toronto respectively. She now returns to Quinzaine with a film based on people she met while making The Arbor and The Selfish Giant in the city of Bradford, northern England. This tale of romance between two lonely souls stars Adeel Akhtar and Claire Rushbrook and is produced by Tracy O’Riordan, with backing from BBC Film.
Contact Altitude Film Sales

Dir. Panah Panahi
Iranian master Jafar Panahi’s son Panah makes his writing and directing debut with Hit The Road – Panah having previously served as editor on his father’s 3 Faces. The story is about a chaotic family road trip across a rugged landscape, and the cast includes Hassan Madjooni, Pantea Panahiha and newcomers Rayan Sarlak and Amin Simiar. Veteran cinema­tographer Amin Jafari (Drum, 3 Faces, Ballad Of A White Cow) is among the key crew. Panahi Sr is part of anthology The Year Of The Everlasting Storm in Special Screenings.
Contact: Hengameh Panahi, Celluloid Dreams

Dir. Jean-Gabriel Périot
France’s Périot has strong roots in non-fiction: his two previous features are documentary A German Youth (Berlin 2015) and drama Summer Lights (San Sebastian 2016), which is about a documentary filmmaker. This new work is based on Didier Eribon’s memoir about returning to his hometown after 30 years, which was previously adapted into a performance piece (for Manchester International Festival 2017) starring Nina Hoss as an actress taping a voiceover narration of the book. Périot’s film tells its story through archive images and narration by Adele Haenel (Portrait Of A Lady On Fire).
Contact: The Party Film Sales

Dir. Joanna Hogg
Hogg’s semi-autobiographical The Souvenir — about a film student (Honor Swinton Byrne) falling under the spell of a charismatic, manipulative man — won Sundance’s grand jury prize for world cinema dramatic in 2019. The BBC Film-backed Part II sees the return of Swinton Byrne and her mother Tilda Swinton, adding Harris Dickinson, Joe Alwyn and Charlie Heaton, while also beefing up the producer roster with Element’s Ed Guiney, Andrew Lowe and Emma Norton joining Hogg and Luke Schiller. A24 distributes in the US, and Picturehouse Entertainment in the UK. The original The Souvenir also plays Quinzaine this year as a special screening.
Contact: Protagonist Pictures

Dir. Vincent Le Port
Le Port’s previous directing and producing credits encompass drama and documentary of vary­ing lengths. Bruno Reidal — his official feature debut as director — is inspired by the true story of an event that occurred in France in 1905, when a 17-year-old seminarian murdered a child and then surrendered to the authorities. In Le Port’s film, the youth faces a panel of doctors who order him to write his life story to cast light on his actions. Le Port’s own Stank produces alongside Capricci Films, which also distributes in France.
Contact: Clément Chautant, Indie Sales