Don’t Look Up scored a monster hit with audiences when it landed on Netflix in December. Filmmaker Adam McKay tells John Hazelton about his creative approach to four memorable scenes in the allegorical climate-change comedy. 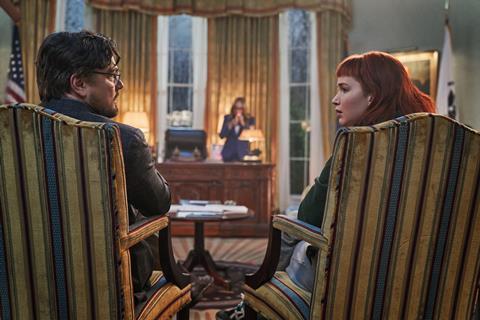 Adam McKay was worrying about the climate crisis when the idea for a killer-comet story came up. The writer/director/producer, known for comedies ranging in tone from Anchorman and Step Brothers to The Big Short and Vice, recalls talking to US journalist David Sirota “about how the media doesn’t cover what is empirically the biggest story in human history. And David said, ‘Yeah, it’s like the asteroid’s coming in Armageddon and no-one cares.’ I couldn’t shake that. I thought if people could laugh and at the same time feel that urgency, this could be really good.”

The result is Don’t Look Up, McKay’s Netflix-backed satire (on which Sirota gets a story credit) following low-level astronomers Kate Dibiasky (played by Jennifer Lawrence) and Dr Randall Mindy (Leonardo DiCaprio) as they struggle to warn indifferent politicians, upbeat TV hosts and a social-media-obsessed public about a comet set to destroy Earth in six months’ time.

Shot early in the pandemic and boasting a star-studded ensemble — Meryl Streep, Jonah Hill, Cate Blanchett, Tyler Perry, Mark Rylance, Ariana Grande and Ron Perlman all join Lawrence and DiCaprio — the film took some critical hits but topped Netflix’s English-language global chart for three weeks after its late-December release, and now stands as the streamer’s second most popular film of all time.

Don’t Look Up has also emerged as a dark-horse awards contender, with four Bafta nominations (including best film and best original screenplay) and the ensemble earning a Screen Actors Guild awards nomination for outstanding cast performance.

Screen International spoke to McKay about four key scenes from the film (please note, some of the director’s comments contain spoilers).

Kate and Randall meet the president in the Oval Office 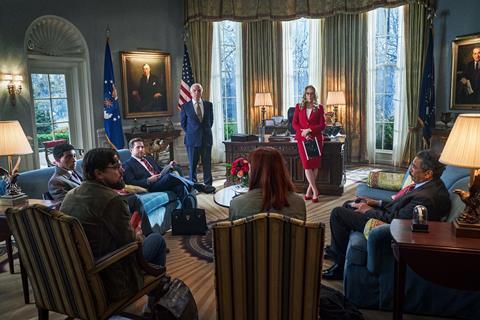 The scene: Soon after spotting the comet headed for Earth, Kate, Randall and Planetary Defense Coordination Office head Dr Teddy Oglethorpe (Rob Morgan) go to the White House to explain the implications to US president Janie Orlean (Meryl Streep) and her sycophantic son and chief of staff Jason (Jonah Hill). The president opts to “sit tight and assess”.

Adam McKay: “That’s the scene that sets the tone for the entire movie. It’s a strange movie in that it’s a ridiculous comedy yet at the same time very tragic and dramatic, and this was the definitive scene. If we didn’t get it right it would throw the whole movie off.

“We shot it over three days, with a lot of angles and a lot of coverage. And we got amazing performances — Streep was crazy, Jonah was doing brilliant improv, all the actors were doing improv. So I was really happy with the filming, and the footage looked beautiful.

“My editor Hank Corwin cut a rollicking, insane version of the scene that was 12 or 14 minutes long. But with our goal of this being a worldwide movie, I wanted to test-screen it. And when we did that the audience just checked out. I don’t let test screenings dictate what I do, but I could feel the movie unplug at that point and the energy drain.

“What we learned was that the audience was very divided. The scene was exaggerated because we felt like the world we’re living in is utterly rudderless. Then the audience went, ‘No, a bunch of us think there is a rudder.’

“The insane version totally shook the audience — they no longer had a straight line. You have this comedy dynamic where you have to keep your straight line alive in order for the jokes to puncture it. Fortunately, we had done a lot of improv and there were a lot of different tones in it. We needed the Oval Office to have authority, so we re-edited, pulled some things back and let some things explode, and we had to do that with every beat in the scene.

“We worked it for five, six months. I’ve done three movies and a TV show with Hank and we’ve never encountered such a beast of a scene. I’m going to put [the original version] out at some point.”

Kate and Randall appear on The Daily Rip 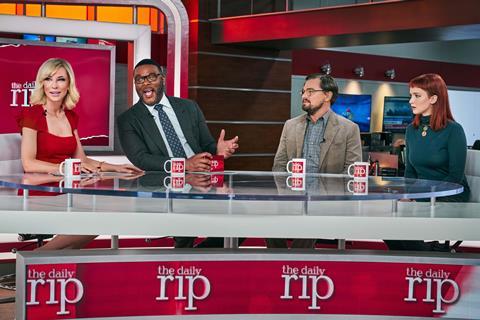 The scene: Hoping to alert the public directly to the impending disaster, Kate and Randall agree to be interviewed on The Daily Rip, a fluffy morning TV show hosted by the smart and glamorous Brie Evantee (Cate Blanchett) and the charmingly dumb Jack Bremmer (Tyler Perry). Kate gets frustrated with the hosts and storms off the set, while Randall is distracted by Brie’s attentions.

Adam McKay: “That scene shows our ‘corporate good-cheer’ media rolling over the truth, which obviously has been happening a lot over the past 10, 20, 30 years. So it’s both preposterous and funny, but at the same time very real.

“There were a couple of things that needed to happen with the scene that were very difficult. One was the set, which [production designer] Clayton Hartley and his team designed in an out-of-business car dealership. Normally with a scene like that you would have the camera perspective and one angle, but I told them it had to feel like it does when you actually go on these shows — which as a writer/director I’ve done a few times. It always feels vast and disorienting, and so we needed depth to it — and Clayton did an incredible job.

“From Linus [Sandgren, director of photography], I wanted that shot of the point of view when they go on stage and how weird it feels. That’s a key moment for Dr Mindy — he’s in this pressure situation and he actually does pretty well and the beautiful host of the show flirts with him, and everyone says how great he looks.

“The other thing the scene needed was the chemistry between Cate and Tyler playing Brie and Jack. A character says earlier that they have ‘legendary chemistry’, but good luck with that when you have actors who were not able to rehearse in person — though we did some Zoom rehearsals — showing up on the day during a pandemic.

“Fortunately, I had two of the most talented actors you could ever have, full of charisma and ability. It was amazing when they showed up and met in person for the first time wearing their weird masks and plastic covers — within five minutes they had this chemistry that was incredible.

“I told them to use the script as their guideline but to play around with it. So what you see in that scene is a tour de force of two great actors who know how to listen and collaborate.”

President Orlean tells the world about the killer comet 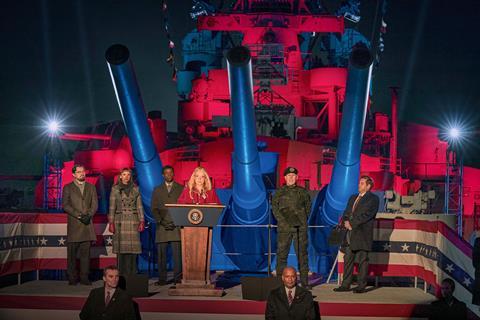 The scene: From the deck of a battleship, president Orlean, with Randall and Kate nervously in attendance, addresses the world and names mercenary Benedict Drask (Ron Perlman) to lead a mission to knock the comet off course. The speech is intercut with the president at a White House meeting two nights earlier, and viewers watching on TV.

Adam McKay: “We’ve seen a lot of presidents do those bizarre, manicured speeches in front of symbols. This is a rich American tradition, dating from that moment when America decided to stop living in reality and everything became a photo op. And it goes across the red/blue divide. [Former UK prime minister] Tony Blair was a fan of them as well.

“That battleship was an actual location. I’d originally scripted it as being in front of the Washington Iwo Jima monument and they have a smaller version of that in Massachusetts so we were going to film there, but Mark Fitzgerald, our Boston location scout, knew about the battleship.

“I scripted the scene with the cuts between the curated speech on the battleship and the White House, the idea being that it was a ‘time dash’ back and forth. And Hank [Corwin] said it worked really well like that. He’s an unusual editor, with this sense of timing and perspective that I think captures the real world we live in, with this crazy bombardment of information, in a funny and surprising way.

“I love time dashes and breaking time. Twenty years ago, it would have been an unusual way to frame the scene, but audiences have become so sophisticated and are used to so many challenging ways of telling stories. In some ways classical narrative structure doesn’t apply now — it’s not the way we’re living now. Our stories are not just simple stories, we’re always living in about four or five stories. And comedy is always based on surprise and people being slightly off balance, so the intercutting helped with that as well.

“What I love about the sequence is you’re seeing the president, who’s a master of media spin, planning the manipulation that’s coming and then you’re going directly to the manipulation. And then the third element is you’re cutting around the world to people watching it on TV and social media. From my first time working with Hank on The Big Short, both of us were interested in capturing that chaotic feeling of social media.

“Ron Perlman’s character was also about trying to capture that feeling of what it’s like to be alive now. There’s always some politically incorrect, larger-than-life character bouncing around our world and I wanted that to be Colonel Drask.”

The BASH mission launch and the Mindy family dinner 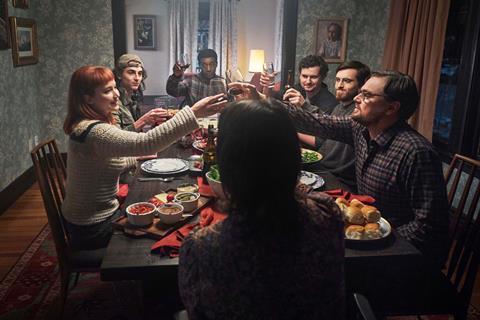 The scene: Peter Isherwell (Mark Rylance), billionaire head of tech company BASH, oversees a disastrous attempt to break up the comet and mine it for rare minerals. The launch is intercut with Randall, Kate, her new friend Yule (Timothée Chalamet) and Dr Oglethorpe returning to Michigan for a dinner with the Mindy family as they await the comet’s arrival.

Adam McKay: “The big difficulty with this sequence was that there’s a tonal shift going on — you’re coming out of this almost farcical comedy and reality is starting to emerge. We’re changing the tone of the movie and that was something I talked about a lot to the actors during filming.

“It was also difficult for our composer, Nicholas Britell. Like Hank, he had a difficult job on this movie, probably most of all for that sequence because he had to create this rich emotional music.

“The visual-effects work [on the BASH ships and the comet’s impact] was, once again, very tonally tricky. You wanted it to be sort of poppy — like a Marvel movie — but at the same time to be photo­realistic. The BASH launch is a key sequence and it couldn’t feel fake — it had to have a power and force to it.

“I worked with Raymond [Gieringer, visual-effects supervisor] and Dione [Wood, visual-effects producer] in the same way I work with actors. I let them know they had carte blanche to throw ideas my way. My philosophy of directing is to get really good people in the building and let them bounce off each other. That whole ending sequence is a great example of it.”