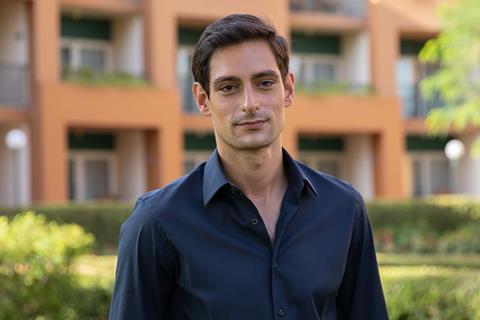 Moroccan actor Brice Bexter El Glaoui will hit the big and small screen in the US this January in director Hicham Hajji’s Hollywood-style action thriller Redemption Day, starring Gary Dourdan, Serinda Swan, Andy Garcia, Ernie Hudson and Robert Knepper. He plays a young Moroccan secret service agent who comes to the aid of Dourdan’s lead character, an ex-US marine on a mission to save his kidnapped wife.

The actor’s name reflects a rich mixed heritage. Born in Switzerland, he was raised in Morocco by his maternal grandfather, the celebrated late artist Hassan El Glaoui, and French-born grandmother Christine Legendre. His father is British, with Czech roots on his paternal side.

“I have everything in my blood and my family was open-minded enough to teach me to make my own choices in life,” says the actor, who is often credited simply as Brice Bexter.

He thanks his grandmother for encouraging him to pursue acting when he disengaged from school as a child. “I was daydreaming a lot and my teachers suggested therapy but she didn’t like that approach and suggested theatre instead,” he recounts.

Bexter had his first taste of a film set when Ridley Scott’s thriller Body Of Lies, starring Leonardo DiCaprio and Russell Crowe, touched down in his home city of Rabat in 2007. He auditioned for work as an extra and ended up being hired as a stand-in for two months, thanks to his fluent English and height. “It was like a dream,” he recalls. “I was 17 years old and on that set for two months, where I got to meet all these people and see them work.”

A summer workshop at New York Film Academy followed, and then a year-long stint at the Lee Strasberg Theater & Film Institute. At his grandparents’ behest, Bexter agreed to do a BA and MSc in management at University College London but used every spare moment accruing experience in front of the camera. “I visited all the film schools, seeking out the student directors who needed actors for their end-of-year projects. I ended up with a pretty decent showreel.”

On graduating, he returned to Morocco in 2016 to be close to his ageing grandparents, just as the country’s local and international locations production scene was gaining in strength.

His Morocco-shot credits include Miss Fisher And The Crypt Of Tears, drama Greetings From Isis and Redemption Day. The latter is an exciting development for the Moroccan film industry, as it is the first Hollywood-style action thriller to be driven by a local producer and director.