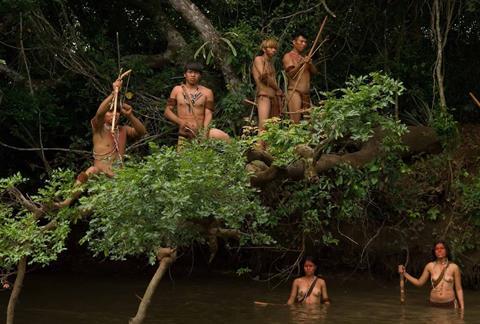 The vexed question of Indos land rights provides the springboard for a thoughtful, engaged but unpolemical drama about the ongoing effects of colonialism in Italo-Argentinian director Marco Bechis’ fourth film. It’s also notable in being the first commercial film to feature Guarani Indians in lead roles, rather than (as in The Mission or Fitzcaraldo) as background colour. But though the natives-fight-back story is stirring enough, and the Brazilian Mato Grosso backdrop allows for some ravishing landscape photography, there’s a problem at the heart of this culture-clash film, which leaves too many themes hanging (rich farmers versus dispossessed hunters; the ironies inherent in expensive, ‘sustainable’ tribal and eco-tourism; rebellions against unreliable fathers).

That didn’t stop Birdwatchers from receiving an enthusiastic reaction at its Venice press screening, and its high-class production values, insider’s view and laudable liberal agenda will earn it far more widespread distribution than Bechis’ grim previous duo of films set against the background of Argentina’s former military dictatorship. In fact, Celluloid Dreams may have a small arthouse seller on their hands.

The enjoyable opening sequence pulls the carpet neatly from under Western audiences still held by the myth of the untouched savage. A cluster of semi-naked, clay daubed tribesemen stand glowering, weapons in hand, at a group of Western birdwatchers as they glide by in a canoe. We cut to a truck, where the expedition guide is paying off the Indos, who are busy putting their Western clothes back on, for their riverbank performance.

The suicide of two young tribespeople, which is a serious problem among present-day Indos, spurs headman Nadio (Vilhalva) to lead the group of Guarani he presides over out of their government reserve. They set up camp by the side of the road on the edge of a rich farming estate that now occupies their ‘tekoha’ (tribal homeland). The film cuts between the family of the landowner (Medeiros) and the tribal unit as tensions mount.

Both groups are dominated by unreliable fathers. The landowner is a one-dimensional bigot who is out of tune with both his wife (Caselli), who runs the birdwatching tours, and his bored, sexually charged teenage daughter Maria (Pereira da Silva). But Nadio too is a flawed hero with a taste for the bottle who refuses to let his charges work for the plantation owner bosses even though, as their hunting skills have atrophied and the available game has been decimated by intensive farming, they desperately need money to buy food. A romantic subplot involving trainee shaman Osvaldo (da Silva Pedro) and Maria holds out some hope that the young generations may not perpetuate the prejudices of the fathers, but it fizzles out before much is made of it.

Bechis is a confident director, good with actors and skilled at showing little touches like the glimpses we get of the landowner’s swimming pool which is decorated with trendy tribal motifs. But though admirable in itself, his impulse to tell the story from the native point of view, dwelling on life in the roadside camp, dampens much of the conflict. More time is needed with the landowner and his wife, more time exploring the birdwatching tribal tourism theme, and more time deepening the loyalty conflicts of the underdeveloped ‘scarecrow’ (Santamaria), a farmhand whose job it is to guard the field next to the Guarani encampment.

Helcio Alemao Nagamine’s unshowy photography makes eloquent points about the effects on the landscape of intensive biofuel cultivation, and brings a warmth to the indos scenes without giving in to the temptations of tribal exoticism. And although the striking soundtrack which includes choral works by early eighteenth-century composer Domenico Zipoli seems like an odd choice at first, it grows on one. And it is justified by a line in the final credits informing us that Zipoli, a Jesuit missionary in Argentina, was known as the ‘Indos composer’. A final website listing for tribal protection activists Survival makes it clear that Bechis’ passionate film wears its heart very much on its sleeve.