Corneliu Poromboiu’s third film to play at Sarajevo Film Festival, When Evening Falls On Bucharest Or Metabolism is also his first to be included in the festival’s competition. 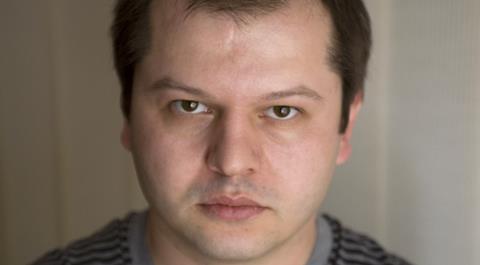 Known for his dead-pan humour and penchant for playing with form and content, Porumboiu’s new work is about making of a film - but we never see the actual shoot.

Porumboiu talks to ScreenDaily about how his film-making is developing, what is the significance of body language in his film and how important instruments are both in real life and film.

You seem to be getting more minimalistic with each new film.

Each film is like an adventure and is in a sort of debate with the films I made before. Everything that I make stems from something that I already made and things I saw in those films but didn’t speculate enough on, themes I want to tackle more deeply and take them in a different direction.

In Police, Adjective I was working a lot with a sort of double language: body language and what people actually say. Especially for the main character [film director Paul, played by Bogdan Dumitrache] I was thinking of a kind of schizophrenia or dichotomy between his stature and movements on one hand and the way he speaks on the other. This is something I wanted to develop more: a dialogue that is clearly written for film and body movement which more theatrical.

How did you develop the characters which are coming from your own world, that of film-making?

Each character is a reflection of something. I like to work on the surface. You just see the characters the way they appear to you, but you don’t have their biography, you don’t exactly know their psychology. You actually only focus on them because I’m using such long shots.

I didn’t want to psychologise. I wanted my film to be like a broken mirror in the way Stendhal defined a novel as a mirror one carries. It is something that you simultaneously have access to and you don’t. You can get to the reality of things when you approach them, but you can’t explain them. You have parts of the picture, but never the full picture.

I also wanted to question the type of objectivity when you make cinema. It is about the way you are and how your body reflects the world outside.

When it comes to body language, the director character in the film is eating differently from the actress, played by Diana Avramut- he is chewing very quickly and loudly, while she is eating more normally.

It is the way he approaches life- he eats very fast, that is the way he is consuming not only food, but the way he lives. One night before shooting he wants to change the script- it is his way of being. At the same time, it’s a metaphor- he processes his reality in a particular way and that’s what he puts on the screen as well.

This is a film about making of a film but we never see the actual shooting. Simultaneously, every setting the characters are in feels like a film set, not like a real-life place. And the relationship between the two characters feels quite mechanical, there does not seem to be much emotion there.

Here I also forced the film little bit on to the theatrical side, I wanted these locations to look like a stage. Also, a film shooting is a kind of microclimate, and there is a special kind of exchange of energies. But it is not real life, it is a film set. Each member of the team does something to arrive at the object of the film. These are not normal relations, so there is emotion, but it is different from emotion in real life.

Do you agree with the main character when he says that in 50 years, film will exist but it will be something else?

I do, film is changing very fast. But my scope with that scene was not to make theory about cinema, it is more about limits and instruments. He, as a director, used to work with a certain type of limits and instruments. When instruments are changing, consequently, the object will change too. All this is coming from my own experience in film school when we were limited to a certain length of tape and to availability of equipment. In a way, these factors determined the what kind of films we were making.

The discussion about Chinese and European cuisine in the film also has to with instruments and how important they are. Just like in Police, Adjective, where it is the language that defines the law, here the way we work and what instruments we use and how they are changing our perspective defines the object of the work. Film itself is also an object, it is consumed – eaten, if you wish - by the spectator.