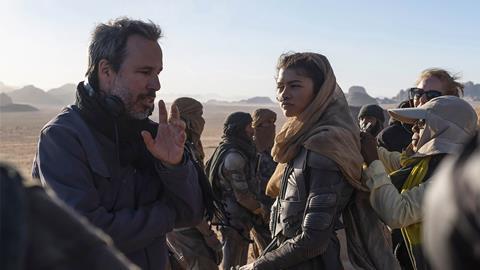 Denis Villeneuve has been obsessed by Dune since reading Frank Herbert’s book as a teenager, four decades ago. The Canadian filmmaker tells Screen how he realised his most ambitious film to date.

When David Lynch’s adaptation of Dune was released in late 1984, Denis Villeneuve was at the front of the line. After all, Frank Herbert’s cosmic epic was the then-17‑year-old Quebecois’ favourite book — “a masterpiece”, no less, which he had discovered and devoured just a few years earlier. On leaving the cinema a few hours later, the young Villeneuve felt “half-satisfied” by Lynch’s vision (which, to be fair to the creator of Eraserhead, was heavily compromised and bastardised — but that’s another story).

Villeneuve was impressed by its casting and design, especially the costumes. But he was also frustrated by its deviations from the novel. It did not bear the spirit of Herbert’s prose, he felt. Something had been lost in translation from page to screen. Though disappointed, he had a reassuring thought. “Somebody else will do another adaptation one day,” he said to himself. “It will happen again.” Of course, it did not cross his mind that, eventually, that somebody would be him.

Almost 37 years later, Villeneuve is enjoying a triumph that eluded Lynch, whose Dune infamously bombed, and Alejandro Jodorowsky before him (though the collapse of the French-Chilean auteur’s ambitious attempt is another, even longer story). Villeneuve’s epic, $165m-budget, Imax-calibrated take on Herbert’s book — or, to be specific, its first half — was closing in on $400m at the global box office at press time, having begun a staggered rollout from mid-September. The reviews have been overwhelmingly positive, with critics impressed by his expansive vision, largely captured in-camera, and the quality of his ensemble cast, which includes Oscar Isaac, Rebecca Ferguson, Zendaya, Stellan Skarsgard and, in the lead role of interstellar messiah-to-be Paul Atreides, Timothée Chalamet.

On meeting Screen International in London just two days before the Warner Bros- and Legendary-backed film’s late-October release in territories including North America, the UK, China and South Korea, Villeneuve seems as impressed as anybody by what he has managed to achieve. But do not mistake this for self-congratulation. It is almost as if he is viewing his own work through the lens of his 17-year-old incarnation. “I was surprised,” he says of the cast he gathered. “I remember going back to my office one day and looking at the wall and saying, ‘Whoa, that’s an awesome team we have put together!’ There was a lot of enthusiasm in the acting community because it’s a beloved book.”

You would be hard-pressed, however, to find someone in Hollywood who loves the book more than Villeneuve. When he first read it at age 13, he primarily identified with Paul Atreides, the young noble who is drawn into a colonial conflict on the desert planet of Arrakis, valued for a unique resource, the spice melange, that is essential to space travel. “I was moved by Paul’s curiosity, his appetite for a new culture and how he found a home in that new culture — the Fremen culture [native to Arrakis] — and how he felt finally complete, coming into contact with it.”

This so inspired Villeneuve he would, to some small degree, mirror Atreides’ journey as a nascent filmmaker with the Canadian Broadcasting Corporation. “I was making documentaries all around the world, going into different countries and having multiple culture shocks. I remember how gratifying, fulfilling and nourishing it was, that experience of being in contact with people from other cultures or religions.”

For all his connection to the book, it is not easy to discern Dune’s importance to Villeneuve from his early features, which are all grounded, often gritty, contemporary dramas, with the likes of 2000’s Maelstrom and 2010’s Incendies earning accolades at the Canadian Screen Awards (he is a four-time best director and three-time best picture winner in his homeland). But the idea of one day tackling Herbert’s novel was always there, bubbling away in the back of his mind; while shooting in Jordan for Incendies, for example, he found himself marking particular locations as potential doubles for Arrakis.

More recently, Villeneuve has enjoyed the opportunity to exercise his sci-fi filmmaking muscles, exploring alien visitation in 2016’s Arrival and artificial intelligence in Blade Runner 2049, released a year later. The desire to play in this genre is, he insists, “something that was burning inside me for a long time. I was a geek, a sci-fi aficionado. I grew up reading tons of sci-fi graphic novels which came out of France and Belgium — by people like Enki Bilal, Jean-Claude Mezieres and Moebius, artists who technically created modern science fiction at the beginning of the ’70s. They influenced everybody, and I was influenced by them too. They made me want to learn how to make movies. It’s not that I’ve recently turned toward science fiction. I’ve come back home to it.”

However, he insists that, as a filmmaker, it has not been a huge leap for him, from drama to sci-fi. “Even when I make science fictions, it’s always the same — it’s an exploration of the human condition from different angles. I’m interested by humans.” This is new territory for Villeneuve in one sense, though. “All my previous films were rated R, because of their violence or their dark ideas. This time I wanted the movie to be PG-13, to reach a young audience that might be curious to maybe open the book later.” An audience, he notes, that is around the same age he was when he first discovered the novel.

Villeneuve made no secret of his dream to finally do Dune justice on the big screen, and it just so happened that, shortly after securing the rights to the novel, Legendary’s Mary Parent read an interview with the director at the 2016 Venice Film Festival where he once more confirmed he would love to adapt it. “She called me, I went to her office and the meeting lasted 45 seconds,” he laughs. “Honestly. I walked in, we shook hands and we said, ‘Let’s do this together.’ There was no pitch. It was just a mutual desire.”

Villeneuve was given the freedom to bring Herbert’s worlds to life through Imax cinematography, practical set builds and challenging location shoots, which took him into the virgin sands of Military Dunes on the Jordan/Israel border — a protected area previously closed to civilians.

“There were no tourists there and it was a perfect playground for us,” Villeneuve says. “Jordan is an area of the world I know well, and we shot in areas that even Jordanians don’t know. The best time for me was during the weekends when I took my second unit — a super small, Navy SEAL-like crew — hiking in the mountains to find specific spots that have never been seen in a movie before. I asked for that flexibility, which was really rewarding. It was a non-stop shoot, but it was so fun.” 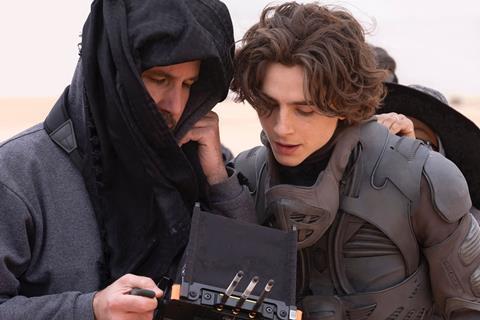 Denis Villeneuve pictured on the ‘Dune’ set with Timothée Chalamet

Filming in the heat and dust of a real desert, as opposed to conjuring virtual environments, was fundamental to Villeneuve’s aesthetic approach. “When we talk about natural environments, there’s something about the chaos of life that can create something new or bring inspiration,” he explains. “When I work with virtual environments, I feel there’s a tendency to go back to things I’ve seen before, or references that are limited by my knowledge. But when you’re in life, there are surprises. It’s the same when you’re on a real set with actors. Sometimes it will spark an idea that will never happen in a virtual environment. I love it when I’m destabilised by an actor having an idea that’s better than what I envisioned when I storyboarded or wrote it. I call it the beauty of chaos. You want to capture life. I have difficulty doing that with a green screen.”

Villeneuve’s insistence on capturing as much as possible in large-format camera while realising his visions on an epic scale has drawn obvious comparisons to Christopher Nolan, the director behind Tenet, Inception and Dunkirk — comparisons the director confesses makes him feel “embarrassed”. Nolan is, Villeneuve says, “an exceptional filmmaker. One of the best working today. What he can do with a camera, the complexity of his projects, it’s really impressive. I would not dare to compare myself to someone I consider a master. I have massive respect for his work, and what we have in common is a massive love for the theatrical experience.”

There was an element of being careful what you wish for during the mammoth endeavour of the Dune shoot. It was, Villeneuve says, his most gruelling production yet — by far. “In my experience, there’s always two or three massive sequences on a movie that will be the things to tame or master. But on Dune there was something like that every day. I had to adapt to survive. With all the technical complexity, it was taxing. We got very tired. And it was intense to work in that environment. When you’re looking at the camera crew putting ice on the cameras, you think, ‘Whoops, that’s not a good sign.’ But nobody complained. They all knew what they were getting into.”

Yet Dune remains a challenge that is only half-met. The opening titles announce the film as “Part One”, and Villeneuve’s screenplay, co-written with Jon Spaihts and Eric Roth (an Oscar winner for Forrest Gump), ends roughly at the novel’s midpoint, when the exiled Paul and his pregnant mother join the Fremen.

This was a huge gamble. Similar to 2017’s It, another Warner Bros production based on half a girthy novel, the greenlighting of Dune: Part Two was dependent on the first film’s box-office performance. Villeneuve laughs at the thought there are ornithopter flying machines under canvas and racks of Fremen costumes hidden away somewhere in the world: “A whole warehouse full of Dune stuff that’s waiting [to get] back into the light and see the front of a camera.”

It was not until after the film’s $41m domestic opening (the biggest yet for Villeneuve, despite the film releasing day-and-date with HBO Max) that Warner Bros confirmed Dune: Part Two would go ahead, with an October 2023 release. But Villeneuve insists he was always optimistic about its chances. “Even before we started to release the movie, I knew Warner Bros and Legendary loved the film and are very proud of it,” he says.

He is so confident, he can even foresee the possibility of a third Dune movie, based on Herbert’s second novel in the series, Dune Messiah, set 12 years after the events of the original. “I think Dune Messiah would be a beautiful film,” Villeneuve says. “And it would complete Paul Atreides’ journey. But I’m going one movie at a time. It’s so difficult, and I’m a bit lazy! But I think three movies is a possibility.” Any such outcome would, surely, be beyond the fondest hopes of his 17-year-old self.