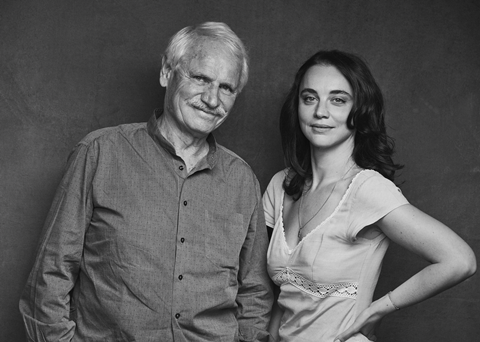 Renowned French photographer Yann Arthus-Bertrand and filmmaker Anastasia Mikova were at the Venice Film Festival earlier this week for the Out of Competition premiere of their ambitious, wide-scale documentary Woman.

Ukrainian-born Mikova first worked with Arthus-Bertrand as editor in chief on his 2006 series of documentaries Earth From Above and was then an assistant director on his 2015 film Human, conducting some 600 of its interviews.

She takes a co-director credit on Woman, having led the predominantly female team as they interviewed some 2,000 women in more than 50 countries over three years.

The resulting documentary – produced by Arthus-Bertrand’s Hope Production - gives voice to 100 women from all walks of life on topics ranging from what it means to be a woman, to motherhood, marriage, education and darker subjects such as sexual violence and genital mutilation.

Can you talk a little bit about the genesis of the project?

Mikova: “It started with Human. While we were filming, it struck us that there was something special about the women’s voices.

We’d go to remote places where they’d never seen a camera. The men would be eager to share their stories while the women were often initially suspicious of our presence. But once they were in front of the camera they would totally open up. It seemed like it was the moment they had been waiting for all their lives.

We felt these women were ready to talk and wanted to be heard. The project started two years before the Weinstein Affair and the creation of movements like MeToo. That’s not to say we were first but rather that we weren’t surprised when this all happened…we really felt it was in the air.

What do you think sparked this mood?

Mikova: Social media has played a big role. In some of the remote places we visited, they might not have had basic facilities, but they all had phones and internet. Many women now know that a different type of life is possible and want to break the silence, for themselves and future generations.

Some of the testimonies revolve around harrowing experiences did you have counsellors on hand for the participants?

Mikova: We didn’t just pitch up and start doing interviews. We did a lot of advance preparation. The involvement of NGOs on the ground was key to the success of the project. They understood the terrain and often already had the trust of the women, and knew which women were ready to talk. We really didn’t want to push people if they weren’t ready.

Yann, what role did you play in the making of the film?

Arthus-Bertrand: I quickly felt there was a complicity between the women on the team that I could not be part of, because I was a man. I felt I didn’t really have the right to speak, and even when I made suggestions that I thought were valid, they ended up being a bit off target.

There were topics, like what it means to have periods, to bleed every month and feel ill, that were completely alien to me as a man. I understood I should stay in my place. I didn’t feel I had the right to impose my vision. It’s the first time that has ever happened to me. I someone who normally likes to take the lead.

The documentary premieres at the Venice Film Festival amid ongoing criticism of the lack of female representation in its line-up. What are your thoughts on this?

Mikova: It’s good to have the film playing here amid all this controversy, to have all these women talking and releasing their message.

Arthus-Bertrand: These sorts of films can have a hard time getting exposure in cinemas, so to launch it here is a wonderful opportunity.

What next for the film after its Venice premiere?

Mikova: We only have 100 women speaking in the film but we want all the women’s testimonies to exist in some way. We’re finishing a book, there will be a social media campaign on Facebook and Instagram, and we also want to create an exhibition.

Arthus-Bertrand: We hope to organise a simultaneous worldwide release for the 8th March, 2020, to mark International Women’s Day.

In addition, we have also created an association, called Woman (s), aimed at offering media and filmmaking training to women. We already have projects up and running in Brazil, South Africa, India, China and Lebanon. All the money made by the film will go into this association. As the film has been made with sponsorship money we don’t have to pay back costs and producers fees.

We’re also looking at a second film going deeper into the some of the issues tackled by the first film.

Are you working on other projects?

Arthus-Bertrand: Me personally, I’m working a new film called Legacy, subtitled the “Courage of the truth” looking at the environment and what is happening in the world right now. With Anastasia, we’re also mulling a project looking uniquely at men, following on from Woman.

Mikova: When we were editing the film, we’d ask ourselves what would a man have said. What would he say about his sexuality, his relationship with his mother. Men have talked a lot through the centuries but very often it’s in public.  I’m wondering what would men would say on more intimate topics, would they be prepared and able to reveal these things. It’s a question.