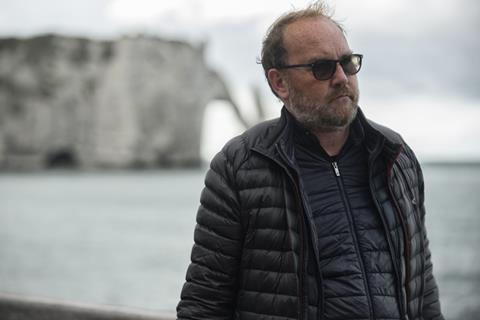 Award-winning French director Xavier Beauvois’s international profile has been boosted this year by his cameo appearance in the last season of hit Netflix show Call My Agent! about the byzantine world of Parisian talent agents.

He chuckles at the suggestion he might be better known on the worldwide stage for that role rather than all his well-travelled, award-winning films including Of Gods And Men, The Price of Fame and The Guardians.

After trips to Cannes and Venice with previous films, Beauvois made his Berlinale debut with drama Drift Away, which played in the Competition last week. It premiered online to industry and select press and in person for the jury in socially-distanced screenings at the Berlinale Palast.

Like all the directors with films in the Berlinale this year, he participated virtually, fielding press events and interviews from the comfort of his 19th-century farmhouse in the Normandy countryside of the Pays de Caux region, overlooking the English Channel.

It is this same landscape that acts as the backdrop for Drift Away. After shoots in Morocco for Of Gods And Men and the south-central French region of Limousin for The Guardians, Beauvois stayed at home for his latest feature.

“It’s very comfortable to shoot where you live. You don’t have to go back to a hotel in the evening. I can tend to my animals. It also made sense for my daughter. When we shot The Guardians, she had to change schools. This time she could stay in school and I even shot a scene with her class,” he says.

“I’m not saying I don’t want to shoot elsewhere in the future but shooting at home from time to time is great.”

Steeped in the farming and seafaring cultures of his home town of Étretat, Drift Away stars Jéremie Renier as a rural policeman and amateur yachtsman who shoots a desperate dairy farmer and friend in the leg in an attempt to stop him from committing suicide. He catches the femoral artery in a fatal mistake.  His career in tatters and life in a tailspin, he borrows a friend’s boat and sails off into the Atlantic with the aim of reaching the Canadian province of Newfoundland.

Inspiration for the film came from an article in the French magazine Society about a burnt-out farmer who was shot dead after deliberately driving into a group of police officers.

“I was shaken by this story because living in the countryside I know a lot of farmers,” explains Beauvois. ”There are 3,000 farms for sale in France and they won’t ever sell. Youngsters don’t want to take on the family farms, and especially not cows. That’s hell, no weekends or holidays. It takes 40 cents to produce a litre of milk, the supermarkets buy it for 45 cents and then they sell it for double that. It’s a racket,” he says. “I also know the local policemen quite well. It got me thinking about what would happen if a policeman kills someone as he tries to save their life,” he continues.

The drama also taps into Beauvois’s passion for the sea. “From the kitchen, I see the sea, from the living room I see cows. I’m in the middle of both worlds,” he says.

He also drew inspiration from late round-the-world yachtsman Bernard Moitessier. The sailor gained international notoriety in the late 1960s when he took part in the Golden Globe Race, the first-ever single-handed, round-the-world race. He abandoned the course even though he was in the lead, in a rejection of the commercial nature of the competition and headed off for Tahiti instead. Other competitors included Donald Crowhurst.

The filmmaker tapped into Moitessier’s literary works, inspired by his observations of life at sea, during his long stretches away from dry land.

“He would go on to spend 300 days at sea. He describes it like no-one else, its beauty, the birds. There was more space in the film for that, for contemplation and hours of pure observation, but I had to cut it because it would have been too long.”

The yachting scenes were shot in the Atlantic off the Ile d’Yeu, off the Vendée coast of western France, rather than close to the coastline of the Pays de Caux.

“The swell is different in the English Channel from the Atlantic. Experts would have understood it was shot in a different sea,” Beauvois explains.

All the shooting was completed before the pandemic struck France last March. Beauvois would spend the 14-week lockdown editing the film at home with his wife, who cut all his previous works.

The film’s French title of Albatros as well as the long physical and psychological journey of Renier’s character, has led some reviewers to wonder if the film was also inspired by Coleridge’s poem The Rime Of The Ancient Mariner. But Beauvois says not. “I don’t know the poem at all. It was only on reading all the reviews that I discovered its existence. That’s troubling, I know. There was even one article that described the film as an adaptation of the poem. I was asking myself what’s going on here,” he says.

For Beauvois, the drama is rather his attempt to capture the “state of affairs” in France at a complex time in its modern history. Beauvois, who has a dim view of big business, French president François Macron and the European Union in its present form, sees it as a period characterised by growing precarity for ordinary people, from farmers to students, that has deepened with the pandemic.

“This is my attempt to capture what is happening now and gendarmes are on the frontline of that. There is real desperation. We have a catastrophic government. It feels like we’re in the middle of a storm with a captain at the helm who isn’t a captain,” he says.

He points to recent developments such as students queuing up for food handouts because they can no longer get part-time jobs or the rising number of suicides in his home town of Étretat. “The shockwave of the unemployment that is going to hit will also be terrible. The suicide rate here in Etretat gives you an idea of what is going on in France. Normally, there are two a week and [recently] there were five in one week and three in one day. It’s never happened before.”