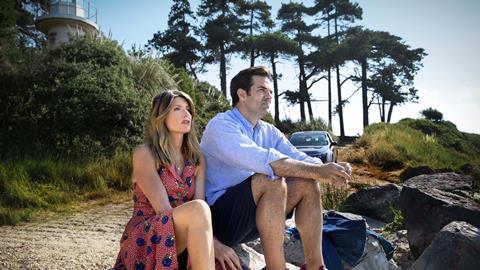 The fourth season of twice-Emmy nominated Channel 4 comedy Catastrophe, which is produced by Avalon Television and Merman and also streams on Amazon Prime Video, saw the relationship of central characters Rob and Sharon — who were first thrust together back in 2015 when American Rob accidentally got Sharon pregnant during a week-long business trip — pushed to its limits as they faced Rob’s recovery from alcoholism and the sudden death of Rob’s mother Mia (played by the late Carrie Fisher). Writer-stars Sharon Horgan and Rob Delaney discuss the careful planning that went into bringing the series to a satisfying resolution.

Did you know this would be the final season of Catastrophe when you started writing it?

Rob Delaney: We knew after the third season that the fourth season would be the final one. We figured out a good way to end it, and we didn’t want to overstay our welcome. We wanted to have every season be very good; we didn’t want to taper off and do a crap one.

Sharon Horgan: It’s really hard, as it turns out, to end a series of anything that doesn’t have a multi-season plan with a thriller aspect to it. How do you do it? You’ve got to emotionally thwack people round the head. We decided it felt like a very fitting idea for their story to be able to continue beyond that final moment. Not ending on a laugh is a strange thing for us, really, but we felt like [the characters] earned that moment.

The final season deals with serious themes — alcoholism, grief — while also being comedic. Was it tricky to balance the light and dark?

Delaney: It’s critical you get that relationship right. You need to have a good variety of ingredients, and you need to sequence the courses properly.

Horgan: Even if we’re writing an episode that moves us in some way, we would read it back and decide there was plenty of room for more jokes. We’re both very good at checking each other, and making sure we don’t get too indulgent. And making sure we remember that we promised people a comedy and that’s what they’re going to get, even at the worst moments. It was so handy having Rob’s yellow dad [Rob’s leukaemia-stricken, estranged father, played by Mitchell Mullen] for the final episode. We knew that him turning up at a funeral would get a laugh. As would the fact that even though it’s Rob’s mother’s funeral, Sharon’s well-earned family holiday is being messed with, and her selfishness would bring out the funny.

Catastrophe’s comedy comes from real-life truths. That was particularly highlighted in episode five, where both Rob and Sharon had to deal with gender discrimination at work.

Horgan: The fun thing for me in that episode is that, almost throughout, Sharon’s character is the one who’s dealing with it in the best way. Rob is not really engaging with her story [Sharon believes her new boss is behaving inappropriately towards her]. He’s like, “What are you going to do about it?” And she says, “Be angry? Nothing?” He’s like, “Good choices.” And he’s genuinely treating [his co-worker] Harita [played by Seeta Indrani] quite dismissively, and Sharon calls him out on it. She’s the moral voice. Then, when Rob does make what seems to be the right decision, she turns around and takes it from him for practical reasons. The shift at the end was the thing I enjoyed the most. It was the scarier thing to do, because you don’t want people to think your character is a massive asshole. But taking that risk is, I think, what makes the show relatable.

You’ve worked with just two directors, Ben Taylor and Jim O’Hanlon, since the show began. Did you let them get on with it on set?

Horgan: They are both smart, funny and ambitious but it’s very hard to not [get involved]. It was always collaborative. Because Rob and I are involved throughout prep, when it comes to casting, locations, costume, design and all of that, we’re all over it. Once we’re on set, there’s not a huge amount of time to do anything other than muscle your way through it.

Was there any improvisation when shooting, or did it stay true to script?

Delaney: We’re not really an improvising set, which is not a good or a bad thing — it’s just a function of the amount of time we have to shoot. David Mamet would see the way that we make our actors read dialogue and be like, “Jeez, relax guys!”

Horgan: When we’re writing it, it always begins in conversation. Then once we get that down, we read through it and if it doesn’t sound like real, proper conversation then we keep fucking around with it until it does. We work very hard to make it sound like genuine talking, and not like lines. We love when things sound slightly off. It helps with the reality of it.

How did the show evolve as you got to know each other better?

Delaney: I feel like the biggest evolution in the show was that we got to a point where we were unafraid to have an episode that combined something sad or pathetic with something silly and wacky. We became confident that those things could work together. The first series of Catastrophe could have been a play, it was about head-to-head dialogue. By the end, we started to revel in the larger outdoor set-pieces that could only be on television or in a movie. In the beginning, if you’d asked me, I’d have said, “We don’t need to do that. It’s about the words and the feelings…”

Horgan: Even in the second series, it was all about the language and keeping these conversations running. And as we went on, we were noticing there was none of that stuff in the episode, or even in the season. I guess that’s the evolution of it — realising that, tonally, you can mix it up.

Now the show is over, would you like to do more?

Delaney: I think of the show extremely fondly and I miss doing it. That said, you could look at the four seasons and you would know how I feel about marriage, how I feel about parenting. So I would personally fear that I would be repeating myself and I don’t want to do that.

Horgan: There was the odd moment here and there where we’d come up with something and we’d be like, “Oh no, shit, we did that in season two.” There was enough of those to be a little bit worrying. I feel like where we go to at the end with Sharon and Rob, where we took them and what we did to them, is very satisfying. It felt like we’d done our job.