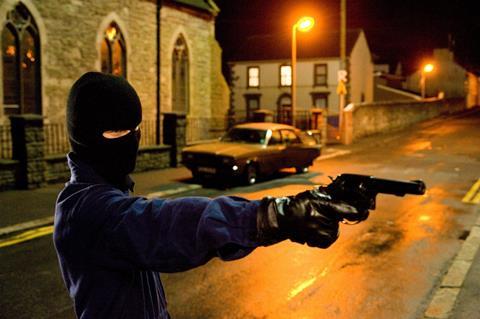 Thank goodness Oliver Hirschbiegl is back in Europe. After an unpleasant venture into Hollywood with The Invasion, the brilliant German director of Das Experiment and Downfall here takes on a script about truth and reconciliation in Northern Ireland and delivers a tightly structured, nerve-crunchingly tense drama which sees him back at the top of his game. Boasting two fine central performances from James Nesbitt and Liam Neeson, Five Minutes Of Heaven is one of those rare films which is both riveting and important, and it warrants widespread distribution around the world.

Rather like Bloody Sunday, which had its world premiere at Sundance in 2002, and went on to international sales, critical acclaim, a Golden Bear and a stellar career for director Paul Greengrass, Five Minutes Of Heaven follows up its Sundance world premiere with a UK TV screening on the BBC in April. This shouldn’t hamper international or domestic theatrical sales prospects for Pathe, which can expect further festival play and even awards prospects at the end of the year.

A fictional 90-minute two-hander based on two real-life men still struggling with the legacy of a paramilitary killing by the Ulster Volunteer Force (UVF) in 1975, the film is a thought-provoking study of the problems facing all countries dealing with the human fallout of violent civil strife, from South Africa to the former Yugoslavia, and even Spain. The combination of an outstanding script by Guy Hibbert (Omagh) and such a viscerally exciting film-maker as Hirschbiegl lifts Five Minutes Of Heaven from being a potentially earnest TV-style exercise to a powerful cinematic experience. It also shows that in just 90 minutes, a disciplined film can be both thematically epic and emotionally satisfying.

The intense, detailed prologue - which is a recreation of real events - depicts the killing in question. Alistair Little is a 17-year-old Protestant committed to the UVF cause who one night sets out to kill a Catholic man at his house. He shoots him in the head three times, before realising that the man’s young brother, Joe Griffin, is standing next to him witnessing the murder.

The fictional drama begins 33 years later when Little (Neeson) and Griffin (Nesbitt) are separately driving to a country house where a TV crew will film their first-ever meeting.

Little, who served 12 years’ in jail for the killing, has become a spokesman for conflict resolution but is still racked by guilt at the devastation he wrought on the Griffin family. Griffin is married with two daughters but has never been able to overcome the aftermath of that night, and sees the TV meeting as a chance for him to kill Little and finally have his revenge - his ‘five minutes of heaven.’

The plot twists and turns further still before the two men finally come face to face (77 minutes in) in an explosive confrontation which defies expectations. Hibbert’s - and Hirschbiegl’s - skill in the denouement is in avoiding sentiment and ready forgiveness. The men are so raw and entrenched that no Hollywood-style kiss-and-make-up session is ever on the cards, even though the final moments are desperately moving.

Sometimes the most intriguing perspectives on specific countries are told by foreigners - Ang Lee and Brokeback Mountain, for example, or Danny Boyle and Slumdog Millionaire - and Hirschbiegl’s expert handling of this story suggest that he was the best man for this job. He is served superbly by his actors. Neeson uses his brooding presence to great effect as the broken Little and Nesbitt is a powderkeg of roiling emotions as Griffin. It’s also nice to see Romania’s Anamaria Marinca (Four Months, Three Weeks ) as a runner on the TV crew who befriends Joe.