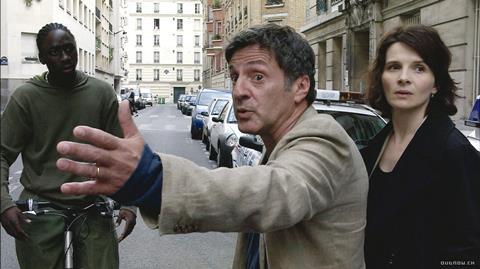 So, who made the tapes? Does it matter? How long can you escape the grip of a guilty conscience? Does no bad deed go unseen or unpunished?

A master at controlling mood and emotion, Haneke shows such precision in his pacing and imagery that the audience is in the palm of his hand

Those are just some of the questions that audiences are left to ponder by the new Michael Haneke film. The fact that Hidden refuses to reveal all of its secrets means that they are likely to remain engaged and intrigued by it long after the final credits have rolled. Following the sensationalistic subject matter of The Piano Teacher and the murky obscurity of The Time Of The Wolf, this is Haneke close to his best with the kind of intense, unsettling reflection on guilt, trust and paranoia that should play to the top of his arthouse potential.

In certain European territories (France and Austria at least), the combination of Haneke, the stars and the film should also achieve mainstream success although this may be curtailed by its essentially enigmatic nature.

Modern technology has allowed the possibility for more closely scrutinized lives than ever before, an issue that has fascinated Haneke since the days of Benny’s Video (1992). He returns to it in Hidden as television presenter Georges (Auteuil) and his wife Anne (Binoche) receive a package with a video tape that contains covertly filmed images of their home and the street where the live. The audience is implicit in the gaze of the video camera and Haneke lingers on this quiet city street with such an intensity that your imagination begins to take over and suggest all kinds of unhealthy possibilities.

Could it be the act of an unbalanced fan? A schoolboy prank by their 12 year-old son Pierrot (Makedonsky)? A sense of menace is palpable within the first few minutes and all Haneke has asked is that the audience observe and think. He doesn’t lead in any particular direction.

The videos keep coming and become personal, including footage of the house where Georges grew up. They come wrapped in drawings of a chicken’s head sprayed with blood. Postcards are delivered with the same images. Anonymous telephone calls are received. There is no real crime, just an intent to unsettle, and so the police are not interested in pursuing the matter. Georges feels he cannot let it go and we begin to realise it has some connection to anincident in his childhood.

On one level Hidden operates as a detective story with Georges determined to get to the truth of the matter and convinced that all his assumptions are leading him on the right path. On a much more interesting level, it lays bare the soul of this particular family unit and how they all react to the pressures put upon them. Georges becomes short-tempered and secretive, keeping his thoughts to himself.

Anne begins to see a different side to the husband she thought she knew. Pierrot suspects his mother of some kind of infidelity. Their suspicions are often encouraged by different video tapes revealing new information to them that has been concealed by someone they trusted. Rock solid performances by all the actors keep the focus on the family and Auteuil might even be a Festival Best Actor contender for his portrayal of a man whose anger and righteousness seems to cast aside any self doubt or moral quandaries. There becomes something blinkered and monstrous about his refusal to see the other possibilities in his story.

A visit to Georges’s mother (Girardot) and his former boyhood friend Majid (Benichou) convince Georges that he knows exactly what is happening and brief glimpses of the past allow the audience a sense of the events that seem to have returned to haunt him. A master at controlling mood and emotion, Haneke shows such precision in his pacing and imagery that the audience is in the palm of his hand. One moment in the latter stages of the narrative is so sudden and shocking that is takes the breathe away with a force that no scary movie could hope to match.

Some audiences may be frustrated by Haneke’s refusal to offer a complete explanation for what has just happened but that could only disappoint. The point is what it has done to the people concerned. Can Georges simply take a couple of sleeping pills and wake up feeling better? Will Anne look very differently at the man sitting across the dinner table from her? Is the covert surveillance continuing? Questions to be discussed in the hours and days after the film has been seen. Questions that should stimulate strong word of mouth.