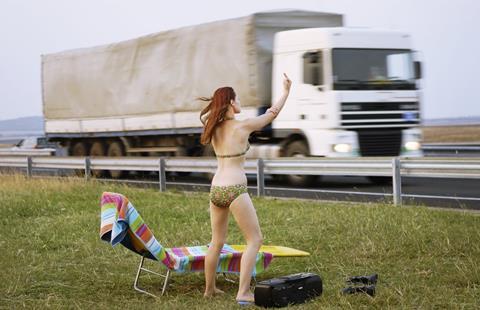 An ambitious first film, Home starts out with one interesting idea but never quite manages to find another to back it up. Ursula Meier and her four co-screenwriters have come up with the story of a family living in an isolated house, next to a disused highway. It’s a blissful idyll at first, until the road is re-opened for traffic and cars rush up and down at top speed, destroying their world.

Meier drags this family brutally from their illusions of having rejected the world to a reluctant acceptance of the inevitable.

Home switches moods throughout, seeming at one point to be veering towards a Haneke-style cataclysm before it drops away. The presence of Isabelle Huppert and Olivier Gourmet should generate some interest in Gallic markets, but its shaky dramatic construction and hesitance to flesh out the plot may see it stall elsewhere.

Meier attempts to take the family from a state of total contentment through stages of worry, annoyance, despair and complete despondency. Alternating between light comedy, social satire, black humour, melodrama and even horror, she seems more interested in dabbling with different genres than the characters she has onscreen.

Father Michel (Gourmet) is a sunny-natured character and he tries to protect his home as best he can, attempting to insulate it against the fumes, noise and dangers incurred by having a highway on the front doorstep. His wife Marthe (Huppert) is composed, tolerant and self-confident, and although she is defeated by her new living conditions, she refuses to move away from the family home and start afresh somewhere else.

Oldest daughter Judith (Leroux) just suns herself in the yard, giving the finger to all the honking drivers who express their appreciation of her bikinied charms. Her sister Marion (Budd), all quivering adolescent fears, thinks the pollution will kill them all, while the youngest, Julien (Klein), would prefer to see it all as an adventure but can’t help being affected by the anxiety around him.

Meier drags this family brutally from their illusions of having rejected the world to a reluctant acceptance of the inevitable. Despite her many writing partners, the final result is rather thin and inconsistent and Home’s progress seems more determined by the author than a natural progression of events. Huppert is self-assured as a housewife whose home is her castle and will not be budged from it. Gourmet, on the other hand, seems slightly out of control at times, while Leroux, Budd and Mottet Klein have sketchier roles.

Technical credits are satisfactory, particularly in the sound department (an important part of the plot) and in the use of music which varies from Dvorak to Nina Simone to heavy metal.