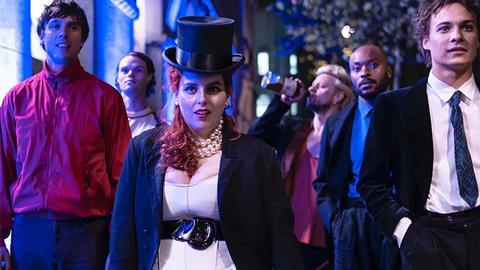 It’s a hot day in August 2018 in west London, but inside Bush Hall it’s 1993 again. There are props including a giant Walkman and big-haired extras wearing silk shirts and Lycra. Beanie Feldstein walks past in a tight black corset dress and an excessive top hat.

Caitlin Moran — columnist, novelist and now screenwriter — is on stage gushing like a fangirl between takes to Bob Mortimer, the British comedian who is playing the host of a music magazine awards show, in which our heroine Johanna (Feldstein) wins the coveted ‘asshole of the year’ prize.

The awards are evidently a big night for the fictional Johanna, and the shoot seems equally as exciting for Moran, working on her first film.

How To Build A Girl is adapted from Moran’s semi-autobiographical 2014 novel of the same name. It’s the coming-of-age story of Johanna, a smart, funny, overweight 16-year-old from a working-class family in Wolverhampton who moves to London to try to make it as a rock journalist, rechristening herself as Dolly Wilde.

Director Coky Giedroyc worked with producers Alison Owen and Debra Hayward on Hulu show Harlots, and jumped at the chance to direct How To Build A Girl: “It felt fresh and bold and provocative in the right way. This story hasn’t been done before,” she says.

She also responded to Moran’s irrepressible passion for Johanna’s journey. “Caitlin has always said it must be a fun, upbeat story. It’s not about a girl who has sex and then gets punished. This for once is not that story.”

Moran worked on the script alongside author/screenwriter John Niven with input from Giedroyc and the producers. Giedroyc recalls, “There’s as much heartbreak as hilarity and that was a big thing for us. I was leaning towards the emotional and Caitlinwas leaning toward the comedy.”

Moran, who found it an enjoyable learning curve writing a screenplay for the first time, wants the film to be a crowdpleaser. “I like the pantomime ethos,” she says. “Throw everything in it: put as many songs in as possible, as many amazing outfits. Have some moments for the old people, jokes for the young people. That’s the kind of entertainment I like.”

It helps to have a compellingly funny actress in every scene. Enter Feldstein, who first drew international attention as the sidekick in Lady Bird and more recently featured as the co-lead in Booksmart.

Owen watched Lady Bird at the Savannah Film Festival in October 2017, and called the team immediately to say, “I’ve found Johanna. She’s a 23-year-old Californian girl. You can learn an accent but you can’t learn star quality.”

Feldstein felt confident she could hone the accent… and the mindset. She spent a few weeks working in a Wolverhampton café to pick up the nuances. “You put her in front of a camera and you want to eat her with your eyes, she’s just luminous,” says Moran. “She’s just in every fucking scene and she nails it.”

Giedroyc adds that Feldstein was “the most well-behaved actress I’ve ever worked with. She arrived early on set every day, prepared”. And even amid an often boisterous set, “she and I had this very quiet communication throughout and could talk to each other very calmly.”

The cast also includes Alfie Allen as rock star John Kite, the object of Johanna’s affections; Paddy Considine and Sarah Solemani as her parents; and Emma Thompson as a magazine editor.

Owen and Hayward’s Monumental Pictures developed the film with Film4 (which co-finances with US-based Tango Entertainment); Lionsgate UK came on board as UK distributor at script stage. Financing also comes from the BFI’s locked box initiative, following Owen’s successful production of Suffragette. Protagonist Pictures handles international sales, and the film will have its world premiere in Toronto on Saturday September 7 in Special Presentations.

Other locations included music venue Koko in Camden, Fire in Vauxhall, the Willesden Working Men’s Club, exteriors in Wolverhampton and a set for the family home built at Shepperton Studios.

The project is a very special one for Monumental, as it was the first project Owen and Hayward optioned when they joined forces to launch the company in 2014. “It’s completely on target for everything Alison and I cared about,” says Hayward.

Owen adds: “This film encapsulates what we want to do with Monumental: it’s female-centric but not overly worthy. It’s not lecturing, it’s funny. It’s got something to say, it’s intelligent, but it’s also for audiences, there is commercial breakout potential.”