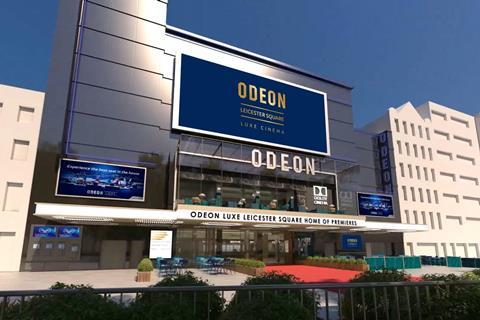 An artist’s impression of the new Odeon Leicester Square.

Three decades ago, US exhibition giant AMC revolutionised the then struggling UK cinema sector by opening The Point in Milton Keynes, a medium-sized ‘new’ town about 40 miles north-west of London. In the days when run-down high street venues had been justifiably nicknamed fleapits, this was a gleaming new 10 screen multiplex, the very first of its kind in the UK.

After AMC merged with CIC theatres to create UCI in 1989, AMC effectively withdrew from the UK.

Now it is back – and promising a second revolution. In the summer of 2016, the company (now owned by China’s Dalian Wanda) turned itself into the world’s biggest exhibitor by buying the Odeon and UCI cinema chains in a $1.2 billion deal. This was followed by its acquisition of the Nordic Cinema Group (which became a subsidiary of Odeon) in the spring of 2017.

In Europe, the Odeon group now has 360 cinemas in 14 countries and attracts over 100 million spectators each year. It represents about a third of AMC’s overall business.

The aim, says Carol Welch, managing director, Odeon UK & Ireland, is to transform multiplex cinema-going in Europe as AMC has helped to do in the US, replacing threadbare old chairs with recliner seats.

The exhibitor now has 24 European sites up and running of what it calls its ‘Luxe’ cinemas. Odeon is banking on the idea, in the Netflix age, that spectators (or “guests” as Welch calls them) are prepared to pay a premium for comfort and for perfect sound and vision in a communal environment.

“It’s not just about the content,” says Welch of the experience the chain is seeking to cultivate. “It’s about how you feel, the build-up of excitement when you go into somewhere like an Odeon Luxe. It’s about the service you receive, it’s about the food and beverage products that will make the evening about more than just watching a film.”

The investment in customer experience appears to be working. Earlier this year, when the financial press reported on a possible float of Odeon on the stock exchange, Reuters valued the company at between $2 and $4 billion.

This is why the chain’s flagship venue, Odeon Leicester Square (OLS) in central London, has been refurbished at such expense, including with both Dolby Atmos and Dolby Vision, the first UK cinema to have both. (There are currently 126 AMC Dolby cinemas in the US.) OLS is the lavish art deco cinema launched by Odeon’s founder, Birmingham businessman Oscar Deutsch, in 1937 on the site of the legendary Alhambra music hall. It officially reopened on December 21 with the UK release of Walt Disney’s Mary Poppins Returns.

“It was only right that when we came to think about refurbishing this building that we paid homage to some of the history and some of where it came from,” says Welch, who previously worked as global chief marketing officer, responsible for brand and innovation, for coffee chain Costa.

“We’ve taken that grandeur but we’ve combined it with the latest technology, the latest digital thinking so that guests can experience both the heritage but also forward-thinking cinematic history.” 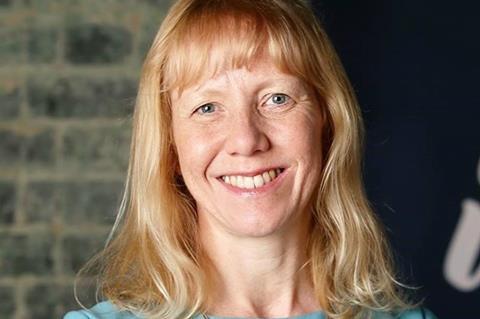 The refurbished site retains several of the original design elements including the old Compton Theatre Organ, which has been restored and an orchestra pit which allows for live music and events. The screen is hung on a framework that allows it to move backward and forward to make space for musicians if needed.

There is also a swanky new bar called Oscar’s and the stalls and Royal Circle offer handmade reclining seats. The famous Flying Ladies sculptures on the sides of the screen aren’t yet in place (one of the toes of one of the flying women was damaged during the restoration) but Welch says they will be back on the walls soon.

None of this comes cheap. Tickets cost from £10.75 for a Saturday night screening and go up to £40.75 for a seat in the Royal Box. The price point was criticised on social media and heavily covered in the UK press, with Odeon releasing a statement defending the charges earlier this month.

Welch added that the Royal Box has sold out for early screenings. “It shows that people appreciate it is something more than just a normal cinema seat and that it is an experience.”

Prices at other Luxe venues are lower. For example, to watch Aquaman with recliner seating at the Odeon Luxe Leigh Valley on the first Saturday evening of its run was £12.50; in Bridgend in Wales it was £11.75.

“We are an equivalent price, in fact slightly lower than our competitors,” claims Welch.

One big difference is capacity. In its early days, OLS had over 2,000 seats. More recently, it has had 1,600. However, the new ‘recliners’ take up space and guests receive two metres of leg room. The result is the main auditorium will now hold only 800, still the biggest cinema screen in London but a long way short of the sites such as the Royal Albert Hall which recently hosted the premiere of Mary Poppins Returns and can seat over 5,000. But short of premieres and gala screenings at events such as the BFI London Film Festival, the screen rarely ran at capacity.

“We are the biggest venue on the Square,” claims Welch. (The IMAX Cineworld, formerly the Empire, has 727 seats and 6 wheelchair spaces. The Cineworld IMAX screen, though, is still bigger than that of the Odeon.)

Further Odeon cinemas receiving the Luxe treatment include the Odeon Cinema in Wester Hailes in Edinburgh that was re-branded as an Odeon Luxe and fitted out with 800 reclining seats across its screens last year. New Odeons in Durham, Leeds and Islington (on the site of the old North London Royal Mail sorting office) are being given the Luxe treatment. Six new Dolby cinemas will be opening around the country within the next two years. New IMAX screens are also planned as are several new Odeon’s giant, digital so-called ‘iSense Screens’ that will offer 4k projection and Dolby Atmos 3D sound.

However, all this refurbishment and investment in new technology won’t mean very much unless there are decent films to play. Welch, who cites Steven Spielberg’s Schindler’s List as her favourite film and talks fondly of being taken by her father to see Saturday Night Fever, is optimistic admissions can remain robust and says she wants the chain to screen independent and arthouse titles. “We have fantastic relationships with our distributors whether they be big or small,” Welch claims.

She expects that the Virtual Print Fee (the charge levied by exhibitors on distributors to contribute toward the digitisation of venues) “will all have been completed” by the end of 2019 at the latest. This news that will be greeted by some of the smaller players with immense relief.

“You need to understand what guests want and then you need to deliver it with as much quality and experience as possible,” says Welch,

“Cinemagoing has almost gone full circle back to the golden age of cinema where you actually feel like it’s a real experience rather than just going and sitting on a very hard seat and watching a film and exiting again.”