How 'The Eagle Huntress' soared to the Oscar doc shortlist 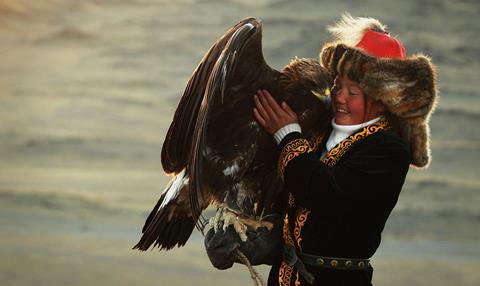 The tale of Mongolian teenager Aisholpan Nurgaiv’s quest to become the first female from her nomadic tribe to train an eagle as a hunting partner had its world premiere at Sundance in January and has played the international festival circuit throughout the year. Audiences have responded warmly to Bell’s juxtaposition of the breathtaking backdrop of Mongolia’s Altai mountains with colourful, intimate close-ups of family life.

Bell was a creative director at advertising agency Ogilvy Entertainment in New York, making branded and unbranded content for clients such as Philips and IBM, when he first saw images of Aisholpan online in a BBC photo essay by Russian photographer Asher Svidensky in April 2014.

“I’d been looking for a feature subject for a while,” says Bell, who was keen to follow in the footsteps of the award-winning feature documentary makers Anthony Wonke and Anthony Philipson, with whom he had worked at UK advertising and PR firm WPP.

Several Skype conversations later and Bell, accompanied by Svidensky, was drinking tea with Aisholpan and her family in their remote mountain yurt.

By chance, Bell’s visit coincided with a planned raid on a nearby eagle’s nest by Aisholpan’s father, Agalai, to procure his daughter an eaglet she could train from scratch. “I was floating the idea of making a film when the dad stands up and says he’s off to steal an eagle off the mountain. It became an essential scene of the first act,” says Bell. “A few days later and we’d have missed it. It’s rare in a documentary that you’re able to be there in person from the start of a story.”

Bell credits Agalai with playing a key role in enabling him to make the film, as well as in his daughter’s quest to become an eagle huntress.

“Going in, I thought I was making a girl empowerment film but it ended up being a film about a dad and his daughter, in a good way,” he says. “There’s still a female empowerment element in there but it’s more about a supportive family and a girl who is determined to see a dream through.”

Bell combined the shoot with his job at Ogilvy — visiting Mongolia two to three weeks at a time — and initially self-financed the project. But two-thirds of the way through, his funds ran dry.

Bell was desperate to return to Mongolia to film Aisholpan as she embarked on a challenge laid down by her tribe’s elders that she and her eagle brave winter on the mountains to achieve their first joint kill. “I had to get back,” says Bell. “I cut together a 10-minute film, with the material of the ‘steal’, and cheekily sent it to Morgan Spurlock, who was the biggest name I knew in documentary. He called me right back that day.”

The Super Size Me director told Bell he had never before seen footage like it and joined the project as executive producer. He immediately tapped into his network to support the film, financially and artistically.

“The clouds parted overnight,” says Bell. “I got plugged into this machine and everything got professionalised. He brought some law and order to my dog’s dinner of a production.”

Spurlock’s involvement also secured Daisy Ridley, best know for her role as Rey in Star Wars: The Force Awakens, to narrate the film. The actress, who shares an agent at CAA with Spurlock, has an executive producer credit.

“Morgan had got CAA to sell the film and someone at CAA showed it to Daisy,” Bell says. “She loved it. She called me on the eve of Sundance to ask how she could be involved. She told me how she’d called up her mum after watching it and cried down the phone.”

When Bell and Spurlock disagreed about the kind of music the film needed - “He wanted something commercial, poppy even, and I wanted something much more impressionistic,” says Bell - it resulted in an original song from Australian singer-songwriter Sia.

“We were arguing about [the music] when Morgan asked in exasperation, ‘Who do you want to do the music then?’ and I replied, ‘I want Sia,’ just to be belligerent,” Bell says. “Three weeks later, he called me into his office. I was wondering, ‘What have I done now?’ He sat me down and played me ‘Angel By The Wings’. He had gone to Sia’s manager and she wrote and recorded it just like that for us.”

Spurlock’s support was also timely because the final leg of the shoot was far more arduous than expected due to the freezing conditions. Bell had set aside five days to shoot the “final act”. It took 22 in the end.

“It got as low as minus-50,”he recalls of the inclement weather. “Our hands would stick to the metal of the tripod, batteries would die after five minutes and equipment froze. We figured if we waited for the sun to come up over the mountains, it would warm up to minus-20 and the equipment would come back to life again, giving us three hours of shooting.”

Bell praises the work of wildlife cinematographer Simon Niblett. “It looks like 30 people made it when there were only three people in the crew and that’s really down to Simon. He’s a pioneer in drone photography, one of the first to get a RED camera up in the air,” says Bell.

“In the 1990s, Simon had a terrible microlight accident filming birds but didn’t want to give up, so he started building drones. I was worried the drones would upset the eagles but they weren’t fazed at all. They’re massive, with eight-foot wingspans, and not scared of anything.”

Aside from his state-of-the-art drones, Niblett also brought a portable crane that could fold into a snowboard bag. “We’d look at the rushes every night and think, ‘We really do have something here,’” says Bell. “That and Aisholpan’s determination were the two things that kept us going. Watching her barrel through the snow, so incredibly strong and determined, made it difficult to complain about the cold. I felt if she was that determined to finish what she had set out to do, then I should at the very least finish my film.”

Celluloid Dreams is selling The Eagle Huntress internationally. Sony Pictures Classics released the film in North America in November with its gross pushing $2m to date. The film begins its international theatrical roll-out this week.