Unlikely alliances: how top festivals are teaming up to support films and cut costs 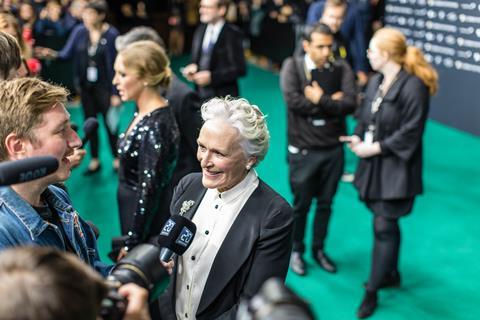 Glenn Close at the Zurich premiere of ‘The Wife’

Competition for top titles and talent has become even more fierce among the major film festivals amid the disruptive rise of Netflix and the industry’s growing obsession with awards season glory. But not all festivals are caught up in this increasingly complex battle for the most prestigious productions and stars.

Rather than keeping their guests and discoveries to themselves — and to share the large costs of flying directors and actors around the world — international festival teams are pooling intelligence, contacts and resources to better serve the independent films they champion, and to connect them with audiences.

Artistic director Tricia Tuttle says LFF informs these festivals on what it is programming and tries to date screenings “sympathetically” in order to co-ordinate travel arrangements, especially for talent coming over from the Far East or South Asia.

“We’ve even got a friendly relationship with Rome, whom we might [otherwise] be in competition with,” Tuttle says of the Italian festival that often overlaps with London. “I just talked to [artistic director] Antonio Monda on the phone the other day.

“We know how hard it is as a global business to get a film out. We respect local distributors’ needs to be able to screen a film and try to be as sympathetic to that as possible,” says Tuttle.

The London team note it is always open to new connections. Tegan Vevers, programme and filmmaker services manager at the BFI says: “This kind of working particularly helps us to secure some real in demand filmmakers as we can better ensure a smooth schedule for them.

“For example, last year we co-ordinated a European travel schedule for Takashi Miike (Blade Of The Immortal) and the directors of Good Manners with Sitges. We also worked with Vancouver International Film Festival in 2017 to arrange travel and split costs for the director of Bad Genius [Thailand’s Nattawut Poonpiriya],” she adds.

“Over the years we’ve been open to working with festivals taking place around the same time as us such as Hamburg and Reykjavik, co-ordinating screening dates and travel arrangements, but the relationship with San Sebastian has grown a lot deeper and substantial,” she explains.

After the 2012 co-operation, San Sebastian director Jose Luis Rebordinos and deputy artistic director Lucia Olaciregui asked the Zurich team for a face-to-face meeting during 2013’s Berlin International Film Festival. “Karl and I went along,” recalls Vezzani, referring to Zurich’s artistic director and co-founder Karl Spoerri. “Lucia and Jose are the nicest people on the planet and we immediately hit it off.

“As we shared stories, it was clear we had common goals and challenges. We all wanted to programme a great festival but sometimes had to compete with other festivals for big talent or films. We asked why we don’t share information, or talk earlier to figure out whether we can work together, either to save costs or to strategise to offer big films something unique.”

She suggests both teams have their particular strengths: “We have good ties with Hollywood and make more trips to LA, while San Sebastian is an older and more established event with strong links all over the world.”

The San Sebastian and Zurich teams now jointly programme around 20 titles a year, attend screening events together and liaise regularly on hot potential selections. They also run the San Sebastian Window, Zurich Window sidebars championing local cinema from each of their home territories.

Once a film has been jointly selected, the festivals work closely on the logistics. “Last year we brought over The Wife [together],” says Vezzani, referring to Bjorn Runge’s drama starring Glenn Close, Jonathan Pryce and Christian Slater. “It had a big cast and our teams were in daily contact over the logistics.”

Vezzani believes the connection has also helped to create a tried-and-tested Toronto-San Sebastian-Zurich circuit for some of the big autumn films not headed to Venice. “Once a producer or sales agent has tried out a festival route for a film and it works, they are likely to try it again,” she says.

Similar dynamics are at play between Glasgow and Dublin film festivals in a bond fostered by Glasgow’s co-director Allison Gardner and Dublin’s festival chief Grainne Humphreys.

Gardner reveals it is a relationship sealed over a glass of rosé during Cannes Film Festival, after years of bumping into one another on the festival circuit.

“Grainne has a huge amount of knowledge. She is absolutely fantastic. I would be asking, ‘What do you think about this? Do you think it would work? There is this great young filmmaker, how could we support them in the UK and Ireland?’” says Gardner. “Then with our dates coinciding, we started to discuss how we could work together, how we could share guests and what was the best way forward.” 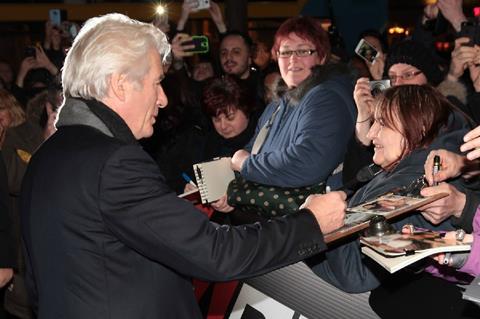 Richard Gere at Dublin Film Festival for ‘Time Out Of Mind’

Today, the two festivals “share intel” on potential selections and insights into audience reactions, host reciprocal screenings of upcoming filmmakers from both their territories and pool resources to bring over big-ticket guests, such as Richard Gere who attended both festivals in 2016 with Time Out Of Mind.

“We’re two festivals that are very small in terms of budget but big in terms of ambitions. We don’t have big budgets to spend on A-list guests and first-class fares. We thought, why don’t we just share the ‘Richard Geres’?” says Gardner.

The fact the festivals also have a Celtic bond is sometimes an added draw for international guests keen to visit Ireland and Scotland.

“We both have a nice feel for the Richard Gere-type guests. They think, ‘Brilliant!’” she says. “We’re both very friendly, intimate festivals in a way that Cannes is not. We have a breadth of programme but an intimacy, and guests really like that.”

Gardner also suggests the collaboration has been facilitated by the fact both she and Humphreys are women. “Women are much more co-operative. They don’t have an ‘it’s my artistic vision’ mentality. They’re much more into sharing,” she says.

Co-operation is the future

Her theory may hold some truth but plenty of male festival directors are also fostering ties with other events. International Film Festival Rotterdam (IFFR) director Bero Beyer believes co-operation between festivals is the way forward at a time when traditional distribution and exhibition models for independent cinema are under pressure.

The festival, which runs from January 23 to February 3 in 2019, does not have any official collaboration deals but has a historic “sisterhood” agreement with South Korea’s Busan International Film Festival in October and liaises routinely with other similarly timed European festivals, as well as Sundance, on screening dates and travel logistics for talent.

Rotterdam has also started collaborating with Sarajevo Film Festival as part of its IFFR Live initiative. IFFR organised a screening of Chris The Swiss in the Kino cinema in Rotterdam at the same time as Sarajevo. The Dutch audience was also able to participate in a Q&A with director Anja Kofmel via a live link.

“Competition for titles is natural and healthy, and as one of the bigger festivals we’re involved in that too, but festivals also need to collaborate to make the space bigger for the kinds of films that we represent,” says Beyer.

“Sundance, Berlinale, Karlovy Vary, Venice and Toronto — to a very large degree we’re actually fighting to enlarge the same space even if we have very different highlights.”