Film from Chilean filmmaker takes an unusual look at the life of Orélie-Antoine de Tounens. 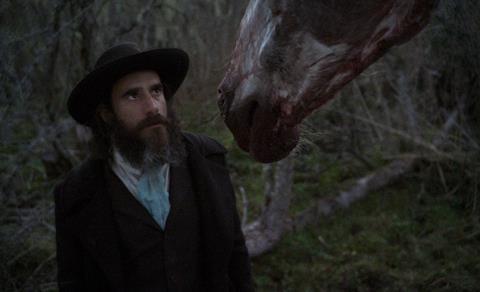 Rey is the second film from Niles Atallah, who lives and works in Santiago, Chile and holds duel US-Chilean citizenship.

The film, produced by Diluvio in Chile and Lucie Kalmar of Mômerade in France, tells the story of Orélie-Antoine de Tounens, an eccentric French explorer and lawyer who was proclaimed, or proclaimed himself “King of Araucanía and Patagonia” in the 19th century. There were coproduction partners in Germany (unafilm), the Netherlands (Circe Films) and Qatar (Doha Film Institute).

We spoke to the director ahead of the film’s screening at Rotterdam.

It was a natural progression from painting, photography and music. When I was studying Art and working in a variety of disciplines I found myself moving into territory that combined sound design and image work on a more narrative level.  I realized then that I was trying to make films.

What was your inspiration for making Rey?

The trigger was the story of Orélie-Antoine de Tounens and how he came to be known as the King of Araucania and Patagonia. But the main source of inspiration really came from everything we don´t know about him, the holes in the historical record. This fascinated me and opened many doors. Instead of simply encountering “what happened” I found contradictions and assumptions, theories that were presented as facts. I found that the elements of history themselves are volatile and changing. They are in constant movement and our conclusions are built upon this decaying edifice of relics. I´ve tried to make a film that provokes an analogous experience for the audience.

Yes, the script was developed over years and participated in the Binger Writer’s Lab, Torino Filmlab Script and Pitch and Framework.

Rey is like a monster, a Frankenstein of bits and pieces of collected and treated materials. Some of them buried and unearthed, some filmed on various formats over and over again, there is layer upon layer of image and sound, as well as narrative layers. My previous feature film Lucía was the opposite, an exploration in austerity and latent energies that never manifested to the surface. But they are two sides to the same coin, both are portraits.

Maybe it was just keeping my sanity, staying on track over seven years of intensive work. I´ve never spent so long working on one single project and it took over a lot of my life. All in all it was a wonderful experience but also very hard, gruelling in many ways and it consumed so much of my energy. I had many ups and downs but it seems I´ve made it through. Thanks to my family and those who’ve supported the project. It would have been impossible without them.

I´m preparing an installation that draws from the process of creating Rey, mainly the burials and un-earthings of celluloid.  I´m also working on another film, the tentative title is Lazarus. We’ll see what happens, there’s no script for the moment, I´m creating the film as I shoot and edit, scene by scene.