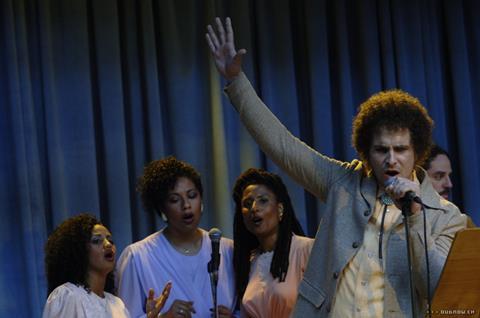 Baffling and intriguing in equal measure, Todd Haynes’ conceptual Dylan biopic must be one of the most star-studded experimental movies ever made. Haynes’ sense that the elusive musical icon can never be pinned down in conventional biographical terms has led him and co-writer Oren Moverman to split Dylan into seven characters, played by six different actors, which represent some of the personas that, in Haynes’ view, Dylan has adopted through his long career. The result is a challenging, fragmented film of superimposed and overlapping narrative layers that, rather like its subject, refuses to give easy answers.

Eschewing the dramatic arc and easy resolutions of the three-act feature, I’m Not There feels more like a thoughtful, probing, documentary told in fictional format. But this is also the film’s major drawback: it keeps teasing us with what Dylan actually did, or said, or sang, and then retreating back into its fictional shell.

However fascinating it is to see Cate Blanchett, or Heath Ledger, or Christian Bale do their takes on Dylan (and in the case of Blanchett, who plays the singer in his androgynous, electrified phase, around the time of Highway 61 Revisited and Blonde on Blonde, the transformation really is mesmeric), there are times when we yearn for the real thing, or at least the audiovisual illusion of the real thing - as provided in Martin’s Scorsese’s recent Dylan-doc No Direction Home.

The gulf between cast weight and commercial prospects explains Miramax’s decision to open in the US with an extremely limited three-screen release and then let out the box-office slack gradually. Though other territories are unlikely to adopt quite such a radical squeeze at roll-out, caution looks to be the operative word, with the arthouse crowd - especially the large segment that grew up with Dylan’s music - being the obvious target. With its frequent overlayering of music, dialogue and voice-over, the film will be a test for dubbers, and distributors in the dubbing-bloc may well decide to opt for subtitles.

The seven different incarnations of the Dylan godhead are presented in stories which run in only approximately chronological order, with plenty of overlapping and inter-cutting. We first meet Dylan in the guise of Woody (Marcus Carl Franklin), an eleven-year-old black kid who jive-talks beyond his years and hops boxcars, guitar in hand, in imitation of his hero, Woody Guthrie.

Next up is Arthur - as in Rimbaud - a poet (played by Ben Whishaw - perhaps the closest of all to Dylan himself in manner, if not in appearance) who gives elliptical, playful answers to blunt questions from a McCarthy-like commission about his supposedly subversive works. The Dylan with most screen time, by a short whisker, is Robbie (Heath Ledger), an actor who seems like a meld of Dylan and a young Marlon Brando, and whose passage from youthful idealism to embitterment istraced through his relationship with Claire (Charlotte Gainsbourg), a Frenchwoman in New York, who Robbie woos, marries, has two kids with, and finally divorces.

Most compelling of all Haynes’ Dylans, Cate Blanchett plays Jude, a mid-1960s former folk singer who is being pilloried by media and fans for going amplified and abandoning the protest songs of his recent past. Christian Bale takes on not one but two facets of Dylan: the first, glimpsed only briefly (mostly through interviews with his lover and singing partner Alice (Julianne Moore)) is Jack, a protest music singer enmeshed in the folk scene of Greenwich Village in the early 1960s; the other is Pastor John, who represents the musician’s ‘born again’ Christian phase of the late seventies and early eighties.

Finally, the most symbolic Bob of all is Billy (Richard Gere) - an older Billy the Kid, who has survived his shoot-out with Pat Garrett and gone to live in the sleepy rural town of Riddle in Shadow Valley - a retro late-nineteenth-century Western location threatened anachronistically by late-twentieth-century life (there are plans to put a six-lane highway through it).

Sounds confusing’ It is, much of the time. Haynes’ own advice at the Venice film festival press conference is that you should ‘let the film wash over you like a dream’. That’s disingenuous though: few viewers will come to I’m Not There (the title of a little-known Dylan song) with no knowledge of the subject, and the film is at its most illuminating, paradoxically, when it’s at its least dreamlike - for example in the scenes relating to the traumatic British tour of 1966, where Blanchett speaks lines from actual interviews given at the time, and with her startling performance pinpoints the wounded pride, the rejection of media pigeon-holes, the fragility of Dylan at one of the most productive and inspired moments of his career.

Ed Lachman’s photography is as protean as his subject, mixing distressed film stock, high-contrast black and white (in the Arthur scenes), lush, autumnal widescreen landscapes (in the Billy scenes) and the occasional homage to Beat-style directors of then sixties like Richard Lester or D. A. Pennebaker. Other parodic moments involve mock-up album covers and TV-style interviews with associates of one or more of Bob’s avatars.

But in the end, two things almost justify I’m Not There’s overlong running time, at least for cinema and music buffs. The first is the fascination that lies in comparing and contrasting six fine actors’ takes on Dylan. The second is the music. The selection of songs used here - some of them in new versions by contemporary artists - is by no means a Greatest Hits selection (there’s no Blowing in the Wind, no Like a Rolling Stone). But this seems a good choice, as ‘minor’ classics - like the poignant Bootleg Series version of Moonshiner — distract less than the iconic tracks from their function, which is to illuminate, or occasionally comment ironically on, the words and poses that fill Haynes’ ambitious, unresolved search for Dylan.