Writer-director Anthony Wilcox’s London-set debut feature Hello Carter is a comedy adapted from his buzz short of the same name. 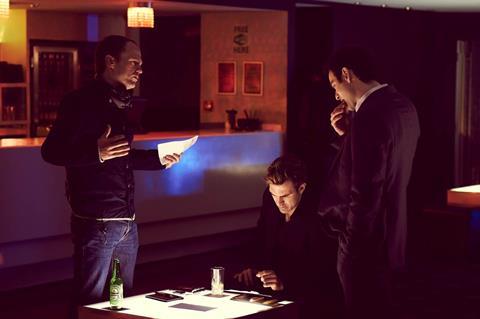 AD Wilcox, whose credits as AD include The Deep Blue Sea, Bright Star, Hot Fuzz and The End Of The Affair, corralled an impressive team including acclaimed cinematographer Andrew Dunn and actors Charlie Cox, Paul Schneider and Jodie Whittaker.

The film charts a man’s attempt to win back his ex-girlfriend in a 24-hour whirlwind journey across London, and was partly inspired by Wilcox’s love of the UK capital.

“The project started as a group of characters I was interested in and a desire to set something in the London that I recognised. I wanted to reflect the unfortunate recent trend of job lay-offs but also the nomadic lifestyle the city invites.

“One of the challenges was that our story takes place over 24 hours, so continuity was always an issue,” continues Wilcox.

“We also had babies, cats, non-professional actors, a 10-hour day on a live underground train and locations we had to find for ourselves — so there was plenty to keep us thinking.”

Screen paid a fun visit to the production while shooting at the glamorous Oceana club in Watford, pictured above, just a few hours after the final revellers had gone home.

And of course, it wouldn’t be a UK film if the weather hadn’t played some part in the proceedings:

“On day one we were met with four inches of snow, which was very much unscripted,” adds producer Fiona Neilson. “We were constantly on our toes, responding to the UK’s traditionally bad weather.”

The film is due for completion this month.