The model for exhibition, finance and consumption of movies has remained the same for the best part of a century - but digital technologies are changing everything. ScreenDaily teamed with Ernst & Young, Heenan Blaikie and First California Bank to assemble a panel of experts who made their observations on this watershed moment. 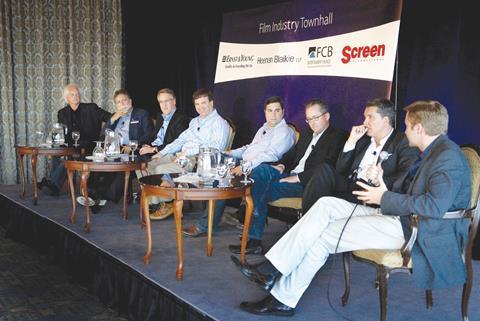 At this year’s Toronto International Film Festival, Screen International partnered with Ernst & Young, Heenan Blaikie and First California Bank to present a townhall meeting on the state of the industry. At a watershed moment around the delivery and consumption of films, the discussion, moderated by Screen editor Mike Goodridge, provoked divergent ideas and debate about how the traditional model of finance and distribution is failing and how it will evolve.

Todd Wagner
I made my money in technology, so I didn’t grow up in this business, and in technology it’s all about change. If you look at all these business models that are going to happen in the digital world, you have to remember that everything was analogue until 1995. That’s how quickly technology can disrupt something.

My favourite technology saying is that it never goes as far in two years as you think it will, and it always go further in 10. And so everybody is always asking, ‘What’s it going to be like next year or in 10 years.’ I promise you nobody knows. But what is different is that when I first started meeting studio executives back in 2001, technology was just starting to impact the business and there was a lot of fear about what it would mean.

The fact is, this industry can no longer avoid technology - they are now married and people are either going to change and rethink their business models from the ground up, or there will be carnage.

Mike Kennedy
We’ve been doing the same thing in exhibition pretty much for 80 years - putting up flickering images on a screen and selling tickets, in addition to being purveyors of popcorn and advertising. It hasn’t ever been a big technology business. We fought sound, we fought VHS, we fought Cinemascope.

We pretty much fight any technology that comes along because exhibitors tend to be comfortable with the model because it works. And the studios are comfortable with the idea of windows because they think it works and unfortunately I think eventually it’s not going to work any more. The National Association of Theatre Owners (Nato) in the US has respectfully said they want studios to wait three or four months before moving on to the next availability, but things are happening that are now changing that.

As a smart exhibitor, we have to look at the business and ask, ‘Where is it going and how do we position ourselves to be part of it?’ I can’t speak to my brothers in the US but I get the sense they’re not doing that, they’re trying to hang on to that window for as long as they can and I believe that could be a fail model.

David Garber
Piracy is the single driving force towards the change in technology and the multi-platform model. Young people want what they want, when they want it and they want it on multiple platforms. But the technology which is coming - 3D in the home, the opportunity to socially communicate while watching a movie over the internet - are going to change the business. Global piracy will drive us towards a day-and-date release structure on a global basis. So the studios can take that investment, monetise it in a single day and draw down the money from all the markets simultaneously. The purpose of windows is to slow down that process to get repeat buys. The fallacy in that is that I believe repeat buys exist even if they are released simultaneously.

Joe Berchtold
There’s a huge pressure for exhibitors to become great retailers and I don’t think historically exhibitors have thought of themselves as retailers. We have to create choice and opportunities, obviously respecting and understanding that there are certain dynamics in place today. Exhibitors play a role in the marketing of the movie and creation of the brand and it’s their right not to play the movie if Todd [Wagner] wants to put it on TV on the same date. At the end of the day, it means everybody stepping up their game. They have to start with the consumer and work backwards, as opposed to starting with the technology and moving forwards.

The internet: friend or foe?

Todd Wagner
Technology has unintended consequences. The premise of the internet in 1995 was to give people content they couldn’t otherwise get - it was putting up radio stations so that if you lived in another part of the world you could access it. The idea was the internet could connect you. Now the internet, in my opinion, has in many ways become the foe because it’s taken what was supposed to be a place that would give you product that otherwise you couldn’t get and now people are getting things for free. You’d never hear of our company giving anything on the internet for free, nor will you ever because all you’ve done is cheapen what you have created. Shame on people that went out and gave things away for free, that didn’t understand what technology is and what it isn’t.
Are local distributors a dying breed?

Patrice Theroux
As a distributor in local countries, we don’t generate product, we acquire it from the producer and looking into the digital age, people are saying, ŒWhat’s your role, why do we need you?’ Well, they don’t hire us to move about 35mm prints, there are companies that do that. It’s our local expertise that matters and sales agents don’t come to me because we’re buddies, they need our local expertise, it’s our knowledge of the audience. Audiences don’t react the same way around the world to the movies.

Stuart Ford
The question right now is that there is a model heavily reliant on those distributors contributing a fairly significant portion of the production or recoupment cost of the film by virtue of their ability to advance money or at least to share in revenue streams. As their function evolves, the question is, will they be the guys who advance that money or create those revenue streams or instead, as I think is almost inevitable, do people like me - who are putting these movies together - have to look to other sources and other parties? And the role of the distributor becomes a little bit more compartmentalised as more of a marketing function. Maybe iTunes or telecom companies become the backers, maybe other sources of equity capital who want to get into the business. We’re trying to figure out what the next line of capital is.

Glen Basner
For those that finance movies through sales, we’re just going to keep looking where the money is coming from. If a new company called pTunes comes in to compete with iTunes and they want to try and buy up market share, we’re going to find them, we’re going to hunt them down and we’re going to close a deal with them because that’s what is going to get our movies made.
I think the distributors are still active. I think maybe they are more cautious than before but we have a fundamental advantage in that the great majority of our customers cannot supply themselves with enough movies so they have to come to us. It’s up to us to adapt to the marketplace and find the movies they want at the valuations that make sense, and do it in a profitable fashion. Is there a financial model for a $30m independent movie today? Have a studio pay for it or don’t make it or lose a lot of money. The old $30m movie is now the new $20m movie.

Todd Wagner
What drove all those marketing costs by the studios were the pay deals. It wasn’t just rampant spending to market the movie. It was that they wanted to generate enough money to kick in the pay deals and feed everything else downstream. As those pay deals die off, sanity returns. People will start to realise that if they want to get their movies made, they will have to do it for a certain budget and then everything can recalibrate and change again and you can get creative on the distribution side.