Veteran journalist and BAFTA-winning filmmaker John Pilger returns to the screen with new documentary Utopia, about the plight of indigenous Australians. 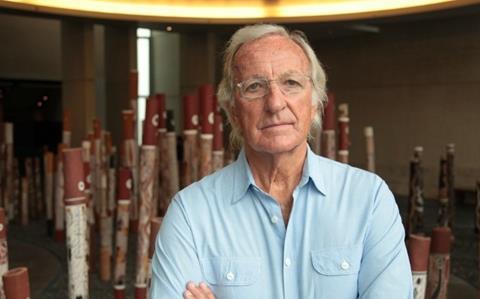 Pilger, who has reported discrimination against Australia’s first people since the 1970s, describes his new film as “a journey into a secret country” describing “not only the uniqueness of the first Australians, but their trail of tears and betrayal and resistance – from one utopia to another.”

Never one to shy away from controversy, the film will be released in Australia on Australia Day (or ‘invasion day’, as Pilger also calls it) and will play at indigenous festivals including Sydney’s Yabun Festival.

Executive producer Christopher Hird of Dartmouth Films, also producer of Pilger’s last documentary The War You Don’t See, praised the role of UK distributor Network Releasing in getting the film made: “Utopia would not have been possible without the very, very substantial support of Network.”

Utopia is in cinemas Nov 15 and is available on DVD from Dec 2. Dartmouth Films is releasing theatrically in association with Network, which is handling DVD and iTunes.

You say in the film that there is an apartheid taking place in Australia today?

Well, one of my interviewees, the distinguished Aboriginal film producer and actor Patricia Morton Thomas, made clear that she regarded Australia as an apartheid society and that’s the view of most indigenous people I’ve spoken to. As she said, the signs may not say whites or blacks only but that was never the essence of apartheid in South Africa. The divisions were always economic, cultural and in many respects simply race-based, and that’s all true in Australia.

And it’s something that you personally believe?

Apartheid is a very potent African word, which literally means separate development. That was the euphemism used in South Africa. It was a word and policy that distinguished the majority from the controlling minority. That’s reversed in Australia - it’s a controlling majority and an outcast minority.

The point of the film is that there are two worlds. One is the world in which people have a very good life, a very good material life. For example, according to one recent report, Australia was declared the richest country in the world. That material life is assured for the majority, not all, but the majority.

That majority conforms to a particular ideology, to which most of the indigenous people of Australia do not conform. Some of them do, of course, but the people I filmed in remote areas do not. The word ‘reconciliation’ is used in Australia, and really that means come over to us and be like us.

Is Australia unique in the way it treats its indigenous communities?

I don’t think its unique at all. I think indigenous people are treated in a very similar way in all those societies that have been colonized. The United States, Canada, South America, New Zealand, certainly South Africa, there’s a similarity in all those cases in the aggressive take over that colonialism always presents to indigenous people.

What makes Australia unique was highlighted in a good report by an academic, professor Paul Kauffman, in which he compared all the western societies that have indigenous populations, and found that all indicators put Australia last. The reason for that is that Aboriginal people have never had a treaty. They never had the very basic right, the very basic mechanism to negotiate their own way of life and the right to live differently.

But also the right to share the natural riches and opportunities in a country like Australia. The first British settlers in Australia declared the country an empty land. They simply eradicated the very reality before their eyes. And that was built into the Australian legal system. It was only in the 1990s that that notion was overturned and there have been limited land rights for Australia’s first people.

In the Northern Territory it was almost an accident that indigenous people were given land rights. Successive governments have tried to call those rights back because of the mining opportunities in the area. It has enormous deposits of uranium and is considered a very materially valuable part of Australia.

Governments don’t want to negotiate with the indigenous people, who quite rightly want a part of the spoils, yes, but more than that they want to live in the way they want to, to expresss their difference. And it’s that difference that is not acceptable.

The nature of Aboriginal people is very attractive. I’m not romanticising them, but it’s a very inclusive nature. It’s quite trusting, it’s wise and it’s very confident.

It has a confidence that westerners find difficult to understand, the confidence in being at one with your surroundings and with life.

When the first invaders arrived – before a lot of the Aboriginal people got together and started fighting them, and they really did fight them - they would often welcome them because they had no concept of anyone arriving taking land because the land didn’t belong to anybody.

What surprised you most when making the film?

I’m not too surprised by many things these days, especially the imposition of power on vulnerable people. I suppose I was surprised at the level of enduring cynicism that is expressed in the way Australian government treat aboriginal people.

I was surprised at the way that arcane, self-perpetuating bureaucracy is still imposed on Aboriginal people. They are trapped in a maze of bureaucracy. During the famous ‘intervention’ the Government spent something like 40 million dollars on inventing a way of controlling about 30 thousand people.

They invented something called a BasicsCard, which to me was an equivalent to a South African Pass Book. It meant you had to shop in certain shops and you could pay your bills on this card. It was a means of controlling you. And this basics card cost millions for controlling a very, very small number of people.

So they invented that rather than dealing with the basic poverty in these communities. Housing, for example.

One of the things I would have liked to have had in the film, which was in it originally, was an explanation of white industry going for the black dollar.

Aborigines make a lot of money for the white people, billions of dollars actually. There are plenty of white contractors who get government contracts to go and do things in Aboriginal communities, which they do badly. They jerry-build. Whole teams of construction workers are put up in hotels to build a couple of poorly erected houses.

You said at one point that there was rape by early white Australians of Aboriginal children but you didn’t go into it in any detail or evidence of that.

Well, that was the basis of The Stolen Generation. It probably needed more explanation, but I think that’s a story that’s been well and truly told.

The majority of Aboriginal people are mixed race. And many are mixed race because the first settlers, like settlers all over the world in colonial countries, took a lot of the women.

There are well-documented stories of rape of Aboriginal women who were sometimes tethered outside work camps.

How much sympathy do you think there will be for the film in Australia?

I don’t think sympathy is the word. As somebody said to me recently: ‘There’s no out in this film’. And that pleases me because it gives an Australian audience no out. The film is obviously made primarily for the Australian audience. What they do with it is entirely up to them, but of course there will be plenty of discussion and debate.

I think the last thing Aboriginal people want is sympathy, frankly. I think they need action. Though people in the film do invite sympathy, there are also inspiring stories. Arthur Murray is one example [after Murray’s son died in police custody, both Murray and his wife become vocal campaigners for change]. There have been great acts of resistance [some are touched on in the film].

There is a kind of wilful indifference in Australia to this issue. There is a lot of blame of the victims: ‘Ah, we’re always throwing money at them and they’re always drunk, they’re scroungers…’ You get a sense of that from the vox pops in the film.

Not everyone thinks that, there are a lot people who really believe there should be justice for Aboriginal people, but they haven’t made their voices heard politically.

You have been documenting this struggle for decades. What change would you most like to see next?

One word: treaty. That’s the beginning.

Offered by the government…

Yes, but it also has to be accepted. It has to be constitutional; it has to be built into the very fabric of Australia’s laws and it has to be achieved through genuine negotiation and consultation. At the moment Aborigines have no power within the framework of modern Australia. It’s patronage, co-option and hand-outs. Nothing really will change until there’s a treaty.

Well, I was asked. But I decided I’d prefer to show it at the old NFT, the BFI. I prefer my films to stand alone. The LFF is an excellent festival, but I’ve always shown my films at the NFT.

I’ve got a collection of books that I’m working on and I’ve got another film in mind. It will touch on WikiLeaks and Julian Assange. We’ll probably make that next year.

Dartmouth Films is releasing theatrically in association with Network, which is handling DVD and iTunes.

Oscar-nominated HIV documentary How to Survive a Plague is released by Dartmouth Films in the UK this week.