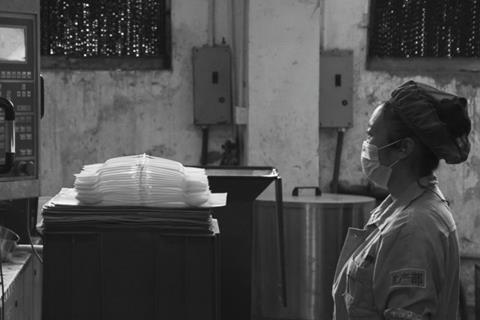 Latvian director Laila Pakalnina is well-known for her documentaries, both shorts and features. In a career spanning 30 years, her short films have been selected for festivals including Berlin, Cannes and Venice and she was recently the recipient of a retrospective at the Pompidou Centre in Paris.

Her latest work is the 65-minute Spoon, a deceptively simple affair in which Pakalnina charts the creation of a meagre plastic spoon. But within this simplicity lies a nuanced commentary on both the wastefulness of human society and the magnificent spectacle of human endeavour.

Filmed in a myriad of countries – including China, Azerbaijan and Norway – Spoon is a co-production between Pakalnina’s Hargla Company alongside Norway’s Mechanix Films and Lithuania’s Just A Moment.

The dialogue-free Spoon is screening at Karlovy Vary in the documentary competition section, marking a return for the filmmaker whose documentary shorts Dream Land (2004) and Theodore (2006) screened previously at the festival. The film receives its festival premiere today (June 29).

How does inspiration strike for a film like Spoon?

Films just come to me. Normally as a place, as an atmosphere, as something visual and then you understand – this is film! Spoon came differently, with a phone call from Kaspar Kallas, my friend and colleague from Estonia. Kaspar was just back from Africa where he saw lots of plastic trash around. He proposed that I make a film. This was not the first time that someone has proposed an idea for a film. Usually I say, “Yes, yes, nice idea!” and forget about them as, even if the ideas are good, they are not ideas for ‘my’ films. And it seemed that Kaspar’s proposal was ‘not my film’ for sure – he propsed a TV journalism piece, with voiceover, etc.

So I said, “Yes, yes, nice idea!” and continued my 20-kilometre run. But while running I started to think: what if I take this topic and make it “my film”? Black and white, static, composition-based shots. No dialogue. To talk about plastic and also about life, in film language.

How do you go from having the idea to deciding how you’re going to go about filming? With all the countries and places you visit, it seems a big task for such a ‘small’ idea.

The first important thing to understand was not where to film but with whom to film. It was a very important decision to work with cinematographer Gints Berzins with whom I’d studied with at Moscow Film School (VGIK). We had created our common understanding about what film is and made many films together.

Concerning countries, one thing is to decide, another thing is to wish to travel far and wide without a big budget. But the budget was not as big a problem as getting permissions for shooting of the spoon-making process where almost all of its parts appear to be special, secret, confidential etc. What helped was our commitment to make the film out of whatever comes.

But of course, we knew that to complete the film it was very important to get in the spoon factory. And we did it! As I remember, it was nine months  of trying, writing, waiting etc. Now Spoon is finished, I want to work on films where you just decide and shoot and don’t wait for permissions.

What did you tell the people who appear in the film about the project if they asked?

We were honest. We said that we are making a film about the long and complicated process of making a plastic spoon, and on the short moment of its usage.

Spoon is a treatise on how humans treat things as disposable. But there’s also something almost magnificent about the human endeavour and effort that can go into something so small.

Yes, of course! And there is also a third aspect, or dimension. At least I hope that this third dimension is present here – something that is behind each shot. Something that you can feel, but can’t express in words.

You’re chiefly known for your documentary work, but you’ve also made fiction films.

I like and I need both. I feel comfortable when I do both. They almost parallel. Like now – Spoon is going to have its premiere and a few days after that we start shooting the fiction film In The Mirror. I was writing the script and developing it while Spoon was in production.

I always have many ideas. I make a competition of the ideas inside me. But two of them are already in production. The aforementioned fiction In The Mirror and also the documentary First Bridge. The special thing about the documentary is the fact that we shot it on the leftovers of 21-year-old 35mm negative. And it really worked. It looks great. I am looking forward to the post-production of this film.