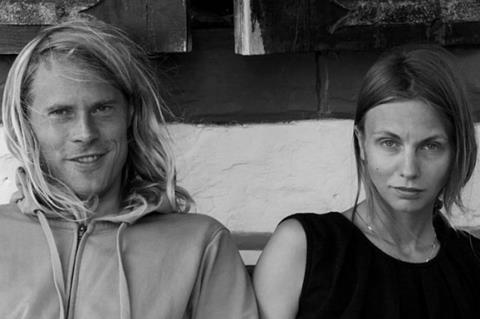 Via Carpatia, the debut film from young Polish directors Klara Kochańska and Kasper Bajon’s, makes its world premiere in the East of the West competition at the Karlovy Vary Internatioinal Film Festival on Saturday (June 30).

The politically-charged road movie follows a well-to-do middle class couple as they travel from Poland on a road trip across the Balkans. They are heading to a refugee camp on the Macedonian-Greek border to find the man’s father. As they draw closer they are forced to confront their own attitudes at the same time as discovering a Europe in which the migrant crisis is affecting everyone.

Screen: How did you bring the film from idea to the big screen?

Klara Kochańska: The first motive was to just act out. Do something independently. Not wait and tolerate things in silence both as professionals and citizens of Poland

Kasper Bajon: At the time [we started thinking about it] Poland’s government had refused to help with taking in and relocating refugees, even though we are a part of the European Union. We felt it is not only cruel, but also shortsighted.

Poland is only seemingly a homogeneous country - it is presented that way in the official discourse. But in the 1960s and 70s we had many students from the Middle East who later stayed here and started families. This fact inspired us. Then when we met with our friends and the ideal actors for this projects – Julia Kijowska and Piotr Borowski. It came to us that Piotr has a similar family story, which could be inspiring to all of us as a team.

The film has a very raw and naturalistic style – how did you shoot the film and was there much improvisation? Did you respond to real world events as they happened?

KK: This whole project had a very organic character. Everything was determined by everything else. In the beginning we had almost no money and a small group of passionate collaborators. We had only a van, six people in the crew and six countries to pass. We could not afford to take anything except a camera and a tripod. We could of course use handheld camera to be close to the actors, but our idea was not to make a “documentary” or realistic psychological movie, but a poetic picture in which the world surrounding the character would pay a role as important as the actors. We knew it might distance the audience, but we wanted that.

KB: The film was also in at least half of the situations improvised. In the first part of the shooting we had a base script with dialogue and situations but we wanted to have the freedom to react to what was going on around us. We wanted to be open to situations. To register the world in a certain moment.

KK: Yes. The visual language places the audiences quite far from the characters, and shows them always in the context of their surroundings.

KB: We felt that we have nothing to say about the so- called immigration crisis from the point of view of refugees. It would be dishonest. We know nothing about it. We can’t even imagine it sitting on our sofa in our home, with warmth and clean water in the tap . That’s why we chose to tell the story from our perspective of the comfortable and often silly western world.

You strive for a quasi-authentic feeling throughout the film. Who are some of your influences as filmmakers?

KB: [Abbas] Kiarostami is one of the most important directors to me as well as Otar Iosseliani. I feel a bigger connection with artists like Maya Deren then to the ‘classics’. I dont like the cinema seen as an industry. Recently I read how Murnau shot Nosferatu – he took a camera, an assistant, an actor, and the went together to an island called Sylt and together in this small group they shot a couple of scenes. You can call it naive, but I feel there was something beautiful to it. Without the fuss of ‘big production’, film is a much more innocent art.

KK: Kasper is much more radical than I in his statements and taste. I, on the other hand, always feel that my biggest challenge as a director is finding the right language for a certain story. And then my job is not too lose this focus and that all the elements will work and fall in the right place so we finally get what we are searching for. I would call myself a practitioner inspired by many different artists.

What are you looking forward to at Karlovy Vary? How do you hope audiences will respond to what is your feature debut?

KK: As always I would say I have no hopes – just curiosity. All I know is that this type of cinema is not at all mainstream in Poland. But in a festival like Karlovy Vary the people are used to diversity. It’s always full of lively audiences and I deeply admire their ‘No Barriers Project’, which makes it possible and easy for physically handicapped audiences to take part in the screenings.

Klara – you were previously at Karlovy Vary in 2016 taking part in Future Frames you’re your Student Academy award winning short The Tenants. How do you think your experience on that scheme helped you?

KK: It gave me a lot of strength to keep on doing Via Carpatia and it helped to emphasise what you need to have as a director is patience, faith and stubbornness.

What projects do you have in mind next?

KK:We have no idea if we will work together as two directors or will we go back to the relationship we had before when I was the director and Kasper was the idea giver and the writer. We are also partners in our private life. The project that excites us the most is a story set on one of the oldest and driest Atlantic islands (which is currently our home), where the inhabitants encounter – on beaches and harbors – amputated human feet. This also would be a movie where nature would play a major role. The older I get the more important the natural environment is to me. And I don’t know if I can go back to interior shooting only. Nature is a sign of eternity to me, something I can admire for hours.