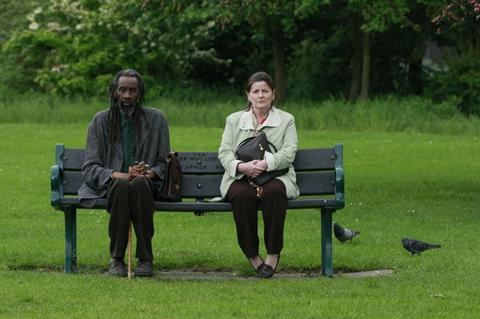 Brenda Blethyn and Malian actor Sotigui Kouyate are the affecting duo at the centre of London River, Rachid Bouchareb’s spare, astute drama about how conflict can sometimes draw people together. The film world is currently flooded with global-themed dramas about people from different walks of life finding their destinies linked, but Bouchareb’s film is an exemplary specimen of this strain, a tender-but-tough piece of realism that is also in the premium class of London dramas, from Blow-Up on, made by visiting film-makers. Timely and universal themes, plus emotional directness, should ensure healthy sales potential alongside solid audiences at home in the UK, while festivals should come knocking.

Dramatically spare, the film avoids the expected cliches about racial and cultural misunderstanding

After his commanding reinvention of the World War 2 epic in Days Of Glory, Bouchareb returns to a smaller canvas, persuasively channelling the British-realist mode of Ken Loach et al. Mainly (and plausibly) French-language despite its UK setting, the film is set against the background of the July 2005 London bomb attacks. In Guernsey, churchgoing widow Elizabeth Sommers (Blethyn), who runs a small farm, hears the news about the bombs and starts to worry about daughter Jane, a student in the city.

Also concerned is Ousmane, an elderly African forester working in France, who sets out to find his long-estranged son Ali. Both characters arrive in the Haringey/Finsbury Park area of North London, and make inquiries in different directions - Elizabeth going to the police and adding Jane’s photo to the hundreds of ‘missing person’ notes posted after the bombing, while Ousmane is helped by a sympathetic Muslim community leader (Bouajila).

A piece of photographic evidence unites the two searchers, and although Elizabeth initially gives Ousmane a suspicious brush-off, the two prove to have more in common than either had imagined.

Dramatically spare, the film avoids the expected cliches about racial and cultural misunderstanding. Elizabeth’s wariness when exposed to London’s multi-ethnic world is concisely described, her Guernsey background setting her up convincingly as a middle-Englander who has had little exposure to other races. She is frazzled at meeting possibly her first Muslims and uncomprehending when she learns her daughter was studying Arabic - ‘I mean, who speaks Arabic” - but her confusion is subtly portrayed, without targeting the character as a racist.

Very much downplaying the part, slowly building the character of Elizabeth as she discovers the complicated new world around her, Blethyn offers her strongest lead performance since Secrets And Lies. Meanwhile, veteran Kouyate - who worked with Bouchareb in 2001’s Little Senegal - is a stately and immensely commanding presence, interacting with tender empathy in his scenes with Blethyn. Other Bouchareb alumni Bouajila and Roschdy Zem make their presence felt, as does Francis Magee as a policeman. TV footage is used to sharp effect, and unspectacular North London locations, shot in downbeat realist mode by Jerôme Almeras, build up an authentic sense of place, suggesting Bouchareb has more than done his homework. Armand Amar’s crisp, jazzy score is another considerable plus point.