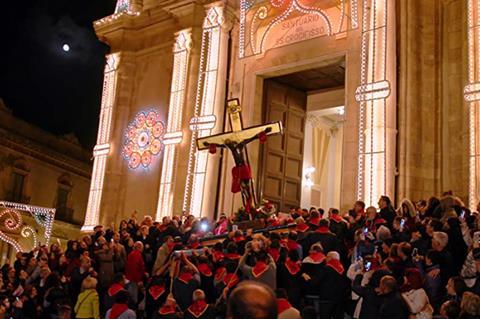 Palermo-born Luca Lucchesi accompanied writer director Hella Wenders as a creative producer and DoP on the production of two of Wenders’ documentaries Berg Fidel and School, School – The Time After Berg Fidel between 2007 and 2017. He has also worked as 1stAD, editor and DoP Wim Wenders on several projects since 2009. 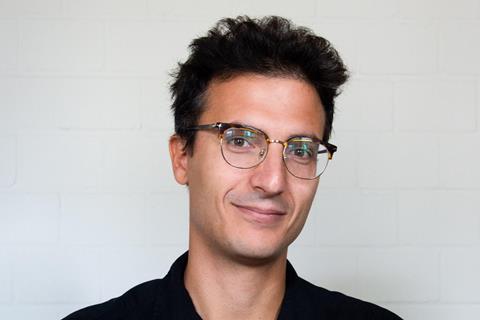 An alumnus of Berlin’s Nipkow Programm residency, Lucchesi has now made his feature documentary directorial debut with A Black Jesus, produced by Wenders’ company Road Movies, which had its world premiere at DOK Leipzig in the festival’s new audience competition. The film focuses on the statue of a black Jesus in the small Sicilian town of Siculiana, and the efforts of Ghanese refugees to be given permission to carry the statue during the annual procession. It will be released theatrically in Germany by Filmwelt next year, and is being handled internationally by Filmdelights.

How did you come to choose this particular subject?

I had initially planned to make a small private video for my family in honour of my father [Tanino], who came from Siculiana and had taken part in the crucifix procession shortly before his death in 2017. One hot afternoon, I went into the church at the top of the town and saw a group of African migrants kneeling behind the altar and praying to the black Jesus. This was quite a surreal thing to see, as there were demonstrations also going on at the same time in the town against the refugee centre.

Was it difficult to gain the trust of the locals and the refugees when you started researching the film?

It was more or less automatic with the local people because they knew me as the son of Tanino, Still, I wanted a real trust because I didn’t want them to think I was making a portrait of the town to attract tourists. The most challenging part in almost one year of research was trying to build a bridge between the town’s inhabitants and the guests of the refugee centre, and also to obtain permission to actually film in the centre. It was a time when the local politicians didn’t want me to film there and, if I did, then only with the police accompanying me. But I made it clear to both sides that I’m not a kind of investigative journalist, but rather a quiet observer of what was happening there. It took several months, but eventually I got this trust and then had complete access.

Did your presence with your camera serve as a catalyst for events?

I don’t believe in the concept of the fly on the wall when making a documentary. For me, when the camera is in a certain place, it is like the elephant in the room. I never asked anybody to do anything or staged any scenes, but I think my presence started a process and made it possible for [refugees] Edward, Samuel and Peter to see if they could fulfil their wish to take part in the procession.

You have worked on a regular basis with Wim Wenders since 2009, and his company Road Movies has produced A Black Jesus. How involved was he in the making of this film?

Wim is a very busy guy, but he always had time to watch the material – often 10 hours over two days — whenever I was back in Berlin. At the beginning, I was afraid to be my own cinematographer on the film, but he said that I should keep to this because this would be the only way for me to stay close to the characters and the story. He also suggested that I take away references to daily news reports about the political situation, and I am really grateful for that input because the film is now more like a fairytale and not tied to a specific location or time.

Have the film’s protagonists been able to see the film?

I was in Siculiana after the Venice Film Festival, and showed the film to a group of about 10 people from the town. The first reaction was very emotional because, due to lockdown, this was the first year in history that the procession could not happen. Thanks to the film, they were able to empathise with [the refugees] for the first time and have access to the daily life in the refugee centre which they never were able to get first hand. The migrants had been moved from Siculiana, but I have been able to keep in contact with Edward through WhatsApp and I sent him some parts of the film including the trailer.