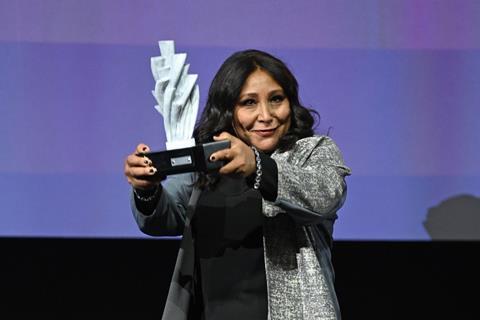 It is less than a decade since Haifaa Al Mansour broke out internationally as Saudi Arabia’s first female filmmaker with her debut film Wadjda which made its world premiere at the Venice Film Festival in 2012. It was at a time when cinema was not permitted in her home country.

In the interim, she has made another three feature films – Mary Shelley, Nappily Ever After and The Perfect Candidate – and also worked on a raft of TV shows. But most significantly her native Saudi country has lifted its 35-year cinema ban.

The now US-based Al Mansour returned to Saudi this week – having finished shooting the Netflix series Florida Man in North Carolina – to be feted with an honorary award at the inaugural edition of the Red Sea International Film Festival. She has been one of the stars of the festival, talking the red carpet on opening night and hosting a screening of Wadjda and a talk about her groundbreaking career so far.

Al Mansour talks to Screen about her career since Wadjda and the new role of cinema in her country.

How have things changed for you since the release of Wadjda?
Well, my kids were very little then. Now they are taller than me. Back then, I never thought I would make money from being a filmmaker. It’s not going to be my career, I thought. It’s just going be something on the side, where I do a documentary or a short or something every now and then. I wanted it and was working hard towards it but where I come from, my situation made me feel it was almost impossible. I still kept going, maybe just for the love of it, just because film gave me a voice. It’s amazing to me too now to be a full-time filmmaker.

You have just come off the set of Florida Man in North Carolina. How did you find your way to television?
I love American TV. It’s such a wheel. It can be really overwhelming, scheduling-wise, but it made me aware of all the trends in filmmaking. It made me a better filmmaker too because I work all the time. Filmmaking is like a craft: if you don’t practice it, you don’t get to be good at it. The more you do it, the more you understand creatively, and administratively as well.

Managing a crew and making sure that we meet our schedule is not easy. It’s amazing to be part of that and learning. Americans are such workaholics. So, it is the best place for training. TV lets me explore my passion for genres. I love horror and soon I’ll be working on Tales Of The Walking Dead, which is awesome. I’ll be working with zombies on staff, which I never imagined.

Do you draw on different tools when you’re working on a film in Saudi Arabia than when you’re working on a film or television project overseas?
Here, I think you wear many hats. Just because you have to occupy a lot of roles because it’s a starting industry. But I think the main difference for me is the intimacy. Like, you know the language, you know the people. Everything becomes a little bit closer. When I work in this region, I usually work on very pure Saudi projects, which is almost like working with people from my hometown. It’s special in that way.

Early on in your career, it was pretty easy to characterise you as a director interested in telling women’s stories. How do you think of your work and career?
I still feel passionate about portraying strong female protagonists, no matter where. Mary Shelley was a very British film, but if I didn’t connect with her story, I wouldn’t have been able to tell who she is. In Nappily Ever After, Violet’s story is very African American. Maybe we have a little bit more in common with African-American culture, but it has its own history that I wasn’t part of.

What’s your advice for aspiring Saudi filmmakers, women and men?
Never take no for an answer and believe in yourself. When I started, this very established producer on TV said, “Haifaa is like a storm in a coffee cup.” I was like, “I’m glad because I don’t like storms and I’m not a storm anyway.” Don’t listen to those people. If you have passion and you work hard, you’ll make it.

You’re a bit young to be the subject of a career retrospective, don’t you think?
Well, I think so [laughs]. I’m still at the prime, I hope, of my career. It is amazing to be acknowledged, and in Saudi Arabia. It’s so wonderful to be in a country that is opening up to the arts. Arts and cinema and literature is what builds a nation and gives it heart.

For so long we Saudis sheltered ourselves from being part of wider global citizenship, and now we are part of it. Films make us more. Empathy creates empathy and I think, as a nation, it is important for us to be more connected with everybody else in the world. I’m so proud to be one of the pioneers, and I hope I inspire other female filmmakers to take the same steps.