For twice Oscar-nominated UK cinematographer Seamus McGarvey, working with Tom Ford on Nocturnal Animals was an experience like no other. 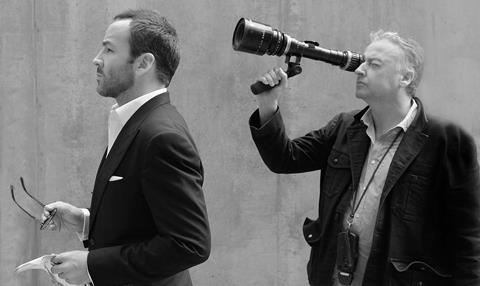 Over the past 21 years, Seamus McGarvey has shot 29 feature films, from intimate, intense dramas such as We Need To Talk About Kevin to colossal blockbusters such as Marvel Studios’ The Avengers.

Yet none gripped the two-time Oscar-nominated cinematographer so quickly and forcefully as Tom Ford’s psychodrama Nocturnal Animals.

“I normally find it very difficult to read scripts in one sitting,” says McGarvey, “because you cogitate over every element, wondering how you might shoot it. But this was one where I just sat down and was gripped. It’s rare I read a script in one sitting. It left me numb.”

McGarvey compares his experience reading the script to the way its main character, Los Angeles art gallery owner Susan (Amy Adams), is herself absorbed by the story’s horrific narrative-within-a-narrative, a west Texas abduction thriller written by her ex-husband Edward.

“I felt like Susan reading the manuscript from start to finish,” he says.

It is not the only way McGarvey connects himself to Adams’ on-screen persona. In many ways, he feels, her character is the cinematographer of the movie.

“There’s a sense that, narratively, the audience feels there’s only one person in the film, Susan,” he explains. “And all the other characters are kind of shards of the kaleidoscope of her imagination.”

Looking at McGarvey’s previous work - especially his four big-screen collaborations with Joe Wright (Atonement, The Soloist, Anna Karenina, Pan) and the UK-born director’s signature long tracking shots - it is unsurprising to learn the Armagh-born DoP usually starts conceiving his shots before he has even finished his first script-read.

But though a consummate technician, his style - from his early photography, through his numerous documentaries to even his blockbuster pictures - has always exhibited a warmth and intimacy, especially when capturing and exploring the complex contours of the human face.

No wonder he keyed into mind’s-eye view of Susan so effortlessly; and no wonder Ford was so keen to work with him, given the film’s tight focus on Adams’ luminous visage.

It was, says McGarvey, an instant “creative rapport” between the two, with Ford “open to collaboration” and encouraging “a democracy of ideas” from the outset.

Given Ford is a photographer as well as a fashion designer, McGarvey was surprised that, during their early conversations, the director avoided prescribing any visual references.

“Sometimes you go into projects and there’s a barrage of imagery that’s been pre-ordained, and it leaves very little wiggle room for your own thoughts to feed into it,” he says.

“But at the outset he was purely verbal about the film, in a very articulate, precise way.”

It was not until they got into the nitty-gritty of delineating the film’s three distinct levels of narrative (Susan’s Los Angeles; Edward’s west Texas fiction; Susan’s nostalgic flashbacks) that Ford produced “a disparate array of inspirational images pulled from magazines, photo-books, even swatches of material; a whole, wonderful smorgasbord of colour and light and graphic influences that showed the progression of the film”.

Interestingly, for the Los Angeles scenes, McGarvey drew inspiration from horror films such as Roman Polanski’s Rosemary’s Baby and Robert Wise’s The Haunting, using “partially seen images, one of my favourite tropes of horror”.

For the abduction thriller strand, “we wanted to make a very crisp and jagged, almost lithographic screen-printed colour noir”; and for the flashbacks, he employed glass softening filters to give them “a sort of frothiness, a levity and optimistic perspective”.

“Film sets are often high-octane places where tempers can flare and relations can sour,” he says.

“But Tom is such a lovely person to spend time with, and a really inspiring director. And for him to direct a movie that he has written, and shoot largely at night while designing his next collection…”

McGarvey chuckles. “The man is something of a superhuman.”

It turns out to be an art installation in Susan’s gallery, during an opening-night party, and is the means by which the audience is introduced to her.

“I think he wanted an audience to wonder, ‘What is this? What are we watching?’ He wanted this kind of carnivalesque feel. He talked about Fellini, he talked about Sunset Boulevard, and obviously he’s interested in the tradition of the nude, from Lucian Freud to Jenny Saville.

“The women, who were a mix of actresses and dancers - one was a comedian who’s quite well known in LA - were great fun to work with. They were brilliant dancers. They were so forthright in their comfort with themselves and their plus-size. We shot them at a studio in Los Angeles, in slow motion against red velour. And actually it was the first day of the shoot. Like the rest of the crew, I was thinking, ‘What the hell is this? What is this film we’re making?’

“It folds into itself as a very distinct section, but in the same way as a Bond opening sequence, it’s a flourish at the start of the film. There’s a theatrical intent to it; basically it’s ‘Let The Show Begin’, and it frames what the audience might go in thinking. But there’s an unsettling theme of darkness there. It presents a kind of corroded Americana, with the flags and the tinsel. Tom wanted the audience to realise that what you’re going into is something more psychological, more kind of dangerous.

“The film opens in vibrant, super-saturated, posterised colour, and then Susan is there, after the evening has ended, and she’s sitting in black. After all the hullabaloo and celebration of the opening, here’s a woman alone, thinking, ‘What’s all this about?’”

The Scene: In the manuscript read by Susan, Tom Hastings (Jake Gyllenhaal) is night-driving through the desert with his wife and daughter when they are pursued by another car, driven off the road and confronted by the predatory Ray Marcus (Aaron Taylor-Johnson) and his gang.

“The cat-and-mouse chase was the hardest sequence I’ve ever shot. Such a challenge,” says McGarvey.

“We had to light a mile-and-a-half of highway in the Mojave desert and play it for dark. You had to sense the danger, the shark-like approach of the rednecks’ car; we wanted to play with silhouettes and figures looming out of the darkness. But shooting on film - Kodak stock and Panavision cameras - it’s tough to light darkness and make it feel like proper moonlight, yet also underexposed enough to feel the terror of the obscurity.

“It was a big number. We were shooting with a stabilised arm on a pursuit vehicle, and we had this huge construction crane with lights on. I’m getting hives just remembering it! We had very limited time to shoot that sequence, only three nights, so we very carefully plotted it out. Every single shot was treated like a very finely tuned action sequence; we pre-vizzed with stunt co-ordinator Jack Gill, and Tom and I storyboarded it shot by shot.

“But once the action pulls over to the side of the road, the A-camera operator and I - I was the B-camera operator for the film - just threw the cameras on our shoulders, lit it in a way that is apparently lit from the headlights of the cars, and ran longer takes. So it gave the actors a tremendous amount of freedom to improvise.

“Having come from documentaries and a lot of handheld work on music videos, I love getting down and dirty with the camera on my shoulder and just following the action. And we picked up some interesting shots that we may not have otherwise found. There was a great élan and dynamism to that.”