Palm Springs is showcasing 19 features as part of its central and eastern Europe focus. Screen meets the film-makers behind two of the titles. 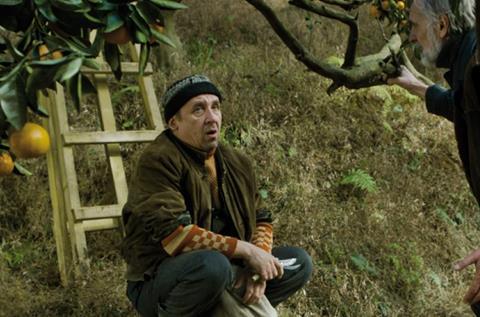 Tangerines centres on an Estonian carpenter who has refused to flee the conflict engulfing his small village, in order to help a friend tend his crop. The old man takes in two soldiers from opposing sides who are forced to coexist while convalescing from injuries sustained in the conflict.

“I never like to take sides in these kinds of senseless situations, as this war was to me. And Estonians gave me a good tool to stay as neutral as possible. I was so carried away by this idea that I wrote the first draft of the script within two weeks,” says director Zaza Urushadze.

Urushadze is moved emotionally and creatively by people who are able to maintain their sense of humanity and community in the face of extraordinary adversity. For him, the war between Georgia and Abkhazia serves simply as a backdrop. The true heart of his film comes through the examination of his characters and how they interact with one another and grow from their interpersonal experiences.

“In making this film, I asked myself if it were possible to stay connected as human beings in very critical and dire situations. I concluded that it is, and that there are people around who are able to carry these values,” Urushadze explains. “The answer to that question was my primary message. Also, I had a personal connection here. I admire my grandfather because he was a man who personified those values.”

Urushadze hopes audiences walk away from this film pondering their own ability to forgive and empathise. “Tolerance,” he adds. “The ability to look at the facts from the side of perceived adversaries and not solely from the subjective point of view.”

The film manages to blend humour and solemnity. “I hope we managed to create a film on a very serious topic that still has its funny moments. I hope the audience leaves the cinema with a warm feeling.

“Such a story could happen anywhere and anytime. It’s quite universal. Most important for me is the upholding of principles and relationships in the most intense and extreme situations; when the human instinct to survive comes to the foreground.”

Tangerinesis picking up awards-season steam after it was nominated for best foreign language film at the Golden Globes.

Oles Sanin shines a light on the plight of the Kobzars in Soviet Ukraine in the 1930s in his stirring Ukrainian box-office hit, The Guide.

The Pronto Film production tells of a US boy who acts as a guide for a blind minstrel during the tumultuous and genocidal time of Stalin.

“The Kobzars were the carriers of Ukrainian oral history, language, tradition and culture,” says Sanin. “They were travelling minstrels who sang about freedom and fighting for independence.”

The Kobzars’ story is closely bound up with Ukrainian identity and is one of the reasons why Stalin outlawed their songs and tried to turn them into instruments of the Soviet propaganda machine.

“When everything failed, he decided to simply kill them,” says Sanin.

The film-maker secured backing from the Ministry of Culture of Ukraine for the $2m film in 2011 and it shot in Ukraine over 82 days, wrapping in October 2013.

The Euromaidan protests the following month that eventually led to the 2014 Ukrainian revolution scuppered the planned January 2014 release, although in the end it worked out well. “We realised the film was more relevant than ever, and delayed release to November 2014.”

The Guidesold more than 277,000 tickets in its first 25 days and overtook Brad Pitt’s Fury at the local box office.

“The regime of Vladimir Putin won’t like [the film] and won’t allow it to be shown. Inside Russia many people want to see it,” says Sanin. “It’s important that viewers understand the film is not anti-Russian; it’s against the totalitarian regime that wanted to destroy the culture of the people. Russians want and need to see the film.

“I never thought to make a film about the murder of the Kobzars,” adds Sanin, who as a child loved folk music and guided a Kobzar for a week. “In 2004 I met the actor Jack Palance and told him several stories I wanted to film. Jack told me this was a very important story, one the world needed to hear.”