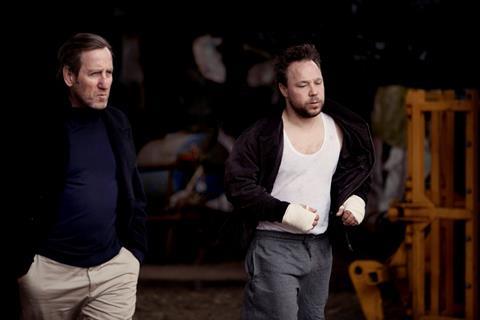 Screen sat down with former Star of Tomorrow David Leon to talk about his feature directorial debut, Orthodox, ahead of the film’s screening at the UK Jewish Film Festival (Nov 7-22).

Orthodox follows Benjamin (Stephen Graham), an orthodox Jewish butcher who struggles to make ends meet and to care for his wife and son. To make some extra money, he turns to his long-time friend Shannon (Michael Smiley), who runs a variety of criminal operations, including an illegal bare-knuckle boxing ring where Benjamin has had success in the past. As the pressure grows on Benjamin, it starts to become just a matter of time before his life collapses around him.

An orthodox Jewish bare-knuckle boxer… where did the idea come from?

My father is Jewish and my mother was not. As a consequence I’ve always been fascinated by that world – less the religion, if I’m honest, more the culture.

I spent a lot of time in the community. I looked at it from different angles, trying to find an in for a story.

In the 1900s the Jewish community was seen as an underclass. The men found it very difficult to get proper paid jobs. As a consequence they used to fight for money. You have this long heritage and tradition of Jewish boxers.

Yet, when I spoke to a lot of these cultural leaders and rabbis, I found out that within the Jewish faith the idea that one man could inflict pain upon another wilfully is absolutely frowned upon.

Did you encounter any particularly formative events during your research?

There was an incident where a young Jewish boy was set upon, name-called, by a lot of secular kids, a fight broke out and he got beaten – I sort of stepped in, a few people did, and the kid went on his way.

It made me think a lot about that kid and what he must deal with on a regular basis – I thought about what was in store for him, bearing in mind the very stringent requirements deemed of him within that community.

Orthodox often feels like a period film, despite it being set in modern times, why did you make it that way?

The Hasidic community is stuck in a time warp to some extent. I wanted the film to have a slightly timeless quality to it. I didn’t want it to feel kitchen sink.

They’re sometimes reluctant to assimilate with mainstream society. Part of it is the refusal to accept that there is anything outside of their community. They have their own ambulance services and police force.

That was probably possible 30-40 years ago, before the invention of television, but now they have mobile phones, for example, because it’s impossible to get by without them.

You have kids being brought up in the 21st century who don’t have televisions, don’t have access to the outside world, yet on their doorstep they’re seeing kids from all kinds of ethnicities and backgrounds. It’s a fascinating canvas that you could tell a myriad of stories on.

You initially made Orthodox as a short film, how did you convert that into a feature?

We made a short film and then used that to generate the investment for the feature – it was a two year process. We made the short for £13,000, had a five day shoot in Newcastle, and we cast Michael Smiley and Stephen Graham. We told them the intention was to go on and make the feature so they were invested in the short, which would act as a pilot for the feature.

We were putting together an SEIS through small investors, but Stephen was on option for Boardwalk Empire and they needed him too early, we couldn’t get it done. So we went to see Ingenious Media [a financier whose credits include Suffragette and The Drop] and asked if we could have £150,000 next week. They were already about to announce an SEIS fund, and we came along with a ready-made film at exactly the right moment, with numbers that made sense, we had eight days of negotiations and the money was in the bank.

You’ve also had a successful acting career, with roles in Alexander and RocknRolla, does that background make people more receptive to the idea of you as a director?

I think it’s a natural assumption, that it might be a factor, but I think that’s only one part of it.

One of the great things about being an actor is you get the chance to be around film sets, to observe how different people in all those departments do those separate things.

I’ve had the fortune to work with some of the most interesting directors around. I’ve also worked with directors who aren’t so good, and possibly learnt more from them.

Where does Oliver Stone (who directed Alexander, Leon’s acting debut) fit on that scale?

Oliver Stone was a baptism of fire, yeah. It was very surreal, a $150m film, you could easily think that it is always going to be like this, but you know it won’t be. You wouldn’t necessarily want it to be like that, it’s a very strange reality.

I remember Oliver had six producers all watching and whispering in his ear. That should’ve been one of the greatest films ever made, it’s an incredible subject matter, but in my view it ended up being something that I didn’t know what it wanted to be, it was a real shame. Had he had less distraction it might’ve been a clearer vision.

Orthodox plays at the UK Jewish Film Festival, and will receive a UK release in early 2016.