The Russian film-maker and producer discusses their latest documentary, which receives its international premiere at the Tallinn Black Nights Film Festival. 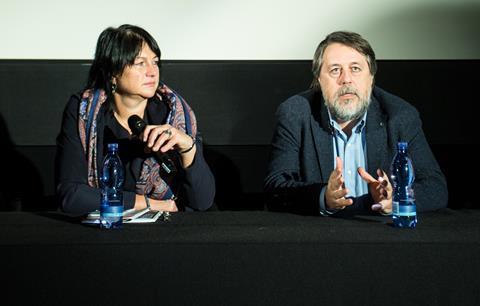 Russian film-maker Vitaliy Manskiy is not one to shy away from controversy. His notable successes include hard-hitting documentaries Pipeline (aka Truba) that won Karlovy’s 2013 Best Documentary Award, Motherland or Death and Rassvet/Zakat. Dalai Lama 14.

Born in the USSR-controlled Ukraine in the 1960s, Manskiy began his career studying cinematography at the All-Russian State Institute of Cinematography (VGIL), and has since made over 30 films addressing a wide range of socio-political issues.

His latest documentary Under The Sun is perhaps his most complicated to date, involving a shoot in North Korea made possible by tedious negotiations between Russian partner Vertov.Real Cinema and the North Korean authorities.

At its international premiere at the Black Nights Film Festival, Manskiy along with producer, Simone Baumann of Germany’s Saxonia Entertainment, revealed the intricacies in portraying North Korea’s ‘ideal life’ within its borders that few filmmakers achieve access to cross.

There were five different co-producers involved in the making of Under The Sun. How did each of the companies come on board?

Baumann - Initially there was support through Russian company Vertov.Real Cinema, but that was never going to be enough money. So they came to me, Saxonia Entertainment in Germany, Hypermarket Films in Czech Republic and MDR in Latvia to provide the overall funding.  By contract, North Korea’s Ministry of Culture receives a co-production credit but they did not provide financial support.

What was the negotiation process like when organising shooting permissions in North Korea?

Baumann - It was a very long process that lasted two years starting back in 2013. Vertov was the main liaising body with North Korea’s Ministry of Culture. In the end, the contract agreed that we would have one research trip, plus three different shooting periods at 15 days each.

Creatively, how involved was North Korea?

Baumann - Every single detail had to be approved by North Korea’s Ministry of Culture. From the script and each of the characters to the cameras we used and the shots we had planned. For Manskiy, who is used to having complete creative freedom, this was unbearable. He couldn’t leave his hotel room without a Korean official following after him.

How did the idea for the project begin?

Manskiy - I wanted to make a film in a country that was similar to former Russia. I had never been to North Korea, I only knew what most of us knew…

After your first research trip - did you find North Korea to be the country you had imagined?

Manskiy - From the outside, it looks like the Soviet Union in the 1930s. But if you look deeper, there is a crucial difference. In the Soviet Union, we had culture - theatres, libraries, films. And the Soviet people were critical thinkers - they complained if there was something they didn’t like.

If you compare that to North Korea - they don’t have any of those cultural memories. Everyone looks content, happy with the way things are. This is what I wanted to depict in the documentary.

How would you compare the current state of Russia with North Korea?

Manskiy - If things keep going the way the way they are - both will have elements of propaganda and controlled media. This is another issue I wanted to explore.

What did the shooting trips entail?

Baumann - Because of our initial research visit - we had a tight script with approved characters and locations. The shooting trips were tightly monitored (and filmed) by the North Korean officials. When it came to shooting the last 15 days, North Korea suddenly said we could not shoot anymore.

What was their reason for the cancelled third visit?

Baumann - Officially they said it was because of the ebola outbreak, and that people visiting had to stay for a minimum of six months involving an in depth quarantine. But personally, I think they didn’t like us shooting with any kind of slight aggravation.

Rightly so, Manskiy would get frustrated with the North Koreans telling him how to film all the time, to the point where he would turn around and start filming them on set.

How did this affect the storyline?

Manskiy - The story revolves around an eight year-old school girl who leads the perfect life, with the perfect family, in North Korea’s capitol city of Pyongyang (that will soon be home to the Winter Olympics in 2018).

Our last shoot was supposed to show the family preparing for the biggest cultural event in North Korea called Day of the Sun, and the theatrical production the young girl was to star in.

What are the legal ramifications of North Korea reneging on the agreed production contract?

Baumann - We fulfilled the obligations completely - the problem legally is on their side. They have tried to stop the film from being shown here in Tallinn by complaining to Russia’s Ministry of Culture. Out of obligation, Russia’s Ministry of Culture have passed on the message to the festival. But there is nothing legally they can do to prevent the film from being screened.

Will this affect the film’s continued run in the festival circuit, as well as its theatrical distribution in Russia?

Baumann - It will not affect its run at the festivals. We have another 10 festival invitations - with IFDA as the next scheduled festival stop with a screening in the Masters section.

As for Russia - since they are in relatively good terms with North Korea and they don’t want a confrontation, they will probably only give it a small theatrical release. But something to note - based on our contractual obligations, we supplied a one hour version to Russia which is the version North Korea will see.  At the festivals, we are screening ‘the director’s cut’ which is 106 minutes.