The UK team behind the new feature take on children’s classic Swallows And Amazons tell Tom Grater how the project set sail. 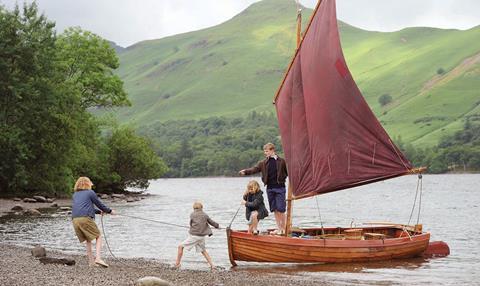 Producer Nick Barton has a strong track record, when it comes to film adaptations of quintessentially English, slightly odd stories. His credits include Calendar Girls and Kinky Boots, both based on real events. Swallows And Amazons, directed by Philippa Lowthorpe, is an adaptation of one of Barton’s favourite childhood books, about four children who spend a blissful summer of freedom and adventure sailing boats around the English Lake District. It was made into a BBC TV series in 1963 and a feature in 1974.

For Barton, the novel’s back-to-nature spirit chimes with what he sees as a reaction to the iPad generation of children, and a desire for their horizons to extend beyond the creation of a new Minecraft world. “People want to see stories where children have the freedom that their parents and grandparents’ generations had when growing up,” he suggests.

Barton negotiated the film rights with both author Arthur Ransome’s estate and Studiocanal UK, which had acquired the 1974 film for its library. He also approached BBC Films, which came on board to help fund the development process. Writer Andrea Gibb, whose credits include family film Dear Frankie for Pathé in 2004, was hired to write the first draft of the screenplay.

The Ransome trustees were invited to consult on story changes, including shifting the setting from 1929 to 1935 to add the dramatic element of the looming Second World War. Further tweaks to the plot were made to update the characters, and the language of the novel was updated. “The children need to feel accessible to a modern audience,” says Lowthorpe. For example, the character of Susan, played by Orla Hill, is now armed with interests in science and astronomy. But the team was conscious of also staying true to the beloved novel. “There are changes you feel you can’t make to the original,” says BBC Films commissioning executive Joe Oppenheimer.

Once the script was completed, independent producer Nick O’Hagan joined the project, and Lowthorpe was scouted following her work on BBC TV adaptation Cider With Rosie. “Even though Swallows And Amazons was written over 80 years ago, it has a great deal to inspire today’s parents and children. I was drawn to the book’s sense of freedom and daring,” she says of her first choice of feature.

In 2014, the BFI joined the project with finance for development, and HanWay Films came on board as the international sales agent. Further financing came from The Electric Shadow Company and Maiden Investments, which boarded the project alongside Screen Yorkshire. Studiocanal acquired the UK rights.

There was a lengthy auditioning process to cast the film’s four young protagonists, during which more than 800 children were seen. It included a final stage at a local sailing club to make sure the final few would be able to find their sea legs. The team settled on Teddie-Rose Malleson-Allen (who had worked with Lowthorpe on Cider With Rosie), Hill (Song For Marion), along with Dane Hughes and Bobby McCulloch, both of whom are making their screen debuts. They join Rafe Spall, Andrew Scott and Kelly Macdonald in the cast.

Principal photography began in June 2015 and lasted a total of eight weeks. The shoot was almost entirely on location in the Lake District and Yorkshire, including the picturesque hilltop town of Heptonstall near Halifax. It was chosen for its original features — such as stone buildings and cobbled streets — which have been used numerous times, including BBC TV series Happy Valley.

While the book is set entirely in the Lake District in northwest England, to unlock finance from Screen Yorkshire the production had to marry the scenes on the lakes with appropriate locations in the adjacent county roughly 100 miles away. “The heart of the film is on the lakes [and] we had to match those locations with Yorkshire,” explains Barton.

Since much of the landscape is protected by the government body National Trust, the art department, led by production designer Suzie Davies, arrived on set in the early hours to begin the process of covering up all visible modern features that might creep into shot.

Elsewhere, location manager Jethro Ensor was tasked with ensuring the crew and vehicles did not cause damage to the landscape, laying vast lengths of track across the region to allow the production to move freely.

Studiocanal is releasing the film in the UK on August 19. It could be the first in a potential franchise: Harbour Pictures and BBC Films own the rights to a further 11 books in Ransome’s series, and Oppenheimer says BBC Films is looking to increase its production of family films. “We’re keen to keep finding stories that resonate with a family audience,” he says. “They are under-served in this country.”