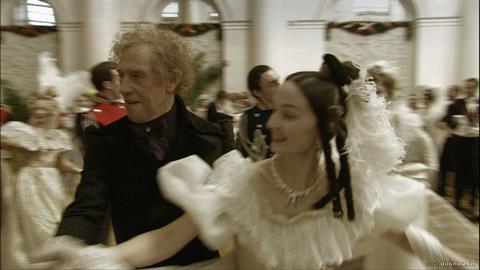 Still stumbling through the murky mists of the past, writer-director Alexander Sokurov follows his impenetrable portraits of Hitler (Moloch) and Lenin (Taurus) with a more wide-ranging gallivant through the legacy of Russia’s imperial glory. Shot in one single take using a HD digital video camera, it is a technical tour de force for cinematographer Tillman Buttner. Sadly, the end result is still ninety minutes of unengaging tedium followed by six minutes of real charm and elegance. It will do nothing to extend the limited audience for Sokurov’s work.

“I open my eyes and see nothing,” is the first line of dialogue and most viewers will sympathise as Buttner’s camera glides through the labyrinthine corridors and chambers of the Hermitage in St Petersburg. A contemporary filmmaker magically transported to a different age, the narrator then encounters the Marquis de Custine (Dreiden), a black-garbed European diplomat from the 19th century who becomes his companion and conspirator as they journey through the tunnels of time.

Along the way, they bump into Peter The Great. “He taught Russians to enjoy themselves,” declares the diplomat. They witness Catherine The Great caught short at the rehearsal of a play, eavesdrop on Nicholas and Alexandra at a family meal and briefly encounter other famous names. “Who was that little man’,” demands the irrepressible diplomat. “Was it Pushkin’” Cultural time-travelling Bill And Ted had much more fun on their excellent adventure and bogus journey, notwithstanding the ever-present Grim Reaper-dude.

Sokurov’s journey is peppered with observations on art and comments from the diplomat who retains a wistful affection for the pomp and circumstance of the Tsars. The filmmaker remains more sceptical over the nostalgic longing that keeps drawing his country back to its past.

Pythoneseque in its mumbled asides and cheerful eccentricity (the diplomat enjoys the odd dance and flutter along a corridor), the film suddenly finds its focus in the dying moments as Sokurov follows hundreds of dancers at the last Great Royal Ball of 1913. Focused, fluid and highly endearing, the screen is filled with wave after wave of pirouetting couples and there is the same palpable sense of an era ending as Luchino Visconti managed to capture in his masterwork Il Gattopardo(The Leopard). It is as if a different filmmaker had taken charge of the production.

When the last waltz has played, the dancers file past the camera. The time travellers make their farewells and Sokurov focuses on the dark, wintry emptiness that would soon engulf much of Russia. If only the rest of the film had shown anything approaching the power, coherence and grace of these final few scenes we might have been talking about a very different and very much better production. The fact that Sokurov is able to create such scenes when he chooses to suggests that his staunchest supporters shouldn’t lose hope that one day he may yet redeem himself in the eyes of his strongest detractors.