Sarajevo: Dane Komljen talks 'All the Cities Of The North'

Bosnian film-maker talks to Screen about his debut feature, which plays at Sarajevo Film Festival. 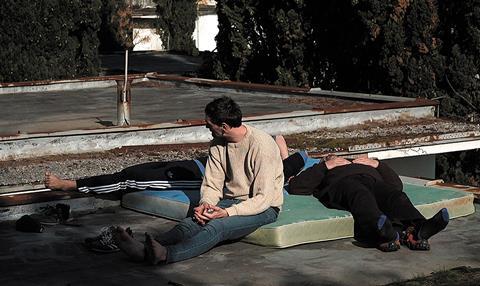 Dane Komljen’s first feature film All the Cities of the North screened out of competition at Sarajevo Film Festival today (Aug 16) following its world premiere in Locarno.

Komljen’s shorts were screened and won awards at Cannes, Locarno, Rotterdam, and FID Marseille, and his feature debut is a challenging and inspiring mix of autobiographical and social, a decidedly modernistic, formally uncompromising piece, set in an impressive, almost dystopian location.

How did you find the setting, what is it exactly and where is it located?

It’s an abandoned hotel complex on the edge of Montenegro, near the border with Albania. The hotel has been privatised and its destruction is already underway. It is at the margins of both space - the state border - and time – the remnants of what used to be Socialist Federal Republic of Yugoslavia.

The hotel that resists being demolished at the beginning of my short Our Body is part of the same complex. Now, only the other half of it remains, a series of rigorously modernist bungalows. The complex is structured as a repetition of one form, a white cube. Each cube carries this one basic form while also containing one noticeable deviation from it – the placement of the stairs, the placement of the windows. A beautiful, open space.

I first encountered these abandoned bungalows during a summer spent camping along the coast with someone I loved back then. When we entered the cubes, we found traces of those who had been there before us – plastic bottles, pillows, shoes. One said ”Maybe we should pitch our tent here”. Another said ”Maybe we shouldn’t leave this place”. This film was a way not to leave.

The film is a mixture of ideas connected to your life, and ideas about society. How do you go about making a film? Is the starting point personal or social?

You always start from an encounter, with a space, a person, an idea.

With this film, I wanted to create an open space of relentless acceptance. It was about the way personal and social coexist, how we link them, how we bond. Our dreams can’t be separated from the way we work together, we live, we move and stand still in broad daylight. It’s part of the same story.

I see so much exclusion in this world. People proclaiming: “This is not what we are, we don’t want to be with you, this is our frontier, the limit.” Building this film was a work of association, figuring out a structure that’s open enough to embed both mythical stories and history of the 20th century, family and friendship, vulnerability and a view of utopia.

You use various approaches, visual styles, off-screen narration that does not directly match the images, and other devices so that the fabric of the film feels very dense.

Yes, it’s very disparate, but it’s also a film in one movement. There is a multitude of sources and approaches, voices and materials, but I wanted to make all of this to flow together, in one go, to coexist.

There is this very tempting modernist idea of starting out from a scratch, an unprecedented newness, a white sheet of paper. All the Cities Of The North is more about figuring out to do with the things that are already there, how to reuse, reshape, revolve and still move somewhere else, how to reorder this intrinsic impurity.

When you meet someone there is a point in this initial moment in which everything seems possible, any of shared, possible futures remains within reach. This film shows two men who have decided to persevere in this utopian moment. The film tries to stretch out the relation as much as possible and see what can fit in. It’s about figuring out how are we together.

In a way, this operation is very logical, it really resembles a walk, moving step by step, adding one element and then another element to the space around the two initially main characters. At one point, back when I was writing, it became inevitable that the making of the film itself should come into view. Cinema as another way of being together, another form of equality. There’s something comforting about the darkness of cinema cancelling out the ways we stand apart from each other while still allowing us to observe and read together, to really be together.

This world’s a shithole. Even if temporary, All the Cities of the North was our shelter.