ScreenTech: The return of film

A resurgence of interest in shooting on film is giving a new lease of life to international film labs. 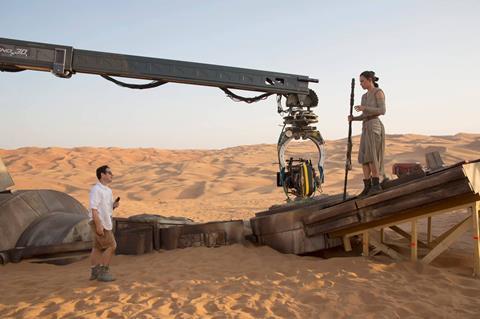 Four years ago, the death of 35mm production appeared imminent. The collapsing demand for film prints and the rapid rise of digital imaging technologies had combined to force Kodak into bankruptcy, and led Technicolor and Deluxe to plot exits from a century of film processing.

Spooling forward, it is clear that predictions of celluloid’s demise were premature. This season’s eclectic awards contenders Carol, Bridge Of Spies, The Hateful Eight, Joy, Black Mass, Son Of Saul, The Big Short and Steve Jobs are all, in whole or in part, originated in 16mm or 35mm. More surprisingly, given their heavy VFX content, major releases Jurassic World, Spectre, Star Wars: The Force Awakens and the forthcoming Batman v Superman: Dawn Of Justice have also originated on film. Films set for release in 2016 include Martin Scorsese’s Silence, Paul Greengrass’s Jason Bourne sequel and the Coen brothers’ Hail Caesar!.

“The larger film emulsion canvas offered by 65mm film creates images of unusual resolution and depth, yet with a natural ‘rolling off’ of highlights, even when digitised and presented later at lower resolutions,” says Mike Brodersen, chief strategy officer at FotoKem, the Los Angeles lab that processed Quentin Tarantino’s The Hateful Eight as well as Danny Boyle’s Steve Jobs.

While the overwhelming majority of studio pictures are shot digitally, attention deserves to be refocused on the survival of film as a tool of choice for film-makers.

“Film was once the capture medium and now it is a capture medium among many others,” says Christian Richter, Kodak’s business manager for Europe, Russia and India. “It has a very stable fanbase of film-makers who still see it as the gold standard to tell their stories.”

The world’s only 35mm film manufacturer has $50m of fixed costs but the deal was enough for Andrew Evenski, Kodak’s president of entertainment and commercial, to predict the outfit would break even in 2016 and eventually return to profit.

“This is the plan and this expectation is still true, should demand for camera negative, intermediate stock for post-production, and archival and print film continue,” says Richter.

Kodak also sought to extend film-stock purchase to independent studios. In May, it introduced a programme targeting UK independents with a budget package including camera rental, stock, processing and transfer services. Together this has boosted the fortunes of the UK’s two film-processing facilities. When Technicolor and Deluxe folded their UK labs in 2012, there was a fear this might affect decisions to locate international productions to the territory.

Nigel Horn’s iDailies acquired the redundant processing equipment from Deluxe and Technicolor in 2013 and signed a deal with Deluxe-owned finishing shop Co3 to continue support for 16mm and 35mm.

“We’ve handled every studio project shot on film in the UK since [Deluxe and Technicolor closed],” says Horn. Most high-profile of all is Star Wars: The Force Awakens, processed entirely at iDailies (apart from 65mm sequences that were shipped back to Los Angeles) with films transfers at Co3 London and the grade by Co3 in Los Angeles.

With branches in Romania and Greece, competitor Cinelab London opened in 2013 and processed Suffragette’s 16mm recording in 2014. In 2015, Cinelab handled James Marsh’s untitled project about amateur yachtsman Donald Crowhurst, Gurinder Chadha’s Viceroy’s House and James Gray’s Lost City Of Z. The business plan for both labs is predicated on the gradual demise of dailies, with a future trained on print archive services.

“We thought we could only rely on [shooting] film for another two years, but what has been a surprise is how busy we’ve been over the last six months,” says Adrian Bull, owner and chief technology office of Cinelab. “From all our conversations, next year will be busier.”

Both labs are capable of processing 100,000 feet per eight-hour day — comfortably enough to deal with three major features simultaneously. “If twice as many [films] are shot on film next year, the UK might have a problem. But realistically we still have the capacity to handle that volume by increasing shifts,” says Bull.

“You can’t make a business from processing on its own,” he adds. “It is about providing services that wrap around a production, from sound-synced editorial and scans of conformed material to film deliverables like DCPs.”

While photochemical processing may be a cottage industry in comparison to its previous monopoly, it is sustaining a number of businesses across Europe. German labs include TF CineNova and Andec Filmtechnik and, in France, Film Factory, Ymagis-owned Eclair Group and Digimage. There are further labs in Belgium, Sweden, Switzerland, Hungary and Romania.

The perception that digital recording is more economical than 16mm and 35mm still persists, but the argument has been largely discredited. While the initial outlay for film cameras and stock may outweigh that of digital media, the overall cost is balanced by the need to process and store digital data. This can lead to more footage to review in both the quality control, dailies review and editorial phases.

“In digital you shoot more footage and you do more data transfers,” says cinematographer Edward Lachman, an Oscar and Bafta nominee for Carol. “Every time I’ve done a cost breakdown between film and digital, film has come out cheaper.”

For projects with shoot ratios as high as 100:1, executives might calculate a high percentage of wasted film stock and urge a digital route, although the counter argument is that this stockpiles terabytes of unused data in post while negative running through a camera tends towards better discipline on set.

In any case, as soon as celluloid is recorded on set, the dailies are scanned to a digital intermediate and the post-production route is then the same as any digital origination. With costs being equal, more studios are green-lighting 35mm for VFX-heavy features such as Mission: Impossible — Rogue Nation.

None of this would matter without the continued preference expressed by directors in collaboration with their cinematographers for achieving a distinctive look.

“There is a resurgence in film, certainly in the heart of many who fear that it will disappear in the future,” says Robert Richardson, who photographed The Hateful Eight. “There is a softness to the manner in which film records skin values.”

Yet for period thriller Live By Night, Richardson and director Ben Affleck opted for digital. “We made a series of tests comparing 35mm and the ARRI 65 and the decision was based on a look we created with [colourist] Yvan Lucas,” he explains. “Digital was right for this particular aesthetic.”

Nonetheless the choice is not always a free one, says John Seale, who shot Mad Max: Fury Road digitally. “Studios feel they will have more control of the image in post if they demand a digital negative.”

Richardson agrees: “Ideally the choice to shoot film or digital should be a creative one, but recently there’s been a greater degree of pressure from the financial end to shoot digitally. There is no question that cinematographers and directors on lower-budget films will find it harder to shoot on 35mm.”

Most film-makers do not view digital or film as better than the other, but are adamant that they want to see film survive in order to be able to craft a story with the most appropriate material.

“Even today’s 35mm stock has become so grainless it looks digital,” contends Lachman. “Not all images or stories should be told in photorealism. Certain stories lend themselves to digital work and some lend themselves to the impressionism of Super 16.”

Todd Haynes’ Carol was one of the final projects to use the New York Film Lab, a joint venture between Deluxe and Technicolor that closed at the end of 2014. “They had $250,000 of equipment that was simply going to be thrown away,” says Carol cinematographer Edward Lachman. “I enquired of the general manager if he could let me have it. So now I’m in possession of the only major lab on the east coast and I’m waiting for someone to come to their senses and take it out of storage.”

Lachman claims eight productions proposing to shoot film in New York are stuck without a lab and will have to revert to FotoKem in Los Angeles or Cinefilm in Atlanta, or be forced to shoot digitally.

“There is a resurgence of interest in film but, in order to save film as a tool for the future, it’s not enough to simply create with it,” urges Lachman. “There has to be an infrastructure to support it.”