From the Berlin set of Jesse Owens story Race, Martin Blaney talks to the producers about their approach to the defining story of the 1936 Olympics. 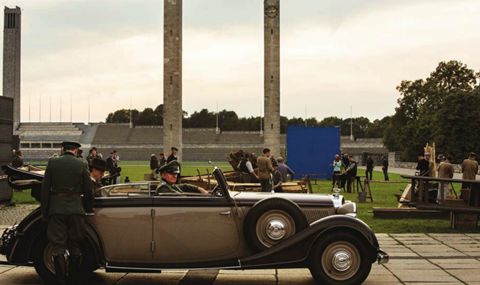 The idea for a film about Jesse Owens was brought to me about four years ago by Luc Dayan of ID+, who is from the sports business rather than the film industry,” recalls producer Jean-Charles Lévy of Forecast Pictures.

Initially, film-maker Pan Nalin was hired to research the background for a story that would have followed Owens and Hitler.

“But then we decided that what really interested us was Jesse,” Lévy explains. “So we spent the last three years with Stephen [Hopkins] on developing the story.” Lévy had previously worked with Hopkins on his 2000 thriller Under Suspicion.

At the time, there was a rival US project about Owens to star Anthony Mackie also being developed. “Anthony is a good actor, but he is too old to play Jesse [at this particular stage of his life],” Lévy remarks. “Stephen and I both wanted to have a real 21-year-old as Owens who is suddenly confronted with all of this fame and other things at the 1936 Olympics in Berlin.”

For the financing of the film’s $31.6m budget Lévy and his partners decided not to be dependent on the US, structuring it instead as a Germany-Canada co-production with 35% of the budget from Germany and 65% from Canada. In addition, Lévy and Dayan joined forces with producers Karsten Brünig and Thierry Potok to set up the Berlin-based company Trinity Race GmbH.

“Originally, it had been thought Trinity Race would be a single purpose company for Race,” Brünig says. “But now we are all at the stage where we want to continue producing together for the international market.”

While Germany’s DFFF incentive kicks in automatically as the project fulfilled all of the criteria such as the cultural test, Lévy regrets that “we had to beg in order to get the funding from Medienboard Berlin-Brandenburg”.

He suggests the award of just $253,000 (€200,000) was particularly disappointing “especially when you have a film that takes place in Berlin and given what we’re doing in the [Olympic] Stadium”.

“It’s completely crazy because we had almost the same thing in Canada,” Lévy continues. “We qualify for the tax credits but, due to some internal politics, Telefilm Canada didn’t fund the film. Instead, they gave a loan to the Canadian producers so that they could be involved.”

‘There will be different approaches for marketing to American and European audiences. In the US, it’s a rags-to-riches story’

Principal photography began in Montreal on July 24 and continued for four weeks at locations in Berlin before wrapping on October 5. Post-production and extensive CGI work will be undertaken back in Montreal.

Meanwhile, sales company Mister Smith Entertainment has sold every territory except for the UK, Japan, Australia and France (as of press time), with Focus Features planning the US release for April 8, 2016.

This is timed just ahead of the 80th anniversary of the Berlin Olympics and could be part of the mother company NBCUniversal’s overall strategy for its coverage of the Rio Olympics that summer.

SquareOne Entertainment’s Al Munteanu, who will be distributing the film in Germany, also worked with Lévy on the development of the screenplay and tossed around casting ideas as well as investing in Race as an equity partner.

“The fact we have a US distributor on board so early means we have Focus taking the lead on the timing of the release, so we would be likely to go day and date with them,” Munteanu says.

“Our marketing strategy in Germany will be based on the Olympic Games in Berlin in 1936 and how Owens’ triumphs upstaged Hitler,” Munteanu explains. “There will be a different approach for marketing to an American audience as opposed to a European one — in the US, it’s more of a rags-to-riches story.”