From the London set of Urban Hymn, Adam Woodard talks to writer Nick Moorcroft and director Michael Caton-Jones about the drama. 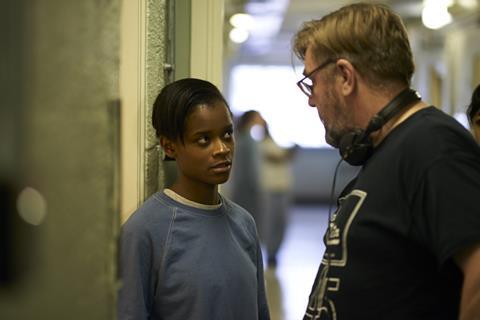 You enter the old iron gates of a facility that once used to be a prison, POW camp and mental health facility and immediately feel as if you’re beginning a life sentence.

Though it hasn’t been functional for years, the old buildings in London’s Richmond serve as a film set for director Michael Caton-Jones’ latest venture, Urban Hymn.

After eight years of being passed over and thrown in the metaphorical draw, writer Nick Moorcroft’s (St. Trinians) drama about the relationship between a young female offender who possesses a remarkable voice and her determined social worker finally caught on in February this year. Six months later, after almost a decade of waiting, the writer’s semi-autobiographical story came to life on camera.

“I’ve always wanted to explore, as a storyteller, the importance of the role of the mother in a child’s life, that unconditional love a kid needs to overcome the obstacles that are presented through adolescence,” said Moorcroft.

“I drew on personal experiences and wrote a story ostensibly about me and my mum.”

Moorcroft’s script was the key to bringing in Caton-Jones, the seasoned director behind Memphis Belle, This Boy’s Life and The Jackal.

“I didn’t feel the need to jump back in the saddle until there was something I really wanted to do,” said Caton-Jones, whose last film was 2006’s Basic Instinct 2.

“This was the first (film) that I found and I thought it’ll be good and challenging. It was the quality of the material that brought me in.”

The film, now in post-production, wrapped shooting Oct 22 after a rigorous 28-day schedule, filming upwards of 13 scenes a day.

Moorcroft said: “It’s an incredibly ambitious film for the budget and the time scale…but that’s a testament to Michael’s experience and determination. The big thing for Michael was he needed actors who could deliver and fall into the schedule. That’s what he’s got.”

“The good thing (about the film) was we got young actors busting with keenness to the play the part. They were completely connected,” said Caton-Jones, who praised his cast and crew for their hard work and determination throughout the shoot.

“We were really inspired by Billy’s initiative, Jail Guitar Doors, which goes around British prisons and donates guitars in the hopes that music becomes a form of rehabilitation,” explained Moorcroft, who wrote Bragg into the script before even asking him. “We felt there was a synchronicity between the initiative and the message and theme of the film.”

“The first inspiration for the initiative was to try and work with people on the margins of society. That’s how you change the world,” said Bragg, who visited a prison the day before his shoot. “As a musician you know that music can help to transcend your surroundings and it makes sense to do this.”

The ability for music to transcend and be a release is an overarching theme for the film, and one that everyone can relate to.

“Music to Jamie (the film’s lead role) is a form of escapism. From a young age, she’s been influenced by music and ultimately, music and certain people make her grow,” said Screen’s Star of Tomorrow Letitia Wright. “When she sings and when she’s listening to music it’s a way for her to let go and forget about everything that’s happened to her.”

Moorcroft talked about how he wanted to write “a redemptive story that gave the audience hope” and how his co-producer Meg Leonard was inspired by Camila Batmanghelidjh’s book Shattered Lives. Batmanghelidjh runs a major organization called Kids Company that helps struggling youth, like the film’s central protagonists Jamie and LeAnne.

It was by “pure chance,” says Moorcraft, that the project finally got underway. He was having a conversation with Eclipse Films’ John Sachs about musically driven film, and told Sachs about his script.

“We looked at the script and thought it was something special,” said Sachs, referring to his production partners at Eclipse Andy Berg and Neil Chordia.

Moorcroft was forced to retool his original script multiple times. Ultimately, he decided to use the 2011 UK summer riots as the backdrop of the film. “The riots were the catalyst that story always needed. Everything playing out in the national press really resonated with the script,” said Moorcroft.

Moorcroft and Leonard revealed that Eclipse and Powderkeg are working together on a new film scheduled for production next year.

Urban Hymn is a story of hope. It’s the product of a passionate writer, a dedicated director and a motivated team of cast and crew. Before leaving set, Screen asked Caton-Jones how he thought the film would be received.

His reply: “Reception, I don’t know, and I don’t actually care. I try to control what I can control, if you can’t control it, don’t kill yourself about it. All I can do is make it as good as I can and hope.”