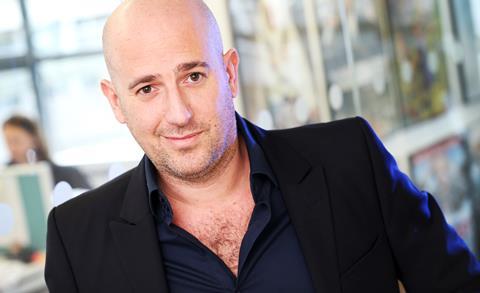 Signature Entertainment has come a long way in five years. Since launching the company on a budget of $19,000 (£12,000), CEO Marc Goldberg - son of industry veteran Warren Goldberg - has seen his company grow to 15 staff, an office on London’s Charlotte Street and a slate of more than 80 films.

Earlier this year the company secured investment from David Sullivan, chairman of West Ham United Football Club, after garnering interest from US and German firms and the outfit now has one eye on the theatrical market.

CEO Marc Goldberg spoke with Screen about the company and its future plans.

How are things at Signature?

The company is continuing to grow. I can feel it on a daily basis with the results that we’re seeing and the relationships that we’ve built.

When I started many people said: “What are you doing starting a film distribution company in a delicate, fragile place where lots of companies are finding it very difficult.”

But looking back at it, that was probably to my benefit.

Before Signature I worked for nine years as a sales director selling DVDs on the road for small labels and I think that my background in real hard-edged, down and dirty sales was, and has been, a huge reason why we have been successful.

We’ve approached the business from the bottom line, thinking ‘Is this going to work? Is this going make us money?’

You’ve recently had investment from West Ham co-chairman David Sullivan [understood to be a 20-30% minority share]. How is the company monetized?

Last summer, I had approaches from a US distributor and a big German distributor to buy the company. It was a great experience and flattering but ultimately the deal just didn’t feel right on either part. And I was enjoying what I was doing too much.

We were kind of ripe for the picking, so I understood why they came along. I drove a hard bargain. It didn’t work, it just didn’t pan out. But it was certainly for the better.

It got me to the point towards the end of last year where it was much more about finding an individual or a partner or a company or an investment vehicle who could take a piece of the company and allow me and my team to stay in control.

That opportunity might have come through an individual in the US. But again, we couldn’t strike the right deal. And then the opportunity came along with David Sullivan. I had met him because we took the distribution rights for Rise of the Krays and Fall of the Krays, which he had invested in.

What’s been your best-performing film to date?

In terms of revenue that would be Predestination. It has been an outstanding success.

How many units did you sell?

It’s the premium VOD and day and date model in the UK that I am aggressively going after.

Who are your key online partners?

We work with all the digital platforms. Around 14 of them. In 2014, we released just over 80 films, and we sold just over 80% of those to Sky, Netflix and Amazon.

There’s no-one now that we’re not dealing with directly. Between sales director Gemma Stockley, director of TV and digital John Bourdillon and the sales team, it’s a regular flow.

You can see examples of opportunities in the digital world that can be switched on so quickly that just can’t happen in the physical world.

Is 80 films a year sustainable?

Yes. We should do about 60-70 this year. Next year the plan is to do more than one hundred.

And the key relationships on the retail side?

All of them. The four supermarkets, HMV and Amazon. Tesco has the largest market share among supermarkets so of course they are important but they all are.

Today physical makes up about 50% of our business. The supermarkets are probably worth about 90% of that 50%.

Is there a special relationship with Tesco?

My background in sales meant I had good relationships with all retailers. When we started out I briefly had an exclusive deal with Tesco who connected with my product. That deal helped me kick off the business and made sense at the time. But we have no special deals with any retailer now. We deal with all retailers and they all enjoy working with us.

To what extent is theatrical on your mind?

Our understanding and desire is not to lay out an amount of money on an MG and P&A and sit and wait for eighteen months before we start actually making any money, and hope and pray in that time.

Our idea is of a very clear model where we can start earning a profit on a title within as short a time as possible.

But to answer your question: yes, we do have a desire to do theatrical.

But to me the middle ground, that middle ground of 20 to 100-screen releasing in a traditional way, where you go out to all exhibitors and ask them to choose and then wait until the week before for them to let you know whether or not they’re going to screen your film, and then you’ve got to decide how much P&A…it’s just not a model that works.

The only real model that works as far as I’m concerned is to do it on a big scale, and to go out and go really wide and spend a proper amount of P&A, a seven figure budget P&A.

We are in negotiations on three films on which to do that in 2016.

So they would go out on more than 100 screens?

Way beyond. 200 plus. I’m not sitting here saying we’re going to be doing 10, 15 of those a year this year but in three or four years that might be where we’re at.

I don’t want to be in this business to hope that that film is going to be the one. That’s not how I want to enter each project. It shouldn’t really be part of the team’s thoughts ‘is this going to be the one that breaks us, or makes us.’ Because it can actually very easily break you. I’ve seen it. People have worked for companies like where that was their philosophy.

So how do you avoid becoming that distributor that overreaches and goes under?

You can’t sit here and say ‘well, I’ve got this film, and it’s not going to be like that one,’ because that’s the beauty of this business - it’s subjective. No one really knows. But I look at the slate of some companies that have failed and the product that they acquired and released and the money they spent, and I can hand on heart say that I would not have made any of those moves.

Outside of the large indies would you say that Signature is the most savvy and commercially successful distributor on the home entertainment front in the UK?

Yes. I’d say that we are probably more so than all those companies. And I’m not saying that with arrogance.

I don’t consider Entertainment One, StudioCanal and Lionsgate to be large independents. They are global organisations. They are controlled by the stock exchange or huge TV companies or big American companies.

That’s not to say that we wouldn’t want to develop into one of those companies one day. But from a true independent perspective, I don’t think there’s anyone who’s been able to create the spark that we’ve created over the last four years, particularly in the last year.

How many are you at the company now?

There are fifteen of us.

Do you see that number rising?

Yeah, I think by the end of the year, there’ll probably be about eighteen, nineteen people.

We’ve picked up William Monahan’s thriller Mojave, which is a really interesting film.  It has some really strong star power: Oscar Isaac, Garrett Hedlund and a smaller part for Mark Wahlberg. It’s a dark thriller set in the desert.

On the other side of the scale, we’ve picked up Dragon Blade, the Jackie Chan, John Cusack, Adrien Brody historical action epic, which from a premium VOD perspective is a perfect title.

We have three Nicolas Cage movies next year, so we’re very much in the Nic Cage business. His appeal in the UK continues.

At Christmas we should have our biggest title to date in terms of sales: Rise of the Foot Soldier II. The first one sold over a million and a half DVDs in the UK, and is our most successful British hooligan title on digital platforms to date. I had the opportunity to help co-finance that one.

How big could your returns be on that?

Over time, you’d hope to be making well into the seven digits over a two or three year period.

Are there any other partnerships in the works?

There are a couple of production companies in the US with whom we are now quite far down the line in terms of setting up output deals. These should be big moves for us.