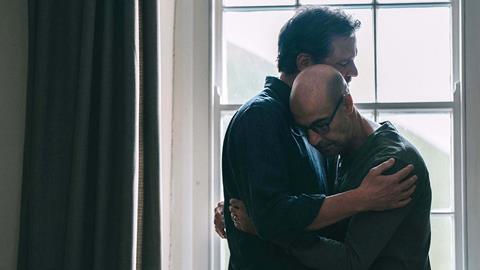 When Stanley Tucci received the Supernova screenplay, he not only signed on — he also ensured a greenlight by persuading pal Colin Firth to star opposite him. Screen talks to the actor about love, life and mortality

Stanley Tucci was not afraid to confront his own mortality while playing Tusker, a man battling early-onset dementia, in Harry Macqueen’s Supernova. The topic was already on the actor’s mind.

“I come from a southern Italian family, we only ever think about death,” he says, smiling over a Zoom call, but also totally serious. “Death is always part of the daily conversation.”

Loss and grief are just two themes of the film, which also has its joyful moments. Supernova follows a longtime couple, novelist Tusker and musician Sam (played by Colin Firth), who are on a road trip through northern England’s scenic Lake District as they confront a challenging future because of Tusker’s worsening illness.

Tucci and Firth have been friends in real life for 20 years. When Tucci was sent Macqueen’s script for Supernova, he loved it so much he immediately, and clandestinely, shared it with Firth in the hope they could star together. Of course, Macqueen — an actor and filmmaker who previously made 2014 microbudget feature Hinterland, starring himself — was thrilled that two actors of this calibre wanted to bring his characters to life.

Initially, Tucci was considered for the role of Sam, and Firth would play Tusker. “I kept looking at it, thinking, ‘I don’t know if it feels right,’ and then Colin said, ‘I think we should switch roles.’ And I said, ‘I’m thinking the same thing!’ It just felt more comfortable that I was Tusker, there was something rhythmically about Sam that didn’t fit as well for me. And Tusker seemed to lend himself more to an American accent.”

Macqueen had encouraged them to try each side, and the experience of playing around with each character “really helps you”, says Tucci.

He was struck by the simplistic delicacy of Macqueen’s script. “I just thought it was beautiful, and then I watched Hinterland, which was gorgeous. And then I met Harry and he’s very much like the movie itself — understated and intelligent.”

Two decades of friendship gave the actors some obvious insights and shortcuts. “When you’ve been really good friends with someone and you’ve been through a lot of hard times together, helping each other, and also having wonderful times together, it’s like you’re as close as you are with your spouse,” Tucci says, before adding with a laugh, “with the exception of the lovemaking.”

Macqueen had done extensive research with families who have experienced early-onset dementia, and Tucci respected that in the script. The actor also met with an experienced doctor to talk about the condition “and watched a lot of documentaries and read about it. It’s incredibly moving and also very difficult to watch. It’s incredibly difficult for the people who have it, and for the people who are helping them through.”

The film’s Lake District setting made for a suitably scenic location shoot (albeit a wet one — Tucci says it rained every day of production). It was the actor’s first time visiting the region. “I just could not believe that landscape. As we moved around from location to location, it was absolutely stunning.”

Tucci and Firth lived in simple holi­day cottages while shooting the film, and Firth would come over to Tucci’s cottage every night after shooting as Tucci cooked dinner (“He cooks too but I guess maybe I’m a better cook,” Tucci says when pushed). On nights when there was not an early call time, there might have been a cocktail as well (Tucci went viral during 2020’s first lockdown for his online mixology tutorials). 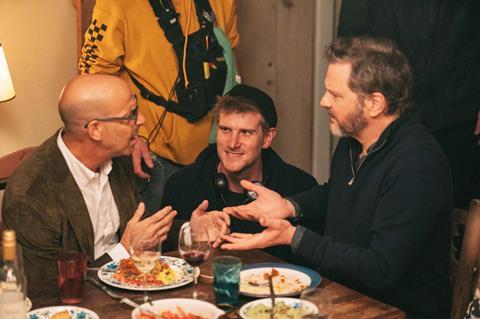 Working with a director who had made only one microbudget feature was not a worry for Tucci, himself a director of features including Big Night and Final Portrait. “I have made so many independent movies as an actor. I trusted him.

“You never know, you can work with some incredibly accomplished, successful directors, and that can be a disaster,” he laughs.

“Harry’s direction on set was very minimal. He didn’t do a lot of takes,” adds Tucci, noting that it was his first film with veteran director of photography Dick Pope, a two-time Oscar nominee for Mr. Turner and The Illusionist. “It is shot very simply — the camera doesn’t move that much. And yet the composition is quite beautiful. Harry is creating a Bergmanesque movie.”

In the pandemic year of 2020, Tucci was able to keep working on his CNN documentary series Searching For Italy about his culinary adventures in that country; he also finished shooting Alejandro Amenabar’s treasure-hunt miniseries La Fortuna for AMC Studios and Movistar Plus. Next he will shoot Anthony and Joe Russo’s series Citadel, also starring Richard Madden and Priyanka Chopra Jonas, for Amazon. In addition to shaking those cocktails, he also spent 2020 finishing a memoir about his life through food, which should be published later in 2021.

With the world still turned upside down, Tucci is excited to share the life‑affirming story of Supernova, which is released in the US by Bleecker Street and in the UK by Studiocanal. He wants audiences to understand the film is not obsessed with illness and death. “Look at the characters and they are sad only sometimes, they are also joking around a lot. That’s what life is — if you do one too much or the other too much, the film doesn’t work.”