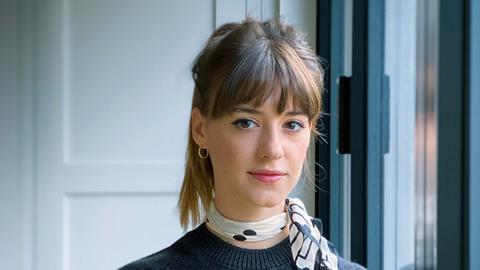 Daisy Edgar-Jones was shooting the Fox/Canal+ miniseries War Of The Worlds in Cardiff when she received the call to submit a self-tape for the role of Marianne Sheridan in Element Pictures’ Normal People.

“It turned out that one of our quite difficult scenes ran over so I had to do [the tape] at lunchtime,” Edgar-Jones recalls. “I’d spent most of the morning wailing, covered in fake blood.”

The tape landed her a spot in the final pool of actresses performing chemistry reads with Paul Mescal in Dublin. “That was honestly one of the scariest days of my life,” she says. “I was so full of adrenaline.”

The untypically long audition — “It felt like an eternity, but it was probably 30 or 40 minutes” — went well, and three days later Edgar-Jones heard she had secured the role. “Three torturous days,” she recalls. “It was quite strange. I woke up thinking about it. I just couldn’t stop thinking about it because I wanted it so much.”

Unlike Mescal, whose previous experience was essentially on stage, the 22-year-old north Londoner was already a seasoned screen actress, with credits including four seasons of TV’s Cold Feet, episodes of Gentleman Jack and Silent Witness, and 2018 UK indie film Pond Life, which is adapted from Richard Cameron’s stage play.

Growing up an only child with a TV executive father and a mother who had put on hold her career as a film and television editor, Edgar-Jones developed an early passion for drama, performing in school plays from the age of 10, and spending her teenage summers with the National Youth Theatre. “I always just enjoyed that process of pretending to be someone else and trying to think about their perspective on life and the way they think about things,” she says.

Normal People has taken Edgar-Jones to a new stage in her career, including scripts now arriving with firm offers attached (“That’s a very new thing”). Announced in September is the lead in Legendary’s Fresh, described as a “social thriller”, written by Lauryn Kahn, directed by Mimi Cave and produced by Adam McKay and Kevin Messick.