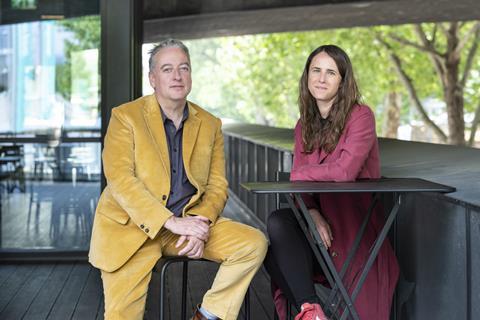 Chloë Thomson: What made you want to be a cinematographer?

Seamus McGarvey: Just the love of looking. I had a stills camera that I used to take into the local chemist for processing. The magic of seeing what you thought you were taking altered by the process was something that intrigued me from the very start. It’s not a replication of reality; a shift happens when you look through a lens and take a photograph. Gradually I developed an interest in processing, and being in touch with the magic of that transformation. There’s a chemical change that happens when you project an image onto a piece of paper in negative, and then watch that appear as a positive. It was like the tangibility of paint in a physical process. That’s something I miss in the digital realm — that tactile aspect of stills photography and film photography, where you can open up the side of the camera and smell the hot celluloid.

CT: And do you paint or draw?

SM: I can’t! I’m a terrible artist in the conventional sense. But I do think I’m an artist. People are ashamed of saying it, certainly in Hollywood. For a cinematographer to announce in an interview that they are an artist would send shivers down an executive’s spine. But art is the cornerstone of what we do. Cinematographers are blessed with a distinct way of looking. It’s about taking your own personality, your own life, and letting that enhance your observation. That’s the extraordinary thing about being a cinematographer — to render the everyday epic for an audience. And what a privilege we have, to be able to look with a quizzical gaze, to render the world slightly askew.

CT: You have a wonderful mix of projects, from independent arthouse films to big-budget, VFX-heavy studio projects such as The Avengers (2010) and Godzilla (2014). How do you find a balance?

SM: If I was very rich, I’d do independent films all the time. I love big-budget films but they are slightly restricting in terms of creativity. A daring perspective — darkness, radicalism in framing, the mise-en-scene being adjusted in a way that’s not usual — can terrify some producers. But cinematography, filmmaking, is such a young art that it’s actually incumbent on us to be daring. I’m telling myself this, not you, because I’m guilty of the conservative eye at times, when I thought maybe a more vaulting perspective wouldn’t be welcome. I’m an essentially cautious person, too, but in independent cinema I find a freedom that I really cherish.

CT: How do you deal with differences of opinion or egos when you’re working on something with a huge budget?

SM: I would say that 60% of our job is cinematography and 40% is diplomacy. You have to watch people, move with people, be elastic. You can’t be absolutely steadfast in your perspective on things. If we just did what we wanted, films would be such flatulent, self-serving messes of pictorialism. We have to be conscious that it’s a team effort, and you have to be a team player. But at the same time you mustn’t lose your voice. It’s a tricky balance between sure-footedness and creative drive, as well as acknowledging the fact we all have to sway a little bit within the bigger picture.

CT: How do you make sure you keep your vision intact?

SM: By keeping your head. Preserving your vision within the hubbub is a great attribute. It’s about not focusing on the voices, but reading the script, understanding it and communicating that to the people you’re working with — your grip, your gaffer. It’s about knowing how to communicate the picture in your head to a variety of people. It goes beyond having sensitivity to light and lenses, to being technically adroit. It’s about being able to diplomatically communicate in a crystal-clear way, because it has to happen really fast.

CT: Do you ever get onto a set and not have that clear picture in your head?

SM Yes, but that terror is part and parcel of the art. The terror of not knowing what you’re going to do actually forges imagination. It forges creative, improvisational thinking. It’s the spark you’re trying to light in the here and now. Anything that’s overthought or pre-planned is always the asphyxiation of imagination. Anything that’s worked out too far in advance is airless and lifeless. The terror of not knowing is actually the little sand in the oyster. It’s having the confidence but also the fear — the art flows from those emotions.

CT: When you walk onto a set, what is your thought process in terms of how you’re going to approach the scene?

SM: You arrive at a set on the morning of shooting, and you see the trucks and you’re like, “Oh my god, it’s so expensive! Look at all the people!” It’s like going into the rings of hell. Then you get into the inner sanctum and it’s a silent place of contemplation, particularly when the clapperboard goes. And you’ve just got to trust your imagination. You’re there because people have seen work that you’ve done that is singular, and trust that will come out. Sometimes it doesn’t come right away, but don’t be afraid to let it percolate.

CT: Do you like to prep with the director, the designer?

SM: Oh, I love to prep. Storyboards, pre-viz on the big action stuff is useful. I like planning stuff that’s technical. If there’s a stunt to be done, it’s really important to get things locked down from a safety point of view as much as anything else. There are other things, however, for which you have to be there on a longer lens, observing things, being sensitive to the moment — if you work with children, for example. That’s when I get the goose-pimples, when you’re seeing something through your camera and you know it’s amazing. It’s a precious moment in 24 frames a second — the performance, the setting, the drama of light. It’s captured, engraved for generations. That is at the very centre of our art form, this emblazoning of the human experience on the screen for others to interpret as they wish.

CT: Where do you get your inspiration?

SM: Real life. As a cinematographer, I love architecture and setting shots, but there’s nothing better than looking into somebody’s eyes through a lens. And the beauty, the ugliness, the fear, the life in people, from young to old, is something I get such inspiration from. Sound is so important, and I love sound, but we’re picture people. I love what a camera does, how it illuminates humans to other humans. There’s nothing better than that, when you see something and your heart beats twice as fast.