Thai cave rescue: the challenge of films based on real and recent events 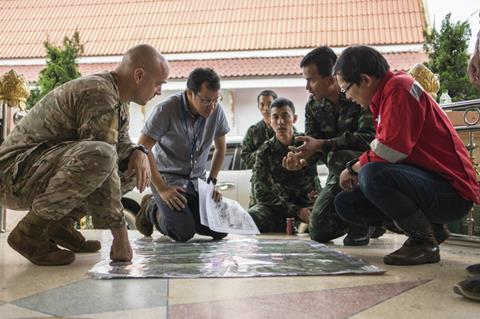 Rescue workers gather around a map

Hollywood has wasted no time in jumping on the rescue story of a team of Thai footballers from the chambers of a cave where they survived for more than two weeks, after a rainy season downpour trapped them on June 23.

Following a successful rescue mission, conducted with the help of the Thai Navy SEALs, at least five film projects about this riveting story are now in the works according to the Thai government.

Aged 11 to 16, the boys and their 25-year-old coach lived on water dripping from stalactites, as they failed to dig their way out of the flooded Tham Luang caves. One SEAL died in the rescue process.

But what challenges and obstacles might the filmmakers face in telling this true story, involving real-life people, most of them minors, and what can be done to ease the process?

Pure Flix, a Christian entertainment studio, was the first to announce it was seeking movie rights, after managing partner and CEO, Michael Scott, travelled to the scene. A second project is in the works at Ivanhoe Pictures. John M. Chu is directing.

’Nobody has the rights to monopolise facts or information’

According to Dale Cohen, director of the Documentary Film Legal Clinic at UCLA School of Law, filmmakers, like journalists, have a right to report on newsworthy people and incidents.

“Nobody has the rights to monopolise facts or information. That’s newsgathering,” he says. “But there are definitely potential issues,” he says.

“People involved in historical newsworthy events can’t say, ‘you can’t report on me’. Kids do have more rights. But I don’t believe there is any legal reason why the kids could not be named. The fact it was so newsworthy means newsgatherers and documentarians can name them. Some choose not to. The law is probably no different for a feature film.”

Cohen says while it has become common practice to strike a deal with living subjects of films, among the filmmaking community in Los Angeles, it isn’t a legal requirement. There are also some differences in how these entities approach the situation.

“News organisations often won’t pay money to people, but film companies can give some sort of compensation for rights, interviews, other materials or access to places or people,” he says.

He adds: “The reason most of these studios and filmmakers agree to sign something is that it gives them better access and protects them in view of possible privacy or defamation claims. “For a studio to spend money on Thai kids is a small price.

Where filmmakers can run into trouble is if they cross the line with privacy standards, or defamation. “In the privacy context, the standard under American law is, have you revealed something not in the public purview that a reasonable person would think is unreasonable?” he says.

“If it’s newsworthy you can’t stop a project under American law,” says Cohen. “Under the First Amendment you can’t prevent people telling newsworthy stories. I am going to guess that these filmmakers will get the rights first. There are already deals happening to get the Navy’s permission.”

John Penotti, president of Ivanhoe Pictures, one of the production companies working on a film version of the Thai cave rescue, is one of those understood to be trying to seal some deals.

“Like so many people across the planet, we are touched and inspired by the miraculous rescue of these 13 individuals,” said Penotti in an email to ScreenDaily.

“The extraordinary collaborative rescue efforts of the Thai Government, and the stunning bravery of these children, their coach and the Thai Seals, is a story we would feel honoured to bring to audiences. We are advancing our conversations with Thai Government Officials so that we may be best able to portray these events as accurately as possible.”

Is the situation different elsewhere? Consider the Netflix TV series The Crown, about the life of Queen Elizabeth II, or even some of Oliver Stone’s films.

’In Britain if you are talking about newsworthy and current people, it’s fair game’

“I am strictly talking about American law, but I would think it is true in Britain that if you are talking about newsworthy and current people, it’s fair game because it is important for the world,” says Cohen. “If they tell the story reasonably or accurately, it is okay. The press writes about the Queen everyday and doesn’t get her permission. Oliver Stone is looking at newsworthy events.”

Some cases do end up in court, however. The Hurt Locker is one example. Sgt. Jeffrey Sarver, an Iraq war vet, lost a case in 2016 against the filmmakers when he claimed he inspired a character in Kathryn Bigelow’s film. “The court strongly rejected that claim and said he was involved in newsworthy stories so the media had a right to tell his story,” says Cohen.

Actress Olivia de Havilland had a lawsuit thrown out by California’s highest court last week over her depiction in FX’s Feud: Bette and Joan. The creators were protected by the First Amendment. Still, “The law isn’t always clean cut,” says Cohen.

How do filmmakers approach the situation?

Yaniv Rokah’s documentary film Queen Mimi told the story of a homeless woman living in a laundrette in Santa Monica. His next subject is filmmaker Nina Menkes.

“The first challenge is to win the trust of the person you want to film,” Rokah says. “The second is that sometimes subjects also want to direct the film and control their story. The third challenge is legal, because every live person featured in your film must sign a release form. Although most people will sign the release form right away, some will use their leverage to demand something in return for signing the release or even refuse to sign.”