Italy’s Filippo Scotti is not only front and centre in Paolo Sorrentino’s The Hand Of God — but is playing the director himself. 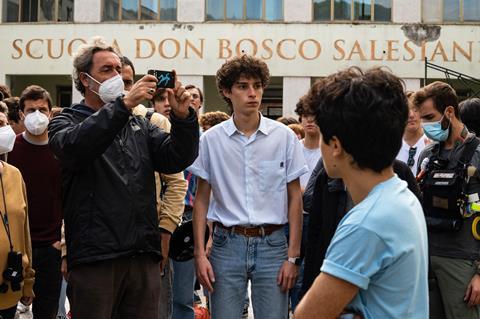 Most young actors near the start of their career would have turned cartwheels on finding out they had landed the lead role in a Paolo Sorrentino film. Not so Filippo Scotti. The day after being told the part of Fabietto in The Hand Of God was his, Scotti asked the feted Italian director whether he was sure he had made the right choice in casting him. “It was as if I’d been so hungry to land the role,” the now 21-year-old recalls, “that it was only afterwards I started to worry about the difficulties and responsibilities… and I kind of froze.”

The pressure was not only connected with the fact Scotti’s career had hitherto consisted mainly of youth theatre, appearances in a few short films and a mid-tier role in Italian Netflix historical fantasy series Luna Nera. It also had to do with the part Sorrentino had asked him to play: that of the director himself, aged 17.

Released by Netflix worldwide on December 15 after premiering at Venice Film Festival in September (where it picked up the grand jury prize) and being named as Italy’s Oscar submission, The Hand Of God is Sorrentino’s ninth feature — but the first that is directly and declaredly autobiographical.

It tells the story of a sensitive teenager growing up in 1980s Naples, when gifted Argentinian soccer player Diego Maradona — infamous for his controversial ‘Hand of God’ goal in the 1986 FIFA World Cup — arrived to turn around the fortunes of struggling local club SSC Napoli.

Scotti was born a few days before the end of the last millennium in a small town on the shores of Lake Como, to Neapolitan parents who moved back to the southern Italian city when he was four. He began acting in school, then in Naples’ theatre scene, going on a tour of Italy with a role in Shakespeare’s Titus Andronicus straight after his applications to three of Italy’s top acting academies were all turned down.

Scotti continued to learn on the job. After his theatre apprenticeship, the six episodes of 17th-century witch drama Luna Nera taught him, he says, that “acting in front of cameras is tough… I hadn’t expected it would be so difficult to deliver emotion in the midst of chaos.” But he regards the two-month shoot of The Hand Of God in the late summer/early autumn of 2020 as his first real masterclass.

It is a film that asks a lot from its young lead, who is in nearly every scene. On Scotti’s first day, Sorrentino shot an emotional scene between the actor and veteran star Toni Servillo “maybe 13 or 14 times… and the problem was me, not Toni, who is one of the greats”.

The next day, on the island of Stromboli, Scotti was due to shoot a key sequence with Marlon Joubert, who plays his older brother: essentially the siblings’ parting of ways. During the take, Scotti says that he “looked Marlon in the eyes and thought, ‘He really is my brother,’ and maybe for the first time in my life I felt a real emotion coming through an artificial construct.”

For Sorrentino, Scotti was perfect for the role. “He was really good, but also shy and fairly insecure,” the director recalls, “and his shyness and sense of inadequacy is exactly how I remember feeling at that age.” The actor himself was struck by the trust the director placed in him. In the month between offering Scotti the role and the start of the shoot, Sorrentino limited his advice to watching two films — Francois Truffaut’s The Man Who Loved Women and Sam Mendes’s Road To Perdition. It was partly the father-son relationship in Mendes’s crime drama that interested the director, Scotti reveals, but also a less obvious detail. “He was keen for me to study the stooped, swaying walk of Jude Law’s character.”

Scotti — who names Wes Anderson, Xavier Dolan and Julian Schnabel as filmmakers he would be thrilled to work with some day — is trying not to be fazed by the buzz that is swirling around The Hand Of God. The film, however, has already earned the young actor his first major prize: Venice’s Marcello Mastroianni award for best performance by an emerging actor or actress.

“The prize was a real honour,” says Scotti, “but whatever happens in the future, the most important thing for me about working with Paolo was the amazing learning experience. When I think back to the bleak state of mind I was in after Italy’s first lockdown, I never thought that so much could happen to me in a single year.”