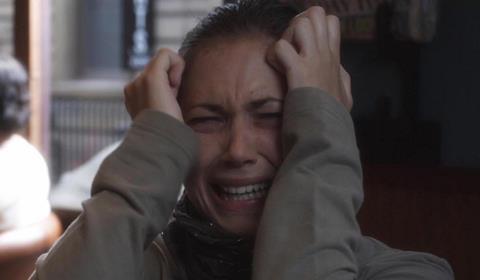 The third feature from independent British filmmaker Owen Carey Jones has commendable aspirations to create a low-key chiller in the manner of Hans-Christian Schmid’s Requiem (2006) or Johnny Kevorkian’s The Disappeared (2008). Sadly, however, The Spell fails to deliver either full-blooded thrills or fully-realised psychological drama.

The unfamiliar cast, modest budget and flat handling of the story are unlikely to provide the kind of marketable elements that might have appealed to diehard genre fans and it is hard to imagine the critical support that would have been essential to attract the curiosity of a paying audience. Carey Films is self-releasing theatrically in the UK on October 2nd.

A taste of black magic and a flash of nudity create all the wrong expectations, hinting at the prospect of a conventional satanic shocker that never materialises

Based on the true experiences of Emma Whale, the film starts in Dennis Wheatley territory with a candlelit circle of disciples in the woods listening to an incantation. A taste of black magic and a flash of nudity create all the wrong expectations, hinting at the prospect of a conventional satanic shocker that never materialises. The spell is quickly broken by the first of several intrusive musical numbers on the soundtrack with bizarre lyrics (”she’s a nutter, she’ll end up in the gutter” , ” I never had no fun and my heart it weighs a ton” etc)

The film then settles into a half-hearted stab at social-realist drama as Jenny (Rebecca Pitkin) tells a psychiatrist of her unhappy childhood, the break-up of her parents’ marriage and how her adolescence was spent being passed between them like an unwanted parcel. We are clearly meant to assume this is a woman on the edge but flat dialogue and drab visuals work against any kind of emotional engagement with a rather whiny central character.

A good third of the film has passed before any hint of the supernatural surfaces. When Jenny dumps errant boyfriend Rick (Pietro Herrera) he tumbles into the arms of the predatory Kate (Laura O’Donoughue) who offers to cast a spell that is guaranteed to reunite him with Jenny. Soon Jenny is subject to all the frequently parodied horror genre ingredients of inanimate objects that take on a life of their own, a plague of dead flies and a rumbling growl of a voice that seems to emerge from deep within her, just like Regan in The Exorcist.

The intention behind The Spell may have been to ground this young woman’s nightmare in a mundane sense of everyday life but the result is a film that feels underwhelming throughout. The dialogue lacks bite, the pace is unvarying and Jones’ direction fails to build any kind of suspense or intensity. The performances range from the shaky to the adequate, with nobody displaying the kind of charisma that allows them to shine. Rebecca Pitkin copes with all the shivering, snivelling and petulance demanded of her character but she still doesn’t make us believe in the horror of what is happening.

Jones worst failing may be a particularly lame, matter-of-fact ending, leaving the audience with an indifferent shrug rather than any sense of closure.

VERDICT: Fails to cast any magic