The story behind silent Oscar animation hopeful 'The Red Turtle'

We investigate the unusual back-story of this beautiful and unconventional animated feature. 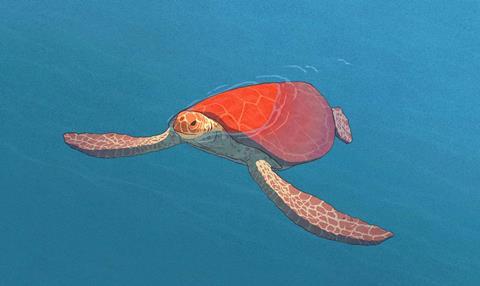 Michael Dudok de Wit’s unprecedented partnership with Studio Ghibli helped the Dutch film-maker chart new waters for his feature debut The Red Turtle. He talks to Tiffany Pritchard about the decade-long process, how he shaped the story and Isao Takahata’s guiding hand.

In addition to joining the select few modern films that have stripped away all dialogue, Michael Dudok de Wit’s animated feature The Red Turtle also marks the first film for which legendary animation house Studio Ghibli has forged co-production ties outside of its native Japan.

The venture has proven successful, with the film receiving the Un Certain Regard special jury prize in Cannes, and audience award and jury special mention honours at the Athens International Film Festival in September.

US distributor Sony Pictures Classics is adding to its awards momentum, giving it an Oscar-qualifying run in Los Angeles and New York. (The film has already been released in France, the Netherlands and Japan.)

“For a small arthouse film, it’s not doing too badly,” says Dudok de Wit (below), the director behind the film who was Oscar-nominated for short The Monk And The Fish (1995), which he followed with an Oscar win for short Father And Daughter (2001).

Inspired by the 1960s black-and-white television series The Adventures Of Robinson Crusoe, Dudok de Wit’s 80-minute feature tells a humanistic story of one man trapped on an island. “I grew up in a small village [in Utrecht, the Netherlands] and believe we are all innately a part of nature. It’s not meant to be deeply metaphorical or a statement about climate change, it’s just something I feel strongly about.”

The Red Turtle’s 10-year journey has come with surprises and challenges. It began in 2006, when Dudok de Wit received a letter from Studio Ghibli, in which the team expressed its adoration for Father And Daughter, likening it to a Japanese film. Ghibli requested permission to distribute the short in Japan, and also asked if the director would be interested in co-producing a feature film with the studio and Wild Bunch.

“I remember thinking: ‘If ever there was a time to make a feature film, this was it.’ They [Studio Ghibli] make director’s films,” says Dudok de Wit, whose previous aspirations to make a feature had been muted by the financing struggles he observed with other friends’ projects.

Ghibli proposed he choose both the story and animation style, and that he make the film in Europe. For a studio that had never veered outside of its stable - which involves more than 20 features in its signature 2D hand-drawn house style - the offer was a leap of faith.

Initial ideas centred around making an extension of Father And Daughter but, given ultimate control to make the film he wanted in the initial development stages, Dudok de Wit started to think bigger and bolder.

Isao Takahata (The Tale Of The Princess Kaguya), co-founder of Studio Ghibli with Hayao Miyazaki, was appointed as the liaison to Dudok de Wit, and the two conversed via letters (and several trips to Tokyo) on character development, the overarching story conflict and small but pertinent details of the narrative.

“[Isao] Takahata had to think about how to work with a director without himself directing,” said the company’s former president and now-producer Toshio Suzuki in Cannes this year. “I told him, ‘Michael is requesting your help [on his first feature], so you should offer your co-operation’.”

“There was a level of trust in working with Takahata,” says Dudok de Wit. “Sometimes he would give his opinions more forcefully, but he would always say at the end, ‘Michaelsan, you are the director, you decide.’”

Lay of the land

Dudok de Wit travelled to the Seychelles to gain inspiration for the story’s wild terrain. The script was written quickly, and then verbally submitted to Ghibli.

The more lengthy animatic stage followed, during which pencil sketches were created to visualise how the characters and landscapes would initially look, and the story was further padded out. Dudok de Wit’s struggles began with the pacing.

“I had made the classic mistake; my script was too detailed,” says Dudok de Wit. “And every time I changed something, I would have to redraw. The writing process took me a long time; I had over 10,000 drawings.”

“We met with each other for months, trying to work out how to keep the elements of isolation without affecting the rest of the story,” says Dudok de Wit. “She was also instrumental in further developing the female character. We went through this process of adding in more dialogue as we didn’t want her to be too mysterious. When I presented it to Takahata - after a lot of back-and-forth conversations with Studio Ghibli - he came back suggesting the alternative, to do away with the dialogue altogether.”

While Dudok de Wit was initially sceptical, explaining audiences wouldn’t fully understand the characters’ emotions, he and his animation team realised it was unnerving after a period of silence to hear them suddenly speak in French. “We decided to instead have the voice actors breathe and scream, when relaxed or distressed. Immediately, that made them more real,” the film-maker explains.

Suzuki adds, “We have this way of working that if the animation can’t express what you want, then it’s not working. And since his animation is so emotional and so powerful, the more we thought about it, the more we liked this bold idea of removing the dialogue.”

Dudok de Wit was introduced to the Cintiq - a digital pen that allows you to draw on a tablet - while making The Red Turtle at Prima Linea studios in Paris and Angouleme.

He tried two versions of a shot, one with pencil on paper and the other with the digital pencil. “I liked the line of the Cintiq better,” he explains. “And if you want to change something, you don’t have to rub it out, redraw and rescan. It also had huge advantages when zooming in or flipping the characters.”

He specifically refers to the vibrant red turtle of the film’s title; the creature was influenced by his marine experiences in the Seychelles. Playing an integral role in the transformation of the lead character’s life, the creature was carefully developed entirely in 3D digital animation by head animator Jean-Christophe Lie, whose credits include Tarzan and The Hunchback Of Notre Dame.

“The turtle was unique - to hand-draw it turning slowly would have been nearly impossible. So we opted for digital, but it was important to me that it looked hand-drawn to the general audience,” says Dudok de Wit. “I was very ambitious as I chose an animation design style that is difficult for all animators. I wanted the film to look beautiful, rather than cartoony,” he continues, referencing old-style 2D animation used in films such as Sylvain Chomet’s The Illusionist.

The backgrounds were referenced by photos from the Seychelles and bamboo forests around Japan and France, and were constructed from charcoal drawings using broad strokes and smudges of the hand. A colour board was also created, representing a transition from the muted colours of the inhospitable island to a rich blend of blues, reds and greens appropriate for emulating the lead character’s story arc.

The final stage was the compositing phase, in which the drawings, backgrounds and special-effects were combined into one unit. To tap into tax incentives, this was completed in Belgium over five months.

While Dudok de Wit is taking a much-needed break, Studio Ghibli is looking to a potentially new future. “We are used to working hand-drawn,” says Suzuki. “But Michael showed us another way.”

Miyazaki himself recently attempted 3D animation for an in-house short film for the Ghibli Museum, and may continue to embrace new approaches. The 75-year-old director/ animation chief has recently returned from retirement to direct a feature-length extension of his CG short Boro The Caterpillar, a story that has been in the pipeline for around 20 years.

“He [Miyazaki] is used to doing things one way,” says Suzuki. “But the younger animators are teaching him another. Whether you like it or not, you cannot avoid the use of technology with animation.”