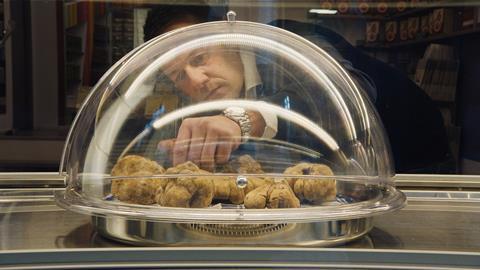 ‘The Truffle Hunters’ filmmakers on unearthing a secret world

Finding the men who search for northern Italy’s rare and precious white truffles was a hunt in itself. The US filmmaking duo Michael Dweck and Gregory Kershaw had been editing their previous feature doc The Last Race in Copenhagen in summer 2017. They each went on holiday, separately, for a break.

Dweck recalls telling Kershaw, “I was just visiting this magical place where these 85-year-old men, supposedly that no-one has ever seen, go around these mountaintops at night, hunting for truffles.”

Kershaw, remarkably, had visited the same village in northern Italy’s Piedmont region two weeks earlier. The pair had found the subject of their next film.

Dweck and Kershaw were filmmakers more than foodies but they quickly learned about these rare fungi, a world away from the mass-produced truffle oil that most consumers have tasted. “The white truffle can’t be cultivated, it’s one of the few things on earth that we consume that’s sort of beyond the powers of science,” says Kershaw. “That’s why they are worth almost as much as gold per kilogram. And that’s part of the reason why we made this movie, because there’s magic to how these truffles come out of the ground.”

That is also why the world is so secretive, often involving octogen­arians combing forests for truffles under cover of night. Even some of the restaurateurs who buy their truffles never meet them. “Everything in this world is secret,” explains Dwyer.

“Finding the truffle hunters and then gaining their trust was really the first year of production,” says Kershaw. Neither American spoke the local dialect so they used a translator, concentrating the shoot in three villages: Santo Stefano Belbo, Monforte d’Alba and Roddino. “When we come across someone we want to film, we start by building a relationship, a friendship. We exchange ideas,” says Dweck.

“As the relationship grows,” adds Kershaw, “we become both observers and participants in their lives. We share meals, watch them work, and see how they interact with their community and loved ones. So when we do start filming, we can disappear behind the camera and watch life unfold in front of us.”

Dweck and Kershaw are both cinematographers, and it helped to build their subjects’ trust that they shot the film themselves. “We’ve taken a unique approach to building this film,” explains Dweck. “Each image is deliberately framed and composed in a way that allows the action to unfold in front of the lens. That came from this place and the way it spoke to us. The light had to be perfect, so that took patience and time. Almost every scene in the film was covered with just one shot.”

“We constructed the images to reflect the feeling of moving through this place that felt to us like a real-life fairytale,” adds Kershaw, citing inspirations as diverse as the painter Caravaggio and Vittorio De Sica’s 1952 film Umberto D.

The pair also created camera harnesses for the dogs — crafted by a local cobbler and metal worker — to capture POV of the canines. “It was important the audience sees the dog’s perspective to understand how they react to the forest,” explains Dweck.

Sound design was crucial for the forest scenes. “We wanted to immerse the audience into this environment, the way we felt when we were there,” says Dweck. “Sound had a lot to do with that.”

“We recorded a lot of sounds beyond the dialogue,” adds Kershaw. “These villages, forests and valleys sound like no other place in the world.”

The duo produced the film through their Beautiful Stories banner alongside Bow + Arrow Entertainment and Park Pictures (filmmaker Luca Guadagnino is a new truffle-hunting enthusiast and came on board as an executive producer). Sony Pictures Classics announced a $1.5m worldwide deal for the film during Sundance 2020. It releases in the US on March 5 having completed an awards-qualifying run in December; the UK release is set for April 9.

Dweck and Kershaw’s most anticipated audience is yet to come — they hope when it is safe to travel again they can take the film to Piedmont and show it in a local cinema near where the trufflehunters and their families live.

“Some of them have never seen a movie before, they live up in these beautiful isolated farms,” says Dweck. “So this is going to be quite an experience.”