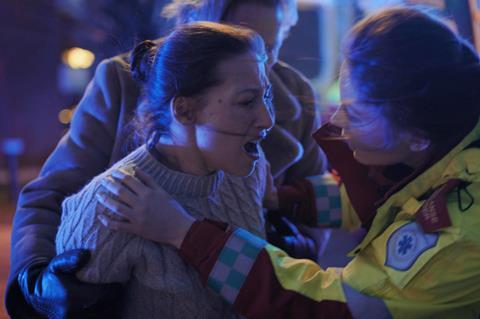 Tuva Novotny makes her directorial debut with Blind Spot (Blindsone), a harrowing real-time exploration of one family dealing with a tragedy.

Pia Tjelta, Anders Baasmo Christiansen and newcomer Nora Mathea Øien star in the story of parents who have a “blind spot” about the mental health crisis of their daughter. The film is shot in one take, as the story unfolds in real time; the professional actors star alongside real healthcare professionals, from ambulance workers to ER doctors.

Novotny, born in Sweden but living in Denmark, is also an actress; her recent credits include Annihilation and 2017 TIFF opener Borg McEnroe. She has already shot her second film as a director, the bigger budget Fredrik Backman book adaptation Britt-Marie Was Here, for SF Studios.

TrustNordisk handles sales on Blind Spot, which has its public premiere on Sept 10 in TIFF Discovery. After TIFF the film will compete in San Sebastian.

How did the idea come about?

There had been some situations in my life with people close to me concerning this topic, and this movie just came out in one first draft, I knew exactly how it would be.

Why did you want to tell it in real time?

It a clear vision of not wanting to dramatise with editing, because editing is such a strong tool. We are in a tradition where we don’t give time for the eye to discover what we are watching. I wanted to explore the pauses and silences and the “boring” parts we take away, that’s where we get to understand people and let our imaginations work. And also I wanted to explore for the actors to be in the situation.

What was most important to me to not overly dramatise a situation that needs to be talked about in such a sober way. There can be romanticizing of the subject matter and putting a halo around it. That’s not really healthy. We need to talk about mental illness but we need to talk about how do we address it.

Logistically, was it really shot in one take or is it a ‘faked’ one take?

It sounds crazy. At first I wanted just one camera, but considering the different locations that was technically impossible.

The doctors, the ambulance people knew how to work this situation, where to go, what to do, there was no hesitance in what was going to happen. The story was told in an organic way. The biggest challenge was for the actors and the crew to overcome their nervousness [at working this way].

We shot it three times, we weren’t able to cut in between because of lighting or continuity.

The film is the actually the third shoot. But number two was also magical – we had beautiful snow that day and also the sun was out. I had promised my psychological supervisors not to romanticise the subject matter.

How did you manage the locations?

To me it was nerve wracking to be in the not controlled areas, like walking from the school to the apartments. We couldn’t block that off with a 100 person staff. Or you can’t control a park for 20 minutes. The hospital was only partly closed off, it was a real working hospital so there was some activity at the end of the hallways.

And you used real doctors?

The trauma team inside the operation room that’s real ER people, dthe octor is a real doctor, the nurse is a real nurse, everyone is a non-actor except the parents and girl and grandfather.

How did you cast Pia Tjelta as the mother, and how did you prepare with her?

She’s one of my best friends has acted for 20 years. It’s a difficult role so it was a great strength that we know each other from before that we are close friends.

It was daring to let go of the experience you have and getting back to the roots of what acting is. Like Stanislavsky, to really be in it, from inside out. It was very challenging for all of them, it was hard for them not to fill the silences.

A lot of the rehearsal time was just to lose the experience hey had, and talking about it, and I wanted them to just be and not act.

What research did you do about mental health?

I mainly just talked to professionals from the health sector – psychologists, psychiatrists, nurses, neurosurgeons, I had a lot of research from factual people. The mission of the movie is to open up a discussion about how we talk about these things.

How did you work with the medical team?

It was such a nice meeting between the medical team being nervous about not being able to act, and the actors being nervous not to be able to be in the situation. They learned from each other. I asked them to do what they usually did, they helped me a lot with the routines.

Why was Blind Spot the right title?

I kept talking about the blind spots in our everyday lives, stuff we don’t see or know how to talk about. It’s about how we as grownups in society talk about these situations, how do we handle it.

I made my second movie right after this, Britt Marie, which is traditionally shot nd edited – and we’re in the edit now. The story is about a 63-year-old lady who starts over again in life, she leaves a 40-year old marriage and lives her own life. It’s important movie in that sense. Theses days we talk a lot abut female representation in our business but we don’t see much of it. This movie will be a very good opportunity to contribute that.