Venice 2018 preview: Screen's guide to Out of Competition titles

The 75th Venice Film Festival starts on August 29, running until September 8, and Screen is previewing all the titles in the main sections. Below are the Out of Competition films, including Bradley Cooper’s A Star Is Born and Orson Welles’ resurrected The Other Side Of The Wind. 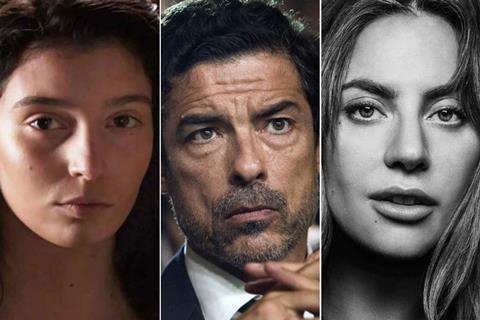 1938 Diversi (It) - dir. Giorgio Treves
Due to broadcast on Italy’s Sky Arte this autumn, Treves’ 62-minute documentary marks the 80th anniversary of Italy’s 1938 Race Laws when, arguably under pressure from his German allies, Mussolini introduced a series of measures persecuting Jews in a country that was not traditionally antisemitic. Producers Tangram Film was last in Venice in 2016 with Perché Sono Un Genio! Lorenza Mazzetti, a documentary on one of the founders of the British Free Cinema movement, herself the survivor of an SS massacre of Italian Jews.
Contact: Tangram Film

American Dharma (US-UK) - dir. Errol Morris
No stranger to ruffling feathers with his profiles of imposing US political figures, Morris trains his sights on Steve Bannon, arguing that despite his policies, the greatest danger might lie in ignoring Donald Trump’s former chief strategist. Morris attended Venice in 2013 with The Unknown Known, about former US defence secretary Donald Rumsfeld, and won the Oscar in 2004 with The Fog Of War. Endeavor Content reps US rights.
Contact: PJ van Sandwijk, producer

Carmine Street Guitars (Can) - dir. Ron Mann
Toronto native Mann presents his first film since Robert Altman doc Altman, which played at his hometown festival in 2014. Produced through Mann’s Sphinx Productions, Carmine Street Guitars tells the story of the renowned guitar shop in Greenwich Village, New York that has been a fixture in a changing area since 1990. Musicians Eszter Balint, Wilco’s Nels Cline and The Kills’ Jamie Hince all feature, as does filmmaker Jim Jarmusch.
Contact: The Match Factory

Il Diario Di Angela – Noi Due Cineasti (It) - dir. Yervant Gianikian
Partners in work and in life, Angela Ricci Lucchi and Yervant Gianikian were among the pioneers of moving-image art in Italy, more at home at the Art Biennale than its cinema cousin. After Lucchi’s death earlier this year, the Italo-Armenian Gianikian dipped into the personal diaries of his companion of more than 40 years and revisited their work together to create this 90-minute video tribute, showing at Venice as a Special Event. The film was produced by Beatrice Bulgari’s film-art crossover operation In Between Art Film.
Contact: In Between Art Film

Dragged Across Concrete (Can-US) - dir. S Craig Zahler
Zahler returns to the Lido after Brawl In Cell Block 99 played here last year, likewise out of competition. He reunites with Brawl star Vince Vaughn, who plays the younger cop to Mel Gibson’s old-timer in a thriller that sees them both suspended from the force and descending into a criminal underworld. Lionsgate distributes through Summit Entertainment in the US.
Contact: Bloom

Introduzione All’Oscuro (Arg-Aust) - dir. Gaston Solnicki
Solnicki won the Fipresci prize on the Lido two years ago for his Horizons selection Kekszakallu and follows up with the story of a filmmaker who becomes overwhelmed by the sober grandeur of Vienna when he is invited to pay tribute to a late friend and composer. Lin Han-gyeol, Alexandra Prodaniuc, Karin Krank, Solnicki, Man Ka-ming, Walter Bergman and Alan Segal star.
Contact: Rei Cine

Isis, Tomorrow. The Lost Souls Of Mosul (It-Ger) - dirs. Francesca Mannocchi, Alessio Romenzi
One of the more exportable-looking Italian titles screening at Venice this year, this documentary follows the battle-trained children and abandoned widows of Isis militiamen who were left behind after the fall of Mosul to Iraqi government forces in 2017. Produced by experienced Italian firm Wildside, the feature debut of Italian reporter Mannocchi and war and migration photographer Romenzi was pounced on by Tel Aviv-based sales company Cinephil a few days after the festival line-up was announced.
Contact: Cinephil

My Brilliant Friend (It-Bel) - dir. Saverio Costanzo
The highly anticipated HBO-Rai adaptation of Italian literary sensation The Neapolitan Novels by pseudonymous author Elena Ferrante is being unveiled on the Lido, where the first two episodes from volume one of the Neapolitan Novels quartet, My Brilliant Friend (L’Amica Geniale), will screen. It is produced by Lorenzo Mieli and Mario Gianani for Wildside and Domenico Procacci for Fandango, and executive produced by Jennifer Schuur. The director is Hungry Hearts filmmaker Costanzo. The eight-part series will be a test case for US broadcaster HBO as its first subtitled offering. Some Italians may even need on-screen prompts, as dialogue is in a broad Neapolitan dialect.
Contact: FremantleMedia

My Masterpiece (Arg-Sp) - dir. Gaston Duprat
Duprat returns to the scene of his 2016 triumph, when The Distinguished Citizen earned the best actor prize for Oscar Martinez. My Masterpiece (Mi Obra Maestra) stars Argentinian comedian and The Clan lead Guillermo Francella as an unscrupulous art dealer who hatches a plan with his longtime friend and painter. Argentina’s Arco Libre and Spain’s Mediapro produce.
Contact: Latido Films

One Nation, One King (Fr-Bel) - dir. Pierre Schoeller
Writer/director Schoeller made a mark in 2011 with The Minister, a political drama that premiered in Un Certain Regard at Cannes. He returns with One Nation, One King (Un Peuple Et Son Roi), an ambitious evocation of events during the French Revolution. Gallic cinema has been here countless times, but Schoeller scores with a blue-chip cast that includes Louis Garrel as Robespierre, Denis Lavant as Marat and Laurent Lafitte as Louis XVI, alongside Gaspard Ulliel, Adele Haenel and Olivier Gourmet. Denis Freyd produces this Archipel 35/Films du Fleuve title.
Contact: Laurence Lascary, Studiocanal

The Other Side Of The Wind (US) - dir. Orson Welles
Netflix and its deep pockets have built a time machine. More than 30 years after the death of Orson Welles left The Other Side Of The Wind incomplete, cinephiles will finally get to see the satire about a director struggling to mount a comeback. John Huston and Peter Bogdanovich star. Netflix stepped in last year to fund post-production in Paris and helped untangle rights issues that tied lead producer Frank Marshall — a production manager on the original 1970s shoot — in knots for years.
Contact: Netflix

Process (Neth) - dir. Sergei Loznitsa
After winning the Un Certain Regard prize at Cannes with drama Donbass in May, a year after his previous film A Gentle Creature played in Competition there, Ukrainian filmmaker Loznitsa brings his latest feature to premiere in Venice. The documentary presents archive footage from the 1930s when top-ranking Soviet economists and engineers were put on trial accused of plotting against Joseph Stalin’s government. Process is produced by Atoms & Void, Loznitza’s own Hague-based production outfit.
Contact: Atoms & Void

La Quietud (Arg-Fr) - dir. Pablo Trapero
Trapero’s drama starring Bérénice Bejo and Martina Gusman as estranged sisters who reunite had been tipped to premiere in Cannes and yet the Lido seems a logical fit, given the Argentinian filmmaker won the best director prize there in 2015 with The Clan. Sony Pictures International Productions co-produces with Trapero and Gusman’s Matanza Cine and Telefe, and will distribute in the US, Argentina, Brazil, Chile and Uruguay. Sony also holds Latin American TV rights.
Contact: Eva Diederix, Wild Bunch

A Star Is Born (US) - dir. Bradley Cooper
Janet Gaynor/Fredric March, Judy Garland/James Mason, Barbra Streisand/Kris Kristofferson and now… Bradley Cooper and Lady Gaga. Early word diverges wildly on Cooper’s directorial debut, yet anticipation surrounds Gaga’s first major film role as the ingénue who outshines her hard-drinking mentor. Chasing a wide commercial audience, the filmmakers have cleverly set country music as the backdrop, and Warner Bros are gearing up for a major awards push. Opens in the US and UK on October 5.
Contact: Warner Bros

The Summer House (Fr-It) - dir. Valeria Bruni Tedeschi
After a 2016 documentary and a TV version of Chekhov’s Three Sisters, French-Italian actress and filmmaker Bruni Tedeschi returns to the comic territory of her 2013 Cannes Competition title A Castle In Italy. She stars as Anna, a film director in crisis, who retreats to the French Riviera only to contend with a whirlwind of family life. Aka Les Estivants, cast includes Valeria Golino, Pierre Arditi, Yolande Moreau and Bruni Tedeschi’s co-writer on the film, Noémie Lvovsky. Alexandra Henochsberg from Ad Vitam and Patrick Sobelman from Ex Nihilo produce.
Contact: Playtime

They’ll Love Me When I’m Dead (US) - dir. Morgan Neville
Netflix is doubling down on Orson Welles with Venice documentary companion piece They’ll Love Me When I’m Dead. The film by Oscar winner Neville (20 Feet From Stardom) follows the icon during the final 15 years of his life as he tries to mount a comeback, leaving behind one of the most famous unfinished films in cinema history. Frank Marshall, who produces The Other Side Of The Wind, serves as executive producer.
Contact: Netflix

A Tramway In Jerusalem (Is-Fr) - dir. Amos Gitai
Israeli filmmaker Gitai is no stranger to Venice — his numerous appearances include six times in Competition, most recently with Rabin, The Last Day in 2015. A Tramway In Jerusalem takes place on a track that connects several of the city’s neighbourhoods, and stars Mathieu Amalric and Pippo Delbono. Gitai also has short A Letter To A Friend In Gaza, which premiered at Jerusalem Film Festival, playing out of competition.
Contact: Orange Studio

Your Face (Taiwan) - dir. Tsai Ming-liang
After debuting VR film The Deserted at Venice last year, Tsai pushes the cinematic language further with an innovative project consisting only of close-ups of 12 people, including his longtime muse Lee Kang-sheng. Tsai calls it neither a documentary nor a narrative film. The music is by Oscar-winning composer Ryuichi Sakamoto, marking Tsai’s first use of film score since his debut in 1992. Your Face (Ni De Lian) is his eighth film in Venice; he previously won the 1994 Golden Lion for Vive L’Amour and the 2013 Grand Jury Prize for Stray Dogs.
Contact: Homegreen Films