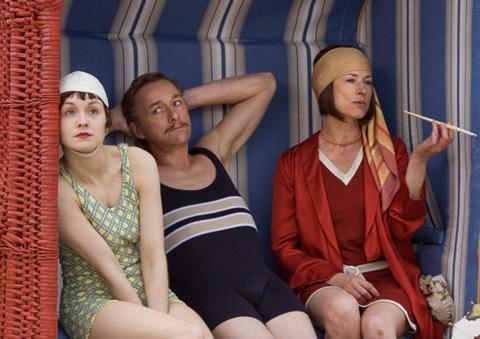 Following on from his arthouse hit Cloud 9, Andreas Dresen, one of Germany’s better known directors, attempts a comedic satire on film-making in Whisky With Vodka.  Tracing the conflicts and jealousies which take place on the set of a period situation comedy, Dresen comes pretty close to achieving his goal but doesn’t quite deliver the irony, insights or pain required.

Popular, older, heavy-drinking actor Otto (Hubchen) is forced to accept a double (Hering), with the threat that he’ll take over the part if Otto doesn’t toe the line. Otto once had an affair with his co-star Bettina, (Harfouch) now married to hypocritical director Telleck (Groth). This gives rise to further complications.

Whisky With Vodka presents romantic entanglements on- and off-screen, musings on the quality of acting and thespian insecurity, reflections on old age and the approach of death. All the ingredients, in other words, for a German Day for Night, but none are sufficiently sharp or pertinent to generate any kind of emotion or curiosity about the characters.

Thanks to high-class technical credits all the way through, and professional though rather impersonal performances by an experienced cast, Dresen’s film may well enjoy a decent theatrical release, particularly in German-speaking markets. It is likely to settle best in the digital marketplace, however.