Zhou Quan on 'End Of Summer' 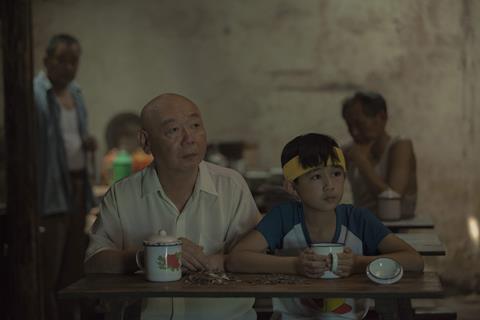 Receiving its world premiere in BIFF’s New Currents competition, Zhou Quan’s debut feature End Of Summer is set in the Chinese city of Shaoxing against the backdrop of the 1998 World Cup.

The story revolves around three generations of Chinese men – a lonely young boy, his hard-working father who is too busy to pay him much attention, and an elderly neighbour who is missing his own grandson.

The boy and the neighbour bond over their obsession for football, watching the World Cup matches in secret, as the boy’s father wants him to focus on homework not sports. Meanwhile, the neighbour fiercely resists attempts to knock down the ‘taimen’ or traditional courtyard they all live in to make way for a new block of flats.

“The late ‘90s was a time of rapid change for modem China,” says Zhou, who grew up in Shaoxing in a similar courtyard. “In addition to urbanisation, it was the time of the Hong Kong handover and a change in leadership after the death of Deng Xiaoping. But as a small boy, I was more impressed that 1998 was the first time that the World Cup was broadcast on Chinese TV in its entirety. Before then we only got clips.”

Zhou moved to Australia in his high school years and later studied at the Royal Melbourne Institute of Technology (RMIT) where he started making short films. During this time he met John Woo’s long-time producer Terence Chang through an actor in one of his films. Chang offered him advice on his career and Zhou consequently decided to study directing at the American Film Institute (AFI) in Los Angeles.

After graduating in 2013, Zhou started developing story ideas with his AFI classmate and producer Jacqueline W. Liu. Deciding to draw on his own experience, he started writing End Of Summer with Columbia University graduate Yimei Huang.

“My generation was really influenced by the one child policy – I was the only kid in my family, and my parents were busy working for the government, so I spent a lot of time by myself,” Zhou explains. “Loneliness was almost a defining emotion for my generation. So I wanted to explore what it would have been like to have this other, rather unlikely, kind of friend.

Chang and renowned editor Liao Ching-song (The Assassin) both came on board as executive producers and the project won a HAF Award at the 2015 edition of the Hong Kong Asia Film Financing Forum (HAF). But Liu says they still struggled for a few years to raise finance for the film. “Investors said the film wasn’t arthouse enough or mainstream enough – it fell somewhere in between,” Liu explains. “They liked his short films and tried to convince him to take on commercial projects, but we really wanted to make this film.”

Eventually the duo raised finance from a Shaoxing textile company and pulled together a cast that includes Zhang Songwen and Tan Zhuo, who both starred in Lou Ye’s Spring Fever, and Rong Zishan (Mountains May Depart) who plays the kid. In the rough cut stage, the film was selected for HAF’s 2017 Works-in-Progress Lab, where it found a sales agent, Be For Films, and Tencent Penguin Pictures boarded as co-producer and helped with the post-production of the film.

Following its BIFF premiere, the film will screen in Rome Film Festival’s Alice Nella Citta sidebar and has also been booked for Hong Kong Asian Film Festival, Brussels and Minsk. Tencent Penguin Pictures is planning a Chinese theatrical release in the first half of 2018.

“Next year is the 20th anniversary of the World Cup in China, so we really hope to release it before the 2018 World Cup in Russia,” Zhou says.

For their next project, Zhou and Liu are developing a 10-12 episode TV series, Searching For The Silent Maiden (working title), which was selected for the Taipei Golden Horse Film Project Promotion in 2016.

“Initially, we intended to make the project as a movie, but felt it needed a longer format to develop the characters as it’s a psychological thriller,” Liu says. “In the past, China has always produced huge, long 40-episode TV series, but the trend is changing now, and shorter series are really hot.”